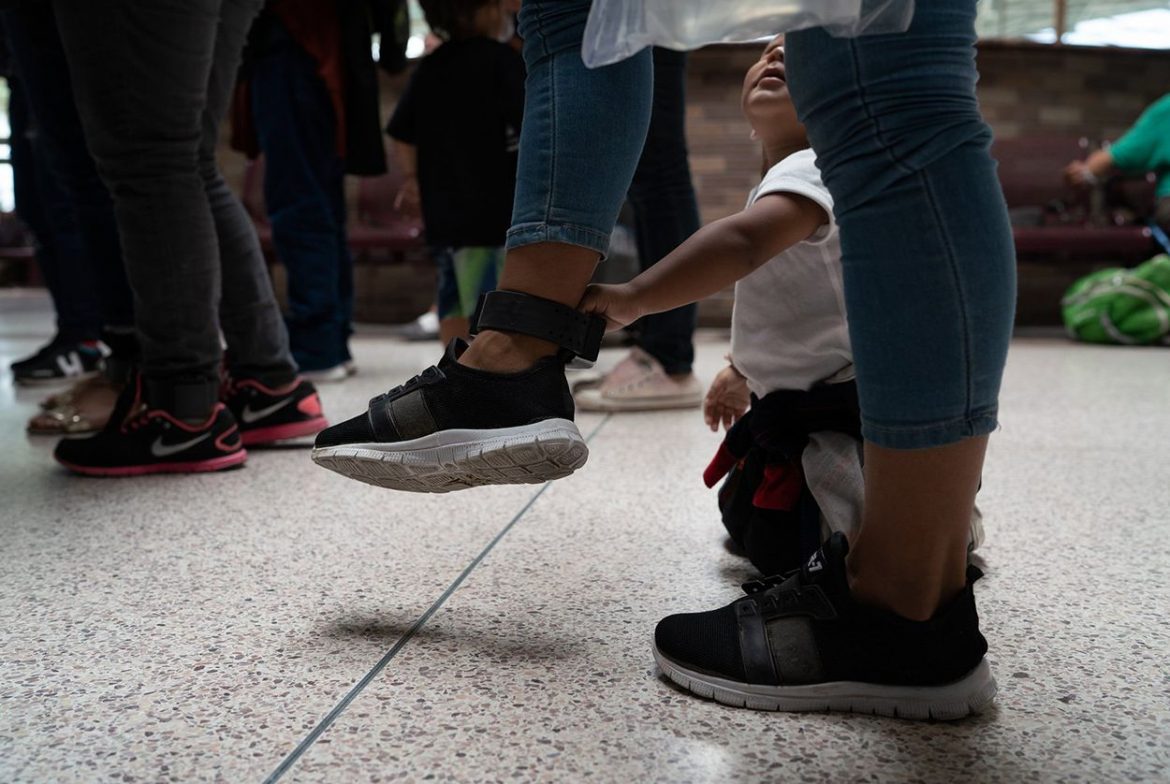 Central American asylum seekers wait at the bus station in McAllen to be taken to the Catholic Charities Humanitarian Respite Center on August 2, 2018.

MCALLEN — Every afternoon, dozens of immigrant families released by the U.S. government walk three blocks from the Greyhound bus station in this South Texas border city to a migrant shelter run by Catholic Charities.

Along with the clothes slung over their shoulders, the migrants sometimes carry government-issued containers — dark-blue receptacles resembling lunch boxes, with plastic handles that shine in the mid-afternoon sun.

On the front of each container, the black-and-white logo of the GEO Group, the for-profit prison corporation that operates immigrant detention centers in the United States, hints at the contents: power cords required to charge the electronic tracking bracelets that tens of thousands of migrant adults, including most of the asylum-seekers who come through McAllen, are required to wear around their ankles so that U.S. Immigration and Customs Enforcement can monitor their whereabouts between court dates.

Migrants are quick to acknowledge that they would rather wear ankle monitors than sit in a detention facility, and those who wear them almost always show up for required hearings, according to ICE data. But the devices can disrupt almost every aspect of daily life, from sleeping and exercising to buying groceries and getting a job, according to more than a dozen attorneys, immigrant advocates and Central American asylum-seekers.

Jose Santos Garcia, a 27-year-old asylum-seeker from El Salvador who crossed the border with his 8-year-old daughter, Brenda, received a jet-black ankle monitor and a charger packaged in styrofoam when he was released in McAllen at the end of June.

“At least for me, it’s humiliating to carry it — really like some prisoners, on house arrest,” Garcia said. “Just for entering another country, looking for opportunity, I have to carry this.”

As recently as eight weeks ago, families who crossed the border illegally, often fleeing violence and poverty in Central America, were separated at Border Patrol facilities, with parents handed to the Department of Justice for prosecution and children transferred to shelters for immigrant minors under a “zero tolerance” policy enacted by the Trump administration in the spring. Amid widespread outcry, President Donald Trump ended the family separations in late June, effectively restoring a more lenient system in which migrant families are allowed to leave detention while their asylum claims are processed.

Conservative critics dismiss this practice as “catch and release,” and Trump has called it a “disgusting” and “disgraceful” loophole in immigration law.

Adrienne Peña-Garza, the chair of the Hidalgo County Republican Party in South Texas, said she has concerns about the government’s return to the practice. Migrants “are human beings and we need to treat them as such,” she said. “But we have to encourage people to follow the law.”

For these immigrants, however, release from detention does not represent a free pass into the United States. Even though they’ve been released with their children at their sides, asylum-seeking parents face a complex set of everyday challenges once they leave government custody — starting with the devices around their ankles.

“It’s easy to think, ‘Oh, it’s just a little thing around your ankle,’” said Heidi Altman, director of policy at the National Immigrant Justice Center. “In fact, we hear from folks that it really feels like another way in which their liberty and their ability to live their life is being severely curtailed. And it’s constantly present.”

ICE spokesman Matthew Bourke described the ankle monitors as a tool to “manage individuals who may pose a flight risk, but for whom detention may not be the most appropriate option.” He noted that ICE does not assign ankle monitors to children, pregnant women or people with certain medical conditions.

But for those who do receive them, the ankle monitors are a source of near-constant inconvenience. Some models emit loud warnings in Spanish when they need to be charged, startling immigrants in the middle of the night or embarrassing them in public places. One asylum-seeker who has worn an ankle monitor for more than a year — and whose lawyer asked that his name be withheld to protect his asylum claim — said he lost a job at a construction site after his boss heard the monitor go off during work hours and worried it could put other undocumented employees at risk of deportation.

The asylum-seeker said he has to charge the ankle monitor’s removable battery pack three times a day to keep the device from blaring. The ankle monitor also prevents him from playing soccer or going swimming; although showering is permitted, the device can’t be submerged in water.

Between 2005 and 2015, law enforcement agencies across the country dramatically increased the use of ankle monitors to track pretrial defendants and convicted offenders, according to research by Pew Charitable Trusts. Earlier this year, disgraced Hollywood mogul Harvey Weinstein was forced to wear an ankle bracelet after he was arraigned on rape charges.

For its part, ICE began using ankle monitors in the mid-2000s as a cheaper alternative to immigrant detention, and now the devices are a staple of the agency’s Intensive Supervision Appearance Program. Some of the migrants enrolled in ISAP are also required to check in periodically with ICE officials, and others are subject to unannounced home visits.

“These different steps can be combined together depending on the circumstances, and some can be quite intrusive,” said Greg Chen, director of government relations for the American Immigration Lawyers Association.

More than 80,000 immigrants were enrolled in ISAP as of July 6, according to ICE. Nearly half wore ankle monitors, and the rest were required to report to ICE agents by phone. In 2014, BI Incorporated, a subsidiary of the GEO Group, agreed a five-year contract worth tens of million dollars to provide ankle monitors and supervise ISAP.

Immigrant advocates were critical of ISAP long before Trump became president. In 2016, a coalition of advocacy groups filed a civil rights complaint documenting a wide range of medical problems caused by ankle monitors, including bleeding, electric shocks and general discomfort.

One of the migrants featured in the complaint said the tracking device burned her ankle while it was charging, causing her skin to chafe. Another had to go to the hospital after her monitor produced an electric shock when she picked up a metal pan.

More than a year after the complaint was submitted, Homeland Security officials responded in a short letter that did not address the medical issues. At the time, Centro Legal de la Raza, the California-based group that spearheaded the complaint, did not have the resources to follow up with a lawsuit, said Aidin Castillo, an attorney for the organization.

Spokesmen for BI and the Homeland Security Department referred questions about criticism of the ankle monitors to ICE. Bourke said the agency considers “comfortability, flexibility and construction” during the fitting process. Immigrants can “follow up with their case officer after the initial fitting if they experience any subsequent discomfort or physical injuries,” he added.

In at least some cases, immigration officers appear to be taking steps to make the ankle monitors more comfortable for migrants. Last Friday, as he waited in line for a Greyhound bus in McAllen, Hector Hernandez, 38, said that the official who strapped on his monitor earlier in the week asked whether he wanted it loosened.

“I feel that it’s there,” said Hernandez, who came to the United States from Guatemala. “But it doesn’t really bother me.”

Ninety-nine percent of immigrants enrolled in ISAP show up for their court dates, although the program is less effective at ensuring undocumented migrants comply with removal orders, according to ICE. Immigration attorneys and advocates acknowledge that compared with traditional detention, monitors are less burdensome for asylum-seekers and more cost-effective for the government.

“It is better for the individual just in terms of well-being,” said Ashley Feasley, director of migration policy for the United States Conference of Catholic Bishops. “And it’s better, in many instances, for taxpayers.”

But that does not mean the government should strap an ankle monitor onto every migrant released from custody, attorneys and activists say. Instead, these advocates argue, ICE should enroll more immigrants, especially asylum-seekers, in something akin to the Family Case Management Program, an alternative to detention that the government launched three years ago to accommodate the wave of families fleeing gang violence in Central America.

Families placed in the case-management program, which the Trump administration abruptly halted in June 2017, were assigned social workers who helped them get lawyers, housing and transportation. Over two years, 99 percent of the enrolled families — who never numbered more than 1,600 — showed up for their court dates and ICE check-ins.

Bourke, the ICE spokesman, said the agency decided last year that ISAP, which costs roughly $5 a day per immigrant, represented “a much better use of limited resources” than the family case-management program, which cost $36 a day. Both alternatives are significantly cheaper than immigrant detention, which the Trump administration is seeking to expand as part of a broader crackdown on illegal border crossings, even though it can cost hundreds of dollars a day per immigrant.

“There’s literally nothing at all preventing the immediate restoration and expansion” of the family case-management program, said Altman, policy director for the National Immigrant Justice Center. “It’s just politics.”

In McAllen and other border cities, released immigrants generally receive one of two types of ankle monitors, according to local advocates: a bulky model that must be recharged at an outlet, forcing immigrants to sit by a wall several times a day; or a smaller, sleeker version that comes with an extra battery that can be charged separately from the monitor itself. (Bourke said BI produces multiple types of ankle monitors, but he declined to comment on the specific models, citing “law-enforcement sensitivities.”)

When he was released from detention, Garcia, the immigrant from El Salvador, appeared to have received the bulkier model, which he tried to hide under the leg of his baggy jeans as he and his daughter waited at the McAllen bus station at the end of June.

“I have seen Americans go around El Salvador free,” said Garcia, a logger and carpenter. “They don’t have to wear bracelets when they come to my country.”

Garcia said he decided to come to the United States this summer despite seeing news reports about the “zero tolerance” immigration policy. He said he traveled to the border in a van with more than a dozen others and requested asylum at a port of entry, arriving shortly after Trump put a halt to the family separations.

At the bus station, his 8-year-old daughter, Brenda, sat next to him, hugging a stuffed dinosaur as she rested her feet on top of the plastic box containing the charger for her father’s ankle monitor.

Editor’s note: The Texas Tribune and TIME have partnered to closely track the family separation crisis at the U.S.-Mexico border. This story is not available for republishing by a national news organization until August 11, 2018, at 6 a.m. Texas news organizations may run it at any time. For more information emailnchoate@texastribune.org.

“It’s humiliating”: Released immigrants describe life with ankle monitors” was first published by The Texas Tribune, a nonprofit, nonpartisan media organization that informs Texans — and engages with them — about public policy, politics, government and statewide issues.