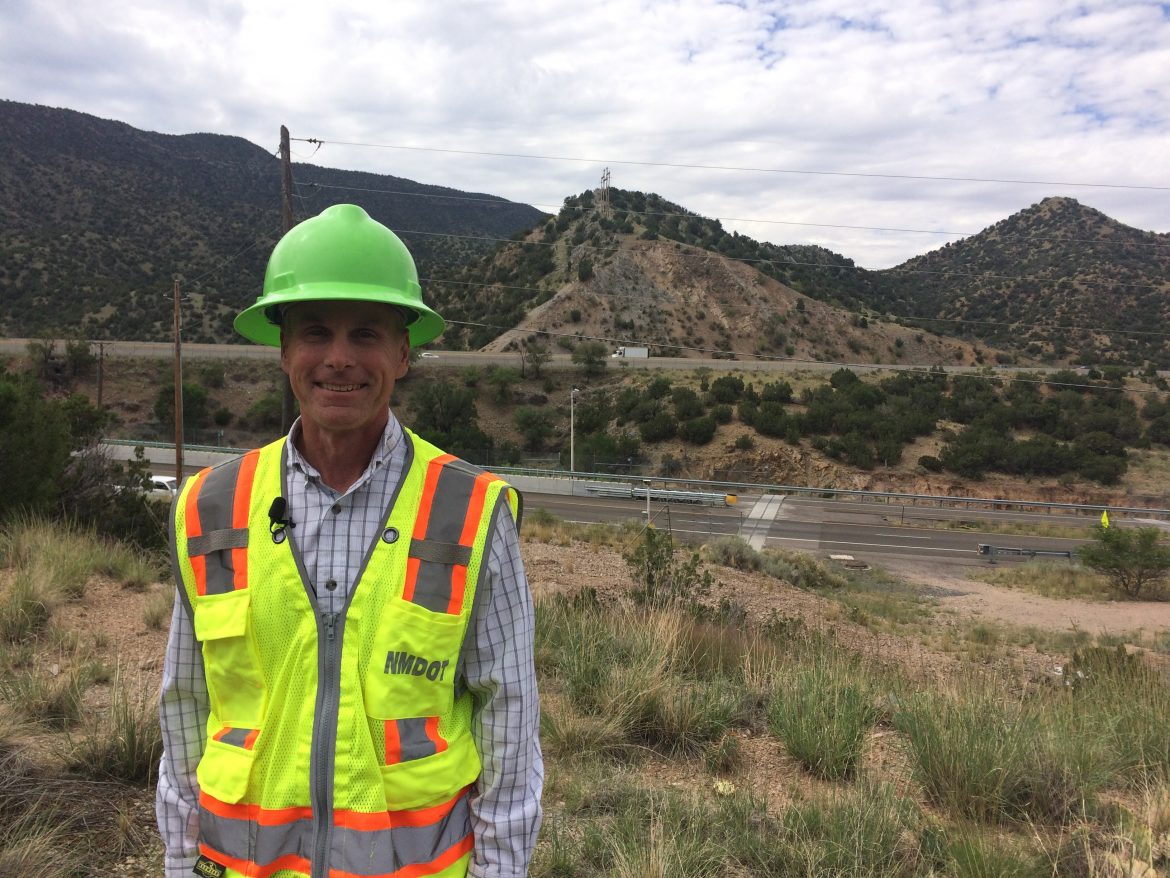 NMDOT's Jim Hirsch with NM-333, Interstate-40, and part of the Tijeras Canyon Safe Passage Project behind him

It can be scary to drive at night in rural New Mexico. There aren’t lights to see who might be on the side of the road, ready to race or saunter across. While we’re zooming along a ribbon of highway at 75 or 80 miles per hour—sometimes in a line of cars, sometimes all alone out on the highway—often, there are owls hunting, foxes looking for mice in the grassy median, coyotes bringing food home to the den, or elk on their way to water or higher ground. Even during the day, pronghorn or deer might dart across the road.

When a car collides with an animal, it’s bad news for everyone. Even near-misses, when you swerve or slam your brakes, are dangerous.

And some places are more dangerous than others.

Fifteen years ago, Wild Friends—a statewide student group organized through the University of New Mexico School of Law—lobbied the state legislature to convene a workshop to look at the problems of wildlife-driver accidents. The New Mexico Carnivore Working Group organized the Critical Mass Workshop in 2003 to look at which New Mexico highways were most dangerous for wildlife and drivers. Tijeras Canyon, where animals move back and forth between the Sandia and Manzano Mountains, ranked near the top.

Today, the Tijeras Canyon Safe Passage Project is one place where the New Mexico Department of Game and Fish and the Department of Transportation are trying to protect wildlife and keep drivers safe, too.

Jim Hirsch, an environmental scientist with NMDOT, stands atop a hill overlooking State Highway 333 and Interstate 40. The two highways pass through Tijeras Canyon, which links the Sandia and Manzano mountains. And between the two highways flows Tijeras Creek. As small as it is, it’s the only source of water for wildlife for miles.

Hirsh points to the eight-foot high fences below: tall game fences funnel animals coming down from the Sandias into just one spot across NM 333. There, their weight activates flashing lights that warn drivers to slow down. If they try to head up or down the highway, an electrified mat on the roadway delivers a slight shock.

The project was designed to get wildlife across that stretch of road and to the passage below, without getting in the way of drivers. Once they’re down in the creek bed, animals can cross below I-40 and make their way into the Manzanos, or head back to the Sandias.

“The reason we don’t just build game fence up and down the roadway is that we also want to provide crossings habitat connectivity for wildlife so that wildlife can still have access the water food and cover,” Hirsch says. “Just like humans—we use roadways to go to the supermarket—we need to allow some gaps in these game fences so that wildlife can meet their needs.”

The same places that are important to us, as travel corridors in tricky landscapes, are also critical to wildlife.

“Just like us they need they need water food and cover and so sometimes for them to acquire those resources, they have to cross our roadways,” he says. And wildlife vehicle collisions are costly and dangerous to drivers, too.

NM 333 is part of the old Route 66, built in the 1930s. Even in the road’s heyday following World War II, cars were slower and less powerful than they are today. And that added horsepower and speed causes problems, Hirsch says.

“When this roadway was first built, wildlife collisions weren’t a big concern,” he says. “The concern was just providing the public interstate transportation.”

NMDGF’s Mark Watson beneath the east-bound lanes of Interstate-40, and Tijeras Creek behind him

Beneath the eastbound lanes of I-40, Mark Watson points to animal prints in the mud of Tijeras Creek. Down here, about a half-mile downstream from the NM 333 crossing, there isn’t much water. But it’s life-sustaining for wildlife. Up above, trucks rumble and shake the overpass above.

“Habitat fragmentation and habitat loss are the two biggest causes of wildlife population declines,” says Watson, terrestrial habitat specialist with the New Mexico Department of Game and Fish. As humans chop up wildlife habitat—with roads, cities, neighborhoods, industry and other types of development—populations decline and trigger laws like the Endangered Species Act.

In particular, highways create linear barriers for wildlife movement, Watson says. “The more noise and traffic—the higher the traffic volume—the harder it is for animals to move across or even below them,” he adds. Deer and elk need large structures, like the bridge we’re standing beneath, to connect their habitat.

“The Sandia Mountains are an isolated mountain range, and it’s got development all the way around it with Albuquerque, [communities in the East Mountains], and Placitas on the north,” Watson says. “So black bears and cougars and mule deer populations are essentially isolated in the Sandias.” To maintain their populations and health, they need to mix genetically with populations from the Manzanos and even further south.

The agencies have similar projects at Raton Pass and near Cuba. And the wildlife cameras capture all sorts of species using the safe passage projects, including deer, elk, bobcats, mountain lions, coyotes, bears and raccoons. Spotting them in the photos is a sign the project is working.

Engineering projects like this one can help project both wildlife and drivers, but Watson says drivers need to pay attention.

“The only thing that really stops those accidents from occurring is when motorists slow down or are prepared to react like if they’re at a wildlife crosswalk like the one we have in Tijeras,” he said. “You need to slow down.”

NMDOT shared a number of trail camera photos from crossing projects in New Mexico, including the Tijeras Safe Passage Project and projects in Cuba and Raton Pass.