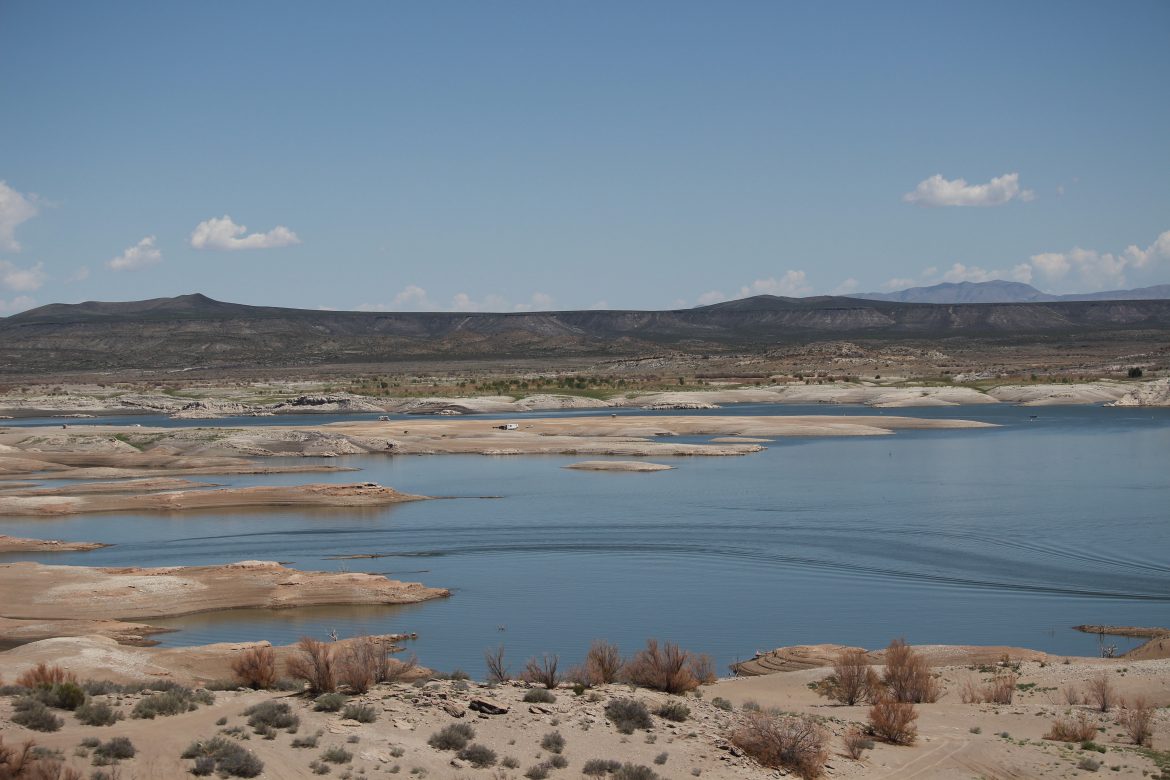 On the downstream side of Elephant Butte Dam, U.S. Bureau of Reclamation employees navigate a stairwell above the Rio Grande, passing scat from the ring-tailed cats that like to hang out here, and enter through a door into the 300-foot tall concrete dam.

Built in the early twentieth century, Elephant Butte Dam holds back water stored for farmers in southern New Mexico, the state of Texas and Mexico. At full capacity, the reservoir is about 40 miles long and can retain more than 2,000,000 acre feet of water.

Jesse Higgins, an electrician who manages the powerplant at the dam, goes first and flips on the lights, which flicker and fire up after a few minutes. Labyrinthine tunnels burrow throughout, and water drains along the sides of the narrow, elevated path. Inside, it’s easy to imagine what the world was like in 1916, when the dam was completed. The Civil War had been over for half a century—nearly comparable to the time between the Vietnam War and now—and the Mexican Revolution was ongoing. Since 1916, there have been world wars and shifting alliances, medical and technological breakthroughs. Humans have visited the moon and landed a rover on Mars. Our understanding of the Earth and humanity’s impacts upon it have changed, as well.

But during that time, comparatively little has changed when it comes to how water is managed in New Mexico. The Rio Grande Compact, which divides water among Colorado, New Mexico and Texas was signed in 1938. And New Mexico’s water laws today are still based on codes that the territorial legislature passed in 1907.

This story is the second in a three-part series about the Rio Grande, its reservoirs and the U.S. Supreme Court battle over its waters.

But as the climate changes and warmer temperatures affect the state’s rivers, reservoirs and aquifers, the same tactics and strategies that may have helped New Mexicans weather dry times over the past century won’t keep working. And perhaps no place in the state offers such a stark reminder of that fact than the reservoir behind this dam. After a dry winter and hardly any snowmelt this spring, Elephant Butte Reservoir is at three percent capacity, storing 58,906 acre feet of water as of September 24.

“Historically, people tend to listen to what they want to hear, rather than what they need to hear: What they need to hear is that our laws do not reflect hydrology and our hydrology is changing for the worse, and if we do not manage it, it will manage itself,” says Phil King, an expert on hydrology and the relationship between surface and ground water in southern New Mexico.  “I would much rather correct the system ourselves through management than let nature do it’s cold, hard reality fix,” adds King, a professor of civil engineering at New Mexico State University and a consultant to the Elephant Butte Irrigation District, or EBID.

EBID serves about 8,000 farmers in the Rincon and Mesilla valleys in southern New Mexico, from Arrey to the border town of Santa Teresa. If you’ve eaten chile from Hatch or pecans from Mesilla, fed alfalfa to your horses or poured milk from a New Mexico dairy into your coffee, you’ve consumed water that EBID’s farmers divert from the Rio Grande and Elephant Butte or pump from the aquifer.

For roughly a century, EBID farmers have supplemented irrigation water with groundwater. Without it, they would not have survived the drought of the 1950s. But they pumped during the wet years, too, including throughout the 1980s and ‘90s. Then, beginning around 2003, about four years into the Southwest’s current drought period, pumping ramped up even more.

That’s a problem, especially in the Rio Grande Valley, where river water recharges the groundwater, and pumping water from the aquifer makes it even thirstier for river water.

With both the surface water and the groundwater strained, the system suffers a double-whammy, King says. That causes a positive feedback or what King calls a “death spiral.”

Even though scientists, engineers, hydrologists and farmers know the two are intertwined within the same system, in New Mexico, groundwater and surface water are managed separately. King calls that “hydrological folly.”

“We’ve got some major rethinking to do with New Mexico water law: Status quo is not an option,” he says. “I think what people need to understand is we are facing conditions that mankind has not faced here before.”

And the only way to reverse that death spiral is to use less water.

One way to do that, King says, is to formalize a fallowing system that allows cities, factories and businesses—in Las Cruces or in burgeoning border cities like Santa Teresa—to pump groundwater if they pay southern farmers with surface water rights to fallow their fields. Another way is for farmers to reduce their irrigated acreage and grow higher-value crops.

It’s clear that any real solutions to cut water use must focus on agriculture. That’s because farms use 75 percent of the water in the Rio Grande Basin. Cities can implement conservation measures, and people can reduce their household water use, King says, but the overall savings are minimal. Even finding “new” sources of water to add to the system—like capturing stormwater runoff or desalinating brackish water—will only add only tens of thousands of acre feet, King says. That doesn’t come close to making up for the amount of water drought and climate change deplete from the system.

In King’s ideal world, water management schemes would reflect the connection between surface and ground water. And water management wouldn’t get blown off course by political winds. “I think the handling of water policy, in terms of both promulgation and implementation, needs to be de-politicized,” he says. “It needs to be based much more on science, hydrology and the hydraulics of the system, rather than on politics.”

Then, rather than each sector—agricultural, municipal and industrial—fighting over every last drop of water, solutions could emerge. And so, too, could changes that protect the river and groundwater system, the economy and people’s futures.

‘We’re going to do everything we can’

At Elephant Butte, Reclamation runs the Rio Grande Project, delivering water each year to EBID, Texas and Mexico. The agency made it through this year, getting water to downstream users, even with record-low spring runoff. Elephant Butte, and other reservoirs, did their job, spokeswoman Mary Carlson has pointed out, storing water from wetter years in the past. Meanwhile, the agency will continue refining its tools and technologies for modeling, forecasting and water delivery to figure out how to make it through next year, and the years after that.

“As you get stressed, you have to look for those outside-the-box ideas,” says Yvette Roybal McKenna, with Reclamation’s Water Management Division. “We have to find the optimum path so we can move forward and adapt.” She says she can’t accept a future where the project fails to deliver water. “We’re going to do everything we can.”

Reclamation has also been studying climate change and its effects on the Rio Grande Basin, which supplies drinking and irrigation water for more than six million people.

Between 1971 and 2001, average temperatures in the Upper Rio Grande Basin increased by an unprecedented 0.7 degree Fahrenheit per decade, or double the global average. And they’re expected to rise within the basin by an additional four to six degrees Fahrenheit by the end of the 21st century.

Those rising temperatures will cut the amount of water flowing into the system, as well as the timing of those flows, according to a 2013 report from Reclamation about the impacts of climate change on the Upper Rio Grande Basin. At the same time, more water will evaporate from reservoirs. And plants—forests and crops—will demand more water to survive. All of these factors together, according to the report, “are expected to cause significant changes in the available water supply and demand.”

A 2016 Reclamation report also notes that the rivers flows are already insufficient to meet the basin’s water demands, and the basin already experiences water supply shortages, even without the effects of climate change.

Elephant Butte is ‘out of date’

One idea to keep more water in canals and pipes, as well as in the Rio Grande itself, is to stop storing water at Elephant Butte.

“Keeping water in Elephant Butte is a practice I think is out of date, and not wise,” says Jen Pelz, an attorney for WildEarth Guardians. Located in southern New Mexico—an arid environment that keeps getting warmer—Elephant Butte Reservoir loses an enormous percentage of  water each year to evaporation.

Rates of evaporation vary depending on humidity, wind, radiation, temperature and the amount of water actually in the lake. According to a 2004 report from New Mexico State University, evaporation from Elephant Butte can be up to one-third of the average inflow each year. Between 1940 and 1999, when inflows to the lake ranged from 114,100 acre feet to more than 2.8 million acre feet per year, annual evaporation averaged about 250,000 acre feet of water.

Warming will only accelerate Elephant Butte’s evaporation rate—by another ten percent, according to Reclamation’s 2016 report.

That means it’s time to change where water is stored on the Rio Grande, says Pelz.

WildEarth Guardians wants the National Academies of Sciences to evaluate existing reservoirs in the basin and run models of how the system would function if water were stored in different places, such as in upstream reservoirs with lower evaporative losses.

Storing Rio Grande Project water—the water in Elephant Butte that Reclamation has to deliver to EBID, Texas and Mexico—in higher-altitude reservoirs would could save between 40,000 and 85,000 acre feet a year from evaporating, according a report from WildEarth Guardians called “Rethinking the Rio.”

Changing where water is stored would mean renegotiating parts of the Rio Grande Compact of 1938. And since federal laws passed during the twentieth century lay out the rules for reservoir operations and water storage, Congress would need to take action.

“People have been talking about reservoir re-operation for a long time, but no one talks about how you do it,” she says. “You have to deal with the compact, deal with the reservoir reauthorizations, deal with accountability along the river.” If water were stored higher in the system, for example, downstream users would need to know their upstream neighbors weren’t diverting their water unfairly.

Making these monumental changes demands building trust and relationships within the watershed, says Pelz. But New Mexico’s vulnerability to climate change—revealed so clearly this year—should motivate everyone to start doing things differently.

“For the middle valley and in the south, [managers] delivered all the water for irrigation this year,” Pelz says, “And if the reservoirs can’t be filled up over the winter, there will be no water for next year.”

That’s a crisis, Pelz says, for the Rio Grande and for the people who depend upon it.

“Taking concrete steps to do something different means sacrifice: The reality in New Mexico is there are going to be sacrifices, areas that get dried up, and people have to change the way they make a living,” she says. “That’s the reality of the climate-changed world we live in.”

This story is the second of a three-part series about the Rio Grande, its reservoirs and the U.S. Supreme Court battle over its waters. Read Part 1 here. You can also read all of our past coverage of the Rio Grande and the Texas v. New Mexico & Colorado litigation.