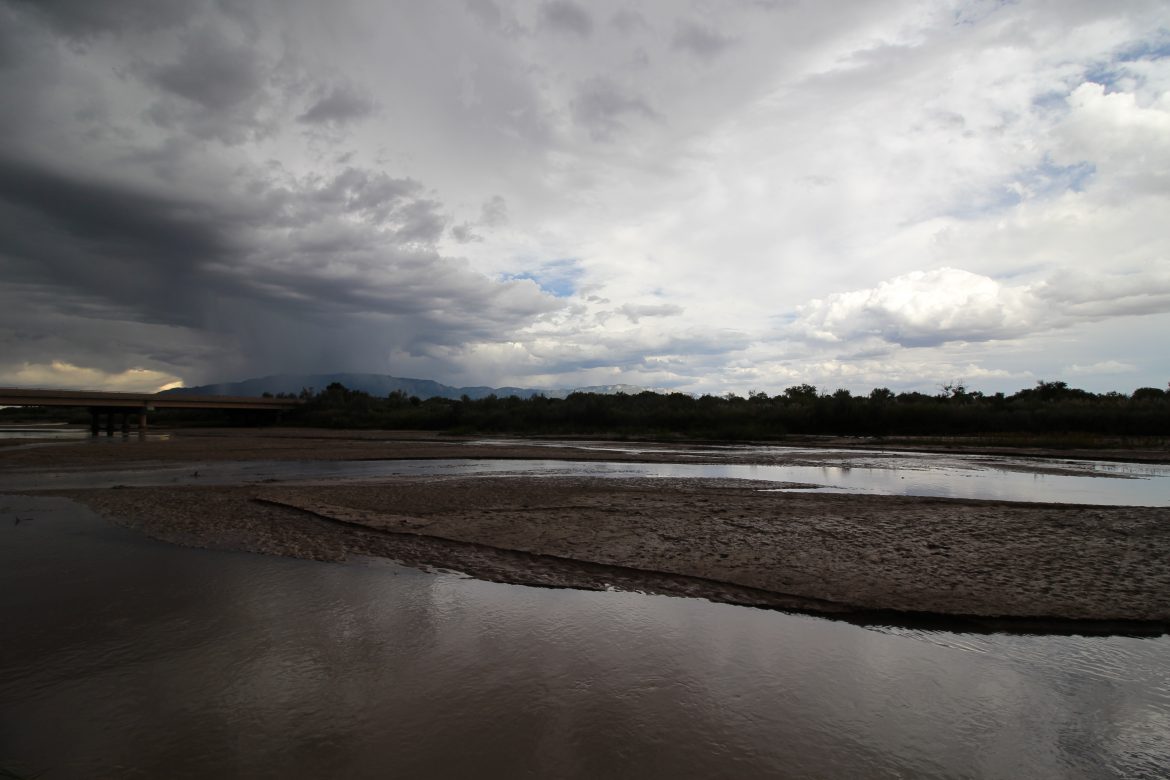 A storm brews near the Rio Grande in Albuquerque

Last winter, snows didn’t come to the mountains, and the headwaters of the Rio Grande suffered from drought. In April, the river—New Mexico’s largest—was already drying south of Socorro. And over the summer, reservoir levels plummeted.

Meanwhile, the U.S. Supreme Court battle between Texas, New Mexico and the U.S. government over the waters of the Rio Grande marches onward. At a meeting at the end of August, the special master assigned to the case by the Supreme Court set some new deadlines: The discovery period will close in the summer of 2020 and the case will go to trial no later than that fall.

This story is the third in a three-part series about the Rio Grande, its reservoirs and the U.S. Supreme Court battle over its waters.

If New Mexico loses the case, Texas could seek damages of up to $1 billion, compensation for the more-than three million acre feet of water the state says it should have received over the course of more than a half-century. Not only that, but New Mexico could be forced to curtail groundwater pumping throughout the Rincon and Mesilla valleys, the hundred-mile stretch from below Elephant Butte to the United States-Mexico border.

Looking at Elephant Butte Reservoir right now, which is only three percent full as of Sept. 26, it’s easy to think that New Mexico doesn’t have any water to send downstream. But it’s the water below-ground that has been a point of contention between the two states. And the disagreements span decades.

Texas has long-complained that by allowing farmers to drill wells alongside the Rio Grande, New Mexico has siphoned off water that is hydrologically connected to the river, and should be flowing downstream to Texas under the Rio Grande Compact of 1938.

Then, more than a decade ago, drought motivated farmers in southern New Mexico and west Texas to talk about doing things differently. With the wet years of the 1980s and ‘90s in the rearview mirror, they watched levels drop in Elephant Butte and Caballo reservoirs and talked about new ways to share water. In the end, Texas agreed to back off complaints about New Mexico’s groundwater pumping, and New Mexico farmers agreed to share surface waters during dry times. In 2008, Elephant Butte Irrigation District (EBID) and El Paso County Water Improvement District No. 1 (El Paso No. 1) signed a new agreement with the U.S. Bureau of Reclamation. That’s the federal agency that operates the Rio Grande Project and is responsible for storing water at Elephant Butte and Caballo for EBID, Texas and Mexico.

But the states hadn’t agreed to the new water sharing plan, and in 2011, then-New Mexico Attorney General Gary King sued Reclamation, saying the new plan sent too much water to Texas.

In 2013, Texas took the issue to the U.S. Supreme Court. It sued New Mexico and Colorado, alleging that New Mexico failed for decades to comply with the Rio Grande Compact by not regulating groundwater pumping. Earlier this year, New Mexico was dealt another blow when the Supreme Court allowed the U.S. government to intervene in the case. According to the federal government, New Mexico has harmed its ability to deliver water under the compact and under the international treaty with Mexico.

Read Part 1: NM’s reservoirs weathered this year. But what will happen next year?

“We may be in a water drought, but the litigation is flowing down here,” says Gary Esslinger, manager of EBID, who says he tries to keep a sense of humor through the litigation and the drought. EBID has roughly 8,000 farmers and includes about 90,000 acres of irrigable lands, though this year’s low water conditions meant only about 75,000 acres were planted.

“Elephant Butte sits in geographic New Mexico, so you would think Santa Fe would be protecting us, but when it comes to water accounting and federal accounting of water through the three states, we’re in Texas,” Esslinger says.

That’s because under the Rio Grande Compact, New Mexico doesn’t deliver water across the state line, but to Elephant Butte Reservoir about 100 miles north of Texas. From there, Reclamation delivers Rio Grande Project water to southern New Mexico, Texas and Mexico.

When the case ended up in the Supreme Court, EBID tried to intervene and become a party to the case. As Esslinger explains, the irrigation district is in a sort of limbo: it’s in geographic New Mexico but “compact Texas.”

The Supreme Court denied that intervention, but the irrigation district did file an amicus, or friend of the court, brief. And recently, the new special master on the case, Judge Michael Melloy, granted both EBID and El Paso No. 1 an “enhanced level of participation,” says EBID’s attorney, Samantha Barncastle. That status allows the districts to take part in the ongoing discovery and deposition processes.

Still frustrated that it’s on the fringes of the legal dispute, even though it could affect their farmers so intimately, the district is increasingly focused on how agriculture can survive into the future, given constraints on surface waters, due to drought and warming.

“We’re not going to have the surface water we had in the ‘80s and ‘90s, so as an irrigation district we need to find out a way to survive to benefit the economy in southern New Mexico,” she says. “It’s nice to rely on the surface water, but it’s not materializing every year like it used to, or it’s different than it used to be,” she says. Sometimes precipitation comes later in the year, as rain instead of snow, or it falls below the reservoir and can’t be captured for storage.

“At this point, everybody needs to understand it’s absolutely necessary to rely on the groundwater, but we have to do that in a responsible way,” Barncastle says. “What EBID would like to see happen is [to have] responsible limits on how groundwater can be used.”

EBID’s farmers are looking for solutions, she says, not litigation. And all the water users need to figure out what it means to have a resilient aquifer in southern New Mexico. Municipal and industrial water users rely on groundwater, too, she points out. And if groundwater is the “savings account”—the water people draw upon when surface water isn’t available—everyone needs to know their spending limits.

“We’re looking at, how do we make sure this area survives into the future, assuming we aren’t always going to have the surface water available,” says Barncastle. “Something’s got to give, so what are the give points and who is going to participate? Our position is it’s not just the farmers that should be cutting back and getting responsible about water use—it’s everybody.”

Today, the state of New Mexico continues to defend itself against the claims from Texas—and now, also from the United States. In May, it also filed its own complaints against the other two parties.

Among other counterclaims, New Mexico now says Texas pumps groundwater to the detriment of surface flows, and the United States acted outside its authority over the Rio Grande Project when it signed onto the 2008 Operating Agreement with EBID and the west Texas irrigation district.

Moreover, New Mexico says that through the renegotiated operating agreement and groundwater pumping, the U.S. and Texas have both reduced New Mexico’s water supplies and “deprived New Mexico of the equities and protections it bargained for when it entered into the [Rio Grande] Compact.”

In front of the Supreme Court, and in meetings with the special master, the state is represented by a contract attorney, Marcus Rael, Jr., from New Mexico Attorney General Hector Balderas’ former law firm, Robles, Rael & Anaya. That firm is assisted by the law firm Trout Raley, which is based in Denver.

Deputy Attorney General Tania Maestas spoke with NM Political Report about the litigation’s progress as the state prepares for discovery, works with its witnesses and coordinates with the New Mexico Interstate Stream Commission and private contractors on hydrological modeling of the lower Rio Grande.

Maestas explains that each of the parties has until Feb. 1 to submit expert reports concerning the relationship between surface and groundwater in the Lower Rio Grande and the amount of water New Mexico has delivered downstream. In addition to studying historic conditions, experts are looking at what she called “significant changes” in the area, including those related to drought and climate change, since EBID, El Paso No. 1 and Reclamation signed the 2008 Operating Agreement. “We’re really looking forward to revealing through our expert reports all the changes that make the 2008 Operating Agreement inadequate,” she says.

It’s unfortunate that EBID filed an amicus brief siding with the position of Texas, but Maestas says the Office of the Attorney General does not see EBID as its enemy.

“The way Attorney General Balderas looks at this is we are all New Mexicans and we are all looking for a way to secure a more sustainable water future,” she says. “We hope that ultimately, we are able to resolve this case amicably and with input from all of our lower Rio Grande partners, including EBID.”

After five years of hammering out details—like who the parties are and rejecting an earlier motion by New Mexico to dismiss the case—the court is going to start getting down to the real issues soon.

“We are coming out swinging,” she says. “Although we are forced to defend this case”—which was filed before Balderas was elected Attorney General—”there are a number of facts and issues that will come out with this litigation that show the U.S. and Texas do not have clean hands.”

This story is the second of a three-part series about the Rio Grande, its reservoirs and the U.S. Supreme Court battle over its waters. Read Part 1 and Part 2. You can also read all of our past coverage of the Rio Grande and the Texas v. New Mexico & Colorado litigation.