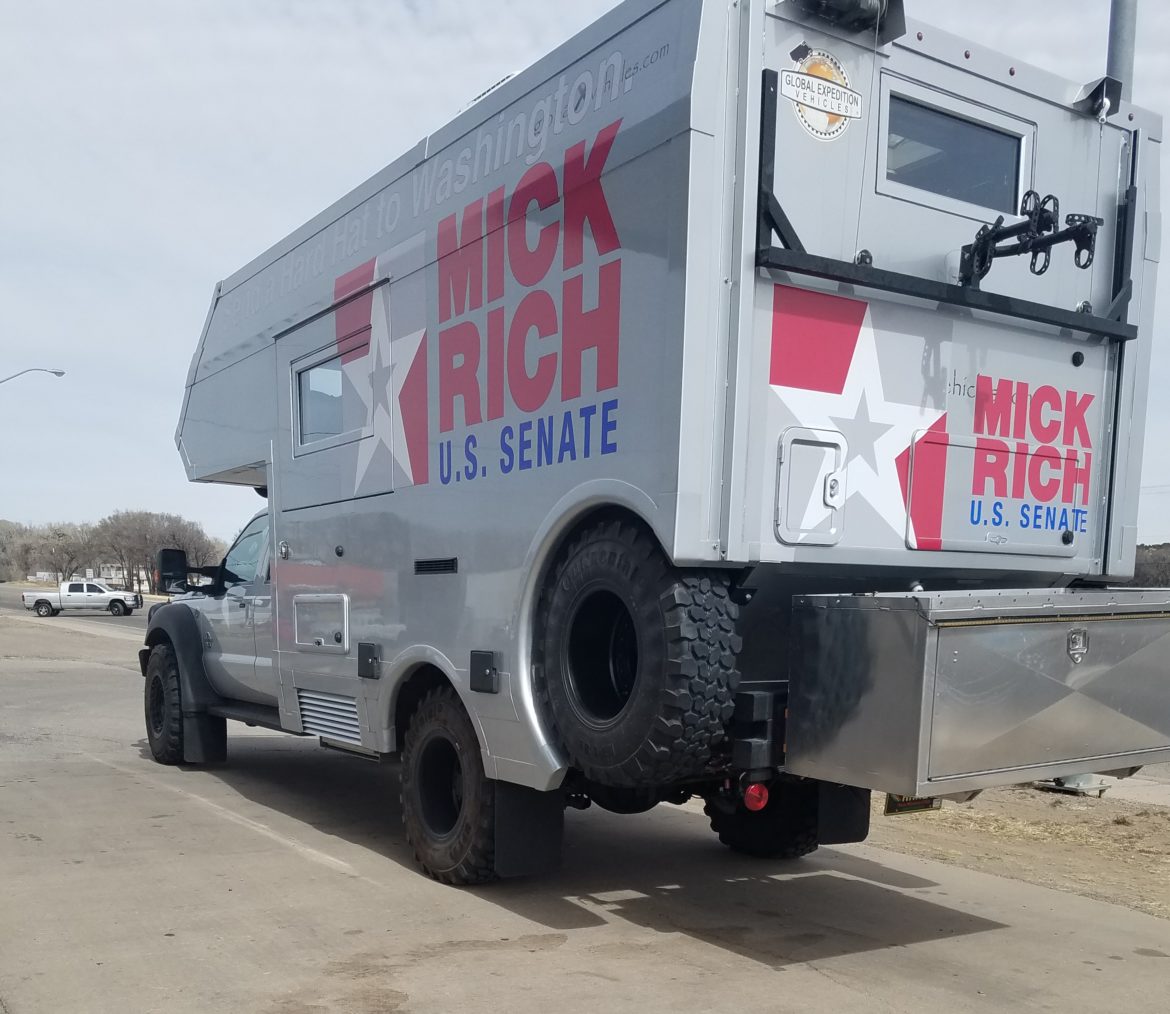 Mick Rich’s slogan for his U.S. Senate campaign is “Send a hard hat to Washington.” Like many candidates, Rich promotes his day job and business skills to show he’s the best choice to represent New Mexicans in the U.S. Senate. His background in major construction projects and his support for the military and national laboratories, Rich has said, qualifies him to represent the state.

But records from the New Mexico Military Institute (NMMI) show friction between Rich’s contracting company and school officials over a project that should have been finished last year, but still has pending work to be done.

When NM Political Report first asked about the contentious emails and letters, a school official downplayed the delayed project. Rich, however, blamed poor planning from the project’s architect, engineer and school officials for the delay.

A year behind schedule

In December of 2016, a month after President Donald Trump won the election and several months before the 64-year old Rich announced plans to run against incumbent U.S. Sen. Martin Heinrich, NMMI awarded Mick Rich Contractors a $3.1 million contract to renovate the historic Marshall Hall, which houses the campus police department and infirmary. Built in 1920, Marshall was set for its first major overhaul in almost 100 years, according to the school. NMMI is a military preparatory school that also houses students, whose ages range from 14 to 22.

Funding for the renovation mostly came from a general obligation bond approved by local voters, and the project was scheduled to be completed by October 2017.

Four months after the job was scheduled to be  done, NMMI issued a letter requesting a meeting with Rich and notifying Mick Rich Contractors that the school was considering terminating the contract and finishing the job themselves.

“Due to the continued unsatisfactory corrective action of our reported service failures, NMMI is considering terminating the Agreement for cause,” wrote NMMI Chief Financial Officer Scharmer.

According to detailed records from NMMI the school and Mick Rich Contractors agreed during the meeting that the project would be completed by March 2018 and work continued under the original contract.

But the firm missed that deadline, too.

In April, the school notified the project’s bonding company, which essentially insured the project, that NMMI was on the verge of claiming “Contractor Default.” For a second time, NMMI and Mick Rich Contractors agreed to a new deadline, this time in June 2018.

This deadline came and went, though NMMI was able to partially occupy the space by July 2018 to start preparing for the new school year.

In August, 10 months after the original deadline, the surety company that issued the bond for the project asked for an update. In response, NMMI issued a letter outlining what officials saw as months of missed deadlines. The school, for the third time, said Mick Rich Contractors had missed an agreed upon deadline and was in default.

NM Political Report reviewed hundreds of pages of emails, contract documents and meeting notes related to the Marshall Hall project. Those records detailed the numerous meetings and emails regarding a project that is currently a year past the original completion date.

In at least one instance Mick Rich Contractors’ project manager claimed the company had already asked for more time, a request she said, the school did not honor.

When additional work is requested or a contractor needs more time to finish a project it is common practice in the construction industry to use change orders to document deviations from the original plan.

In an email to the school’s facility manager, NMMI Chief of Staff Col. David West disputed the project manager’s claim.

“I’m sure she / they will be able to provide proof of the written request for additional time on all 30 [change orders] and the written denial by NMMI(sarcasm),” West wrote, with his own emphasis.

In an initial interview with NM Political Report, West downplayed the delayed contract and said it wasn’t unheard of for projects to take longer than planned.

But when asked about the numerous missed deadlines and letters suggesting his company had defaulted, Rich took a different tone.

“What a stinkin’ mess that job was,” Rich said.

He had choice words for both the project engineer and architect.

“They screwed it up, they put it in our goddamn lap,” Rich told NM Political Report. “I’m really hot over this one.”

He cited more than 70 separate, unforeseen problems his team came across that he said could have been avoided if the project’s architect and school officials had done their due diligence.

“I had multiple conversations down there, and I had a conversation with the general,” Rich said. “I told him, ‘The architect did a God-awful job. The engineer was even worse. Your team didn’t do an adequate job before we got to the project.’”

But, Rich said, he was willing to take on some of the responsibility.

“My team screwed up, we should have made it very clear from day one that we wanted time extensions for all the delays,” Rich said.

Still, Rich insists that thanks to poor planning and project sketches, his workers were unaware of certain problems like walls that were supposed to be demolished but were actually integral to the building’s structure.

The architecture firm for the project declined to comment for this story.

Rich’s assertions are backed by a September 2018 letter he sent to the school, contesting the claim that his company defaulted.

“There are 73 documented unforeseen site conditions, which generated 63 change orders for additional work requested by the Architect, but no time extensions were acknowledged,” the letter from Mick Rich Contractors read. “MRC proceeded with work to ensure that the construction progress was not stopped.”

After NM Political Report spoke with Rich about the letters of possible default, his company sent another, more pointed letter to NMMI officials.

“MRC received a copy of [NMMI Director of Facilities] Kent Taylor’s letter to the Western Surety Company regarding the above-referenced project from a third party, and we take exceptions to the statements within,” the new letter read.

The letter also accused an unknown “someone” at NMMI of “turning this issue into a political football.”

But West refuted the claim that NMMI would drag the issue into the political sphere.

“We’re not into the politics,” West said. “Frankly we work for all sides and we’re a state entity.”

Further, West said, Rich’s claims in his letters are based on Rich’s own opinion.

“We developed a letter that we believe is based on facts and not the rancor of the letter that he sent to us,” West said. “He’s certainly welcome to his opinion, but we stand by our letter.”

West, who would not speak on behalf of the project architect, hinted that Rich’s claims that project drawings and planning were partially to blame for the delayed project, is not based in fact either.

“Unfortunately, I think that’s his claim,” West said. “I recognize his claim, but it doesn’t mean we agree with it.”

But delays and default letters aside, the project started off with a $3.1 million price tag and as the end nears, the final cost is $3.4 million, meaning the cost increased by about seven percent. And Mick Rich Contractors is still on the job, which the school estimates has about $65,000 worth of work remaining, or about one percent of the original cost.

West told NM Political Report the school will likely take over the finishing touches, or about $10,000 worth of work.