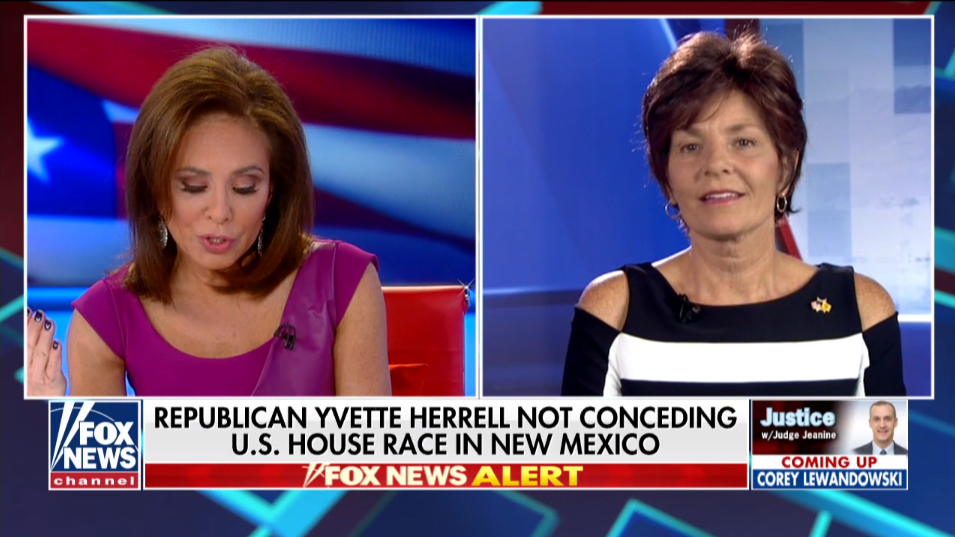 And after narrowly losing the congressional race to Democrat Xochitl Torres Small in Tuesday’s election, Herrell showed up on President Donald Trump’s favorite TV network Saturday. The state legislator told a Fox News host that  she isn’t conceding to Torres Small, and she questioned the counting of absentee ballots that provided the final margin of victory for her opponent.

Herrell spoke on “Justice with Judge Jeanine,” a program Trump himself appeared on before.

According to Herrell, an hour after some media outlets called the race and she gave her victory speech, the Secretary of State’s office called and said, “They had magically found 4,000 ballots that had not been counted.” She said about an hour and a half later, the office said there were an additional 4,000 ballots.

The Secretary of State’s office said the election was fiar.

“Doña Ana County voters can have every confidence that their votes were counted properly and in accordance with the law and any suggestion that absentee ballots were somehow ‘magically found’ on election night is simply false,” spokesman Alex Curtas said in a statement.

“I think that maybe we need to look into it a little bit more,” Herrell said of the ballots that they finished counting the night after the election.

When asked what she would do, she did not provide any specifics, but said “this is about voter integrity and restoring voter confidence.”

“We need to look into it, shine some light on it and make sure if there’s problems, let’s fix them,” she said.

The Albuquerque Journal’s political consultant Brian Sanderoff explained his mistake when he called the race Tuesday in an interview with the Santa Fe Reporter last week.

“If I knew those early and absentee votes were not in the mix, I would have known Xochitl was going to win,” Sanderoff told the alt-weekly.

Some outlets, like the Associated Press and New York Times,  did not call the race Tuesday night.

Herrell’s appearance on the program echoed Trump’s narrative on close U.S. Senate races in Florida and Arizona. The Florida race is going to a recount, while officials in Arizona continue to count hundreds of thousands of votes.

The program’s host, Jeanine Pirro, incorrectly said the district has been held by a Republican for the last 16 years (a Democrat held the seat from 2009-2010) and was unable to pronounce Torres Small’s first name (Herrell replied, “That’s pretty close” when Pirro asked if her mangled  pronunciation was correct). Herrell corrected Pirro when the host asked about the county commissioner in charge—it is the county clerk who counts ballots.

All election results are still unofficial until the state canvass takes place later this month.

And even if a media outlet calls the race or a candidate declares victory, that does not mean the results are official.