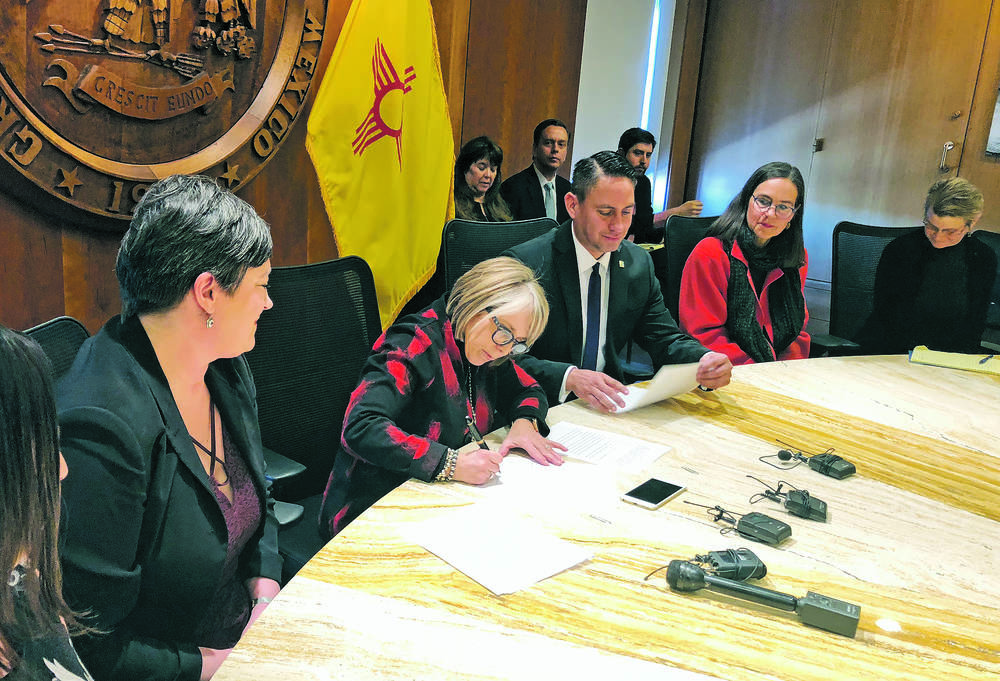 Gov. Michelle Grisham Lujan signs the first executive order of her term Jan. 3, effectively doing away with the state Public Education Department's use of the unpopular statewide math and reading tests called PARCC. Under a new Democratic administration, teachers unions could see more support for their proposals during a legislative session that is likely to center on the state's public education system.

When Michelle Lujan Grisham announced after the election she was building a transition team to help gather data and create strategies for reforming the state’s public education system, it was perhaps no surprise that five of the roughly 30 members of the group represented teachers unions.

That didn’t come as much of a surprise to many observers: Teachers unions have aligned themselves with Democratic Party candidates and leaders for many years, and had endorsed Lujan Grisham in the 2018 election — just as they had backed Democrat Gary King in 2014 against then-Gov. Susana Martinez.

Now, as Lujan Grisham embarks on a 60-day legislative session in which the future of New Mexico’s educational system will be a central topic, the power of the unions will be a looming question. Will their power be on full display in 2019 and beyond, or are they simply moving back into the picture after eight years of often-bitter battles with the Martinez administration?

Several Republican legislators say they expect the unions will have undeniable influence, particularly when it comes to pushing for higher teacher pay and changes in the state’s teacher evaluation system, which has relied heavily on student test scores to measure a teacher’s effectiveness.

Others say there will be little change — other than the lack of a union clash with the Martinez administration. The state’s three main teachers unions — the National Education Association, the American Federation of Teachers and the Albuquerque Teachers Federation — found their objectives in almost-reflexive conflict with those of Martinez and her longtime secretary of education, Hanna Skandera.

In the spring of 2017, Skandera blamed the state’s teachers unions for “keeping us where we are” as she discussed New Mexico’s lagging performance in K-12 education.

“They still have quite a loud voice,” Skandera said, “and if you’re not vigilant, they do continually take ground.”

For their part, the unions were consistent in their rejection of Martinez, opposing Skandera’s nomination and often — though not always — pushing back against her initiatives, including a teacher evaluation plan, the state’s A-F school grading system and efforts to hold back third-graders who could not read to grade level.

“I think there is going to be a feeling that they have more influence,” he said, “because they were pushed away in the past.”

Stephanie Ly, head of the American Federation of Teachers in New Mexico, who served on the governor’s transition team along with her union colleague, John Dyrcz, agreed. She said unions have a better chance of working with state legislators and the governor to enact change because they are not being kept at arm’s length.

Charles Bowyer, executive director of the National Education Association of New Mexico, who also sat on the transition team, said the majority of the people in that group were educators, administrators, political figures and nonprofit leaders — not union reps.

He dismissed the notion union leaders had an inside track with a new administration, adding that he had no more of a say in what the transition team recommended to the governor than any of the other members of the transition team. And he doesn’t expect any extra sway during the legislative session.

“I think any change we see is built more around the platform that the governor chooses to make, more so than the fact that we are unions involved in that change,” he said. “Obviously, unions do a lot of work for the Democratic Party, and we recommended and support the governor. But it’s not that we have undue influence with her because we are unions.”

Among other proposals this year, the unions are pushing legislators to support higher teacher pay, initiatives to get more college students enrolled in teacher-preparation programs, expanded prekindergarten programs, and extra counselors, social workers and nurses to help support the mental, emotional and behavioral health needs of students.

But Ellen Bernstein, head of the Albuquerque Teachers Federation, said union leaders want much more for both the state and its educators.

“We would like to be respected for what we know about public education, about teaching and learning, about what it takes to do all of that well,” she said. “We want to be listened to and considered with respect, and I think that’s what can happen now.”