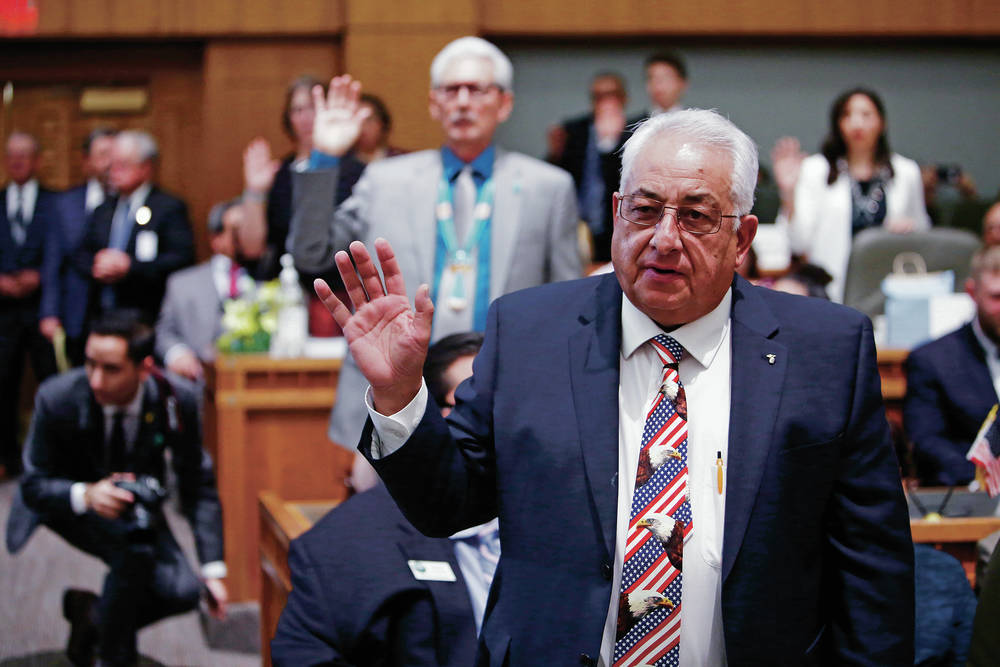 Roberto "Bobby" J. Gonzales, D-Ranchos De Taos, takes the oath of office in the House chambers on the first day of the 54th New Mexico legislative session on Tuesday, January 15, 2019.

Rep. Roberto “Bobby” Gonzales has been in the state House of Representatives for nearly 25 years. Plenty of colleagues have come and gone. And he’s noticed something about many of those who can afford to stick around in nonsalaried jobs as state legislators.

“You have to be wealthy, retired or have a very supportive employer,” says the Democrat from Ranchos de Taos.

New Mexico is one of only a few states that do not pay lawmakers an annual salary. Instead, legislators get a $161 stipend each day they are at the Capitol or attending committee meetings.

The consequence, Gonzales argues, is that many — particularly young professionals and parents with young children — simply cannot afford to sit in the Legislature.

“That limits individuals with great potential who could be here,” Gonzales says.

With that in mind, the longtime legislator wants to send voters a constitutional amendment that would create a commission to set a salary for lawmakers.

With 112 legislators, paying each a salary likely would cost millions. And it would mark an official end to the sort of part-time citizen Legislature envisioned by the drafters of the state Constitution more than a century ago.

For some, it may well amount to a needless expansion of government. For others, though, it would represent a step toward a more professional and perhaps more diverse government.

The idea is far from new, but voters repeatedly have rejected proposals to pay more money to legislators. Several proposed amendments since the 1940s would have set a specific salary for lawmakers.

New Mexico has long held to the idea of a citizen Legislature. And in turn, lawmakers usually have full-time jobs aside from their work at the Capitol. Some are teachers and farmers, but many others are people who have a better chance to control their own schedules and whose jobs pay better: often, lawyers and retirees.

Plenty of legislators also argue their duties can be a full-time job. There are the annual sessions, which last 30 to 60 days. Committees meet year-round. Meanwhile, constituents can be in constant contact on everything from problems at the drivers license office to getting funding for a local water system.

All those obligations can rule out professionals or parents who cannot take the time off.

“I’m taking a lot of time away from my job. I’m taking a pay cut,” said Rep. Angelica Rubio, a Democrat from Las Cruces who works as executive director of a nonprofit advocacy group and is co-sponsoring the constitutional amendment. “I don’t come from money. I’m not retired. But I have a very supportive employer.”

Meanwhile, good government advocates argue that an unpaid Legislature can be too reliant on committee staff and on lobbyists who often have a hand in crafting laws.

Still, a 2007 report noted that lawmakers and others involved in the legislative process were divided on the question of creating a salaried Legislature.

Some respondents argued that increasing compensation may allow for a broader cross section of the population to serve at the Capitol. Others felt it would not be necessary given the concept of a citizen Legislature in which members have careers beyond their political work.

Pay varies in legislatures across the country.

On the high end, California’s full-time legislators were paid $107,241 as of last year, according to the National Conference of State Legislatures.

Colorado, where regular sessions last 120 days, pays $30,000 a year and Arizona pays a couple thousand dollars a month. Both states also pay a per diem that varies based on how far lawmakers lives from their respective capitals.

The amendment Gonzales and Rubio are sponsoring would not set a salary for lawmakers but instead create a commission to set a rate of pay for legislators. The governor and chief justice of the state Supreme Court would each appoint two members to the commission from different political parties. The speaker of the state House and president pro tempore of the state Senate would get to appoint a member each, also. None of them could be serving legislators, family members, government employees or current or former lobbyists.

Not only would the commission set pay for legislators, it would also set pay for the governor, all statewide elected officials, members of the Public Regulation Commission as well as judges on the Supreme Court, Court of Appeals and district courts.

The House and Senate would have to approve the proposal, House Resolution 5, before it goes to voters. And if they approve it, the commission would not be established until 2023.