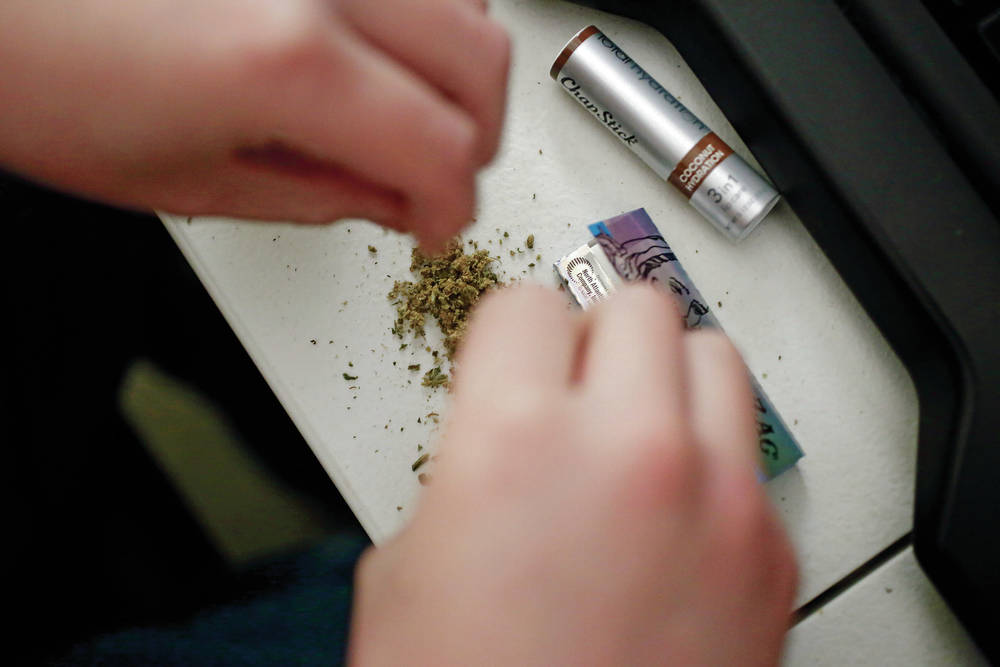 A Santa Fe man rolls a joint Thursday at his home. Will this be the year New Mexico legalizes marijuana for adult recreational purposes? The conventional wisdom is no. But with a bigger number of Democrats in the House and polls showing majority support for the plan, it could be too close to call.

After years of efforts by drug-law reform advocates, could this be the year that New Mexico legalizes marijuana?

There’s little doubt that the state is closer now than ever, with Republican Gov. Susana Martinez — an unyielding opponent of marijuana for recreational use — out of the picture and new Democratic Gov. Michelle Lujan Grisham on the record saying she’d sign a legalization bill as long as it had proper safeguards.

But few, if indeed any, people at the Capitol are predicting House Bill 356, introduced last week by Rep. Javier Martinez, will make it out of the Legislature this year.

“It’s time to be smart about the war on drugs,” Rep. Martinez, D-Albuquerque, said in a recent interview, calling the state and federal governments’ decade-sold anti-marijuana policy a failure.

If the bill passes the Legislature and Gov. Michelle Lujan Grisham signs it into law, possession of up to 2 ounces of marijuana would be legal for those over 21. The state would issue licenses to retail cannabis stores.

A 9 percent surcharge would be imposed on sales, the proceeds of which would go toward research and education as well as community grants for workforce training, substance misuse treatment, mental health treatment, and youth drug-education and prevention programs.

Cities and counties would be allowed to opt out of allowing retail sales of the drug.

“Secondly, the country is moving in this direction,” Martinez said. “I think it would be good to be among the first.”

So far, 10 states and Washington, D.C., have legalized the drug for adult recreational use. Another 23 states — including New Mexico — have medical marijuana programs.

Martinez said legalizing cannabis for those over 21 definitely would bring in new revenue for the state — he estimates between $20 million and $40 million. Other advocates have given estimates as high as $400 million.

But, Martinez said, he’s not emphasizing the new funding stream and wants to steer clear of overestimating the financial benefits of legalization.

“That’s not one of my main arguments,” he said. “I know it won’t solve all our problems in the state.”

Martinez said he’s optimistic about his bill this year, partly because of presentations on the issue last year by the interim legislative Revenue Stabilization and Tax Policy Committee, which he said generated intelligent and substantive discussion — as opposed to the emotional and often overheated conversations that often come out of marijuana debates.

The conventional Roundhouse wisdom is that a legalization measure has a good chance of passing the House of Representatives. But any such bill is likely to get hung up in the Senate, where Republicans and several conservative Democrats repeatedly have voted against efforts in the past.

But senators on both sides admit to having conflicting thoughts about the issue.

“But before I vote for it, the sponsors are going to have to prove to me that marijuana is not a gateway drug,” he said. Padilla explained that he lost a brother to a heroin overdose.

“He smoked marijuana before he got into heroin,” Padilla said of his brother. “He did have a lot of other issues, but I just want to be sure.”

An unscientific poll of constituents showed people in and near his district were “very favorable” to the idea of making marijuana legal, he said.

Republican Sen. Craig Brandt of Rio Rancho said he’s never used any illegal drug in his life, and he can’t stand marijuana. “The smell is atrocious,” he said in an interview Friday.

But, he said, “I’ve always been willing to listen and consider it, because I think it’s coming anyway.”

If marijuana does become legal, Brandt said, he believes the minimum age to buy or possess it should be 25 instead of 21, the legal age under Martinez’s bill.

Ideally, he added, the minimum age to buy alcohol also would be 25 — when the human brain is fully developed — but it’s too late for that. Legalizing marijuana would be “something new we are doing,” he said, “so we could do it right.”

Sen. Joe Cervantes, a Las Cruces Democrat, has introduced legislation in the current session and in the past that would reduce penalties for possession of marijuana. He’s hardly a Reefer Madness-type drug warrior. But Cervantes remains opposed to legalizing marijuana for recreational use and believes plenty of other senators are skeptical as well.

“I see opposition to legalization is growing,” Cervantes said, noting that Lujan Grisham didn’t mention the issue in her State of the State speech earlier this month.

A spokeswoman for the governor said last week that Lujan Grisham will study HB 356 to be sure it includes the safeguards she wants. “She just wants to be cautious,” Claudia Tristán said.

Even before Martinez’s bill was introduced, some in state government were preparing for possible legalization.

The Regulation and Licensing Department’s Alcohol and Gaming Division in December created a PowerPoint presentation for Lujan Grisham’s transition team citing technical matters that would need to be considered for the state to implement legalization.

Among the issues were possible joint-powers agreements among several state and federal agencies, and classes of licenses that would have to be issued to those involved in the industry — cannabis producer, cannabis manufacturer, cannabis retailer.

Even store employees, including clerks and security guards, would need licenses.

Polls on cannabis legalization across the nation have shown the issue has lopsided support. The same is true in New Mexico.

A September 2018 survey of likely voters conducted by Albuquerque-based Research & Polling Inc. for the Albuquerque Journal found that 60 percent of New Mexicans polled favored legalization while 32 percent were opposed.

But politicians around the country generally have refused to vote in favor of legalization. Of the states that have made marijuana legal, all but one did so through public referendums, as opposed to the legislative process.

The sole exception is Vermont, where Republican Gov. Phil Scott signed a bill last year allowing people to possess up to an ounce of pot and to cultivate six marijuana plants. The state had “decriminalized” the drug, lessening criminal penalties for possession, five years earlier.

Like New Mexico, Vermont has no way for voters to change laws through ballot referendums.

But one thing the Vermont bill didn’t do was to establish a system allowing for retail marijuana sales. The bill also doesn’t allow the state to tax and regulate sales of the drug.

“The legislation ended up being pretty cautious,” said April McCollum, a political reporter for the Burlington Free Press. “There’s no way to legally buy marijuana in Vermont other than as a medical marijuana patient.”

There is a bill in the current session of the Vermont Legislature that would set up a commercial cannabis market and allow the state to tax and regulate sales. Scott’s own Marijuana Commission last month recommended the state go this route — although the governor remains opposed to allowing retail sales.

McCollum said it’s far from certain that the bill will pass or whether there would be enough votes to override a veto.

There was pressure to legalize marijuana in Vermont, McCollum said, because neighboring New England states like Massachusetts and Maine legalized it, and so did Canada.

Similarly, the push for legalizing cannabis in New Mexico became far more serious after Colorado took that step following the success of a legalization referendum in 2012.

The law enforcement community is usually a large source of opposition to liberalizing drug laws. But local officials seem to be taking a wait-and-see attitude toward the pending legislation.

Still, the sheriff said he is concerned about legalization increasing the number of intoxicated drivers on the road. “Right now,” he said, “there is no device that can detect levels of THC in a driver.”

City of Santa Fe police Chief Andrew Padilla said through a spokesman that the agency is not going to give an opinion on possible legalization of the drug. “We will follow the laws and ordinances of the state of New Mexico and the city of Santa Fe,” he said.

Padilla might feel constrained about making public statements on the issue because his boss, Mayor Alan Webber, last year called on the Legislature to pass a marijuana legalization bill. And in December, the City Council voted 6-1 for a resolution in favor of legalization in the state.

Henry Valdez, a former state district attorney in Santa Fe and director of the New Mexico District Attorney’s Association, said Wednesday his group has yet to take any position on the issue this year. “We’ll have to read the bill see exactly what’s being proposed first,” Valdez said.

Sen. Brandt agrees. “This is a freight train coming,” he said, “and we could either lay the track, so it goes the right way, or we could watch the wreck.”

Cutline: A Santa Fe man rolls a joint Thursday at his home. Will this be the year New Mexico legalizes marijuana for adult recreational purposes? The conventional wisdom is no. But with a bigger number of Democrats in the House and polls showing majority support for the plan, it could be too close to call. Luis Sánchez Saturno/The New Mexican