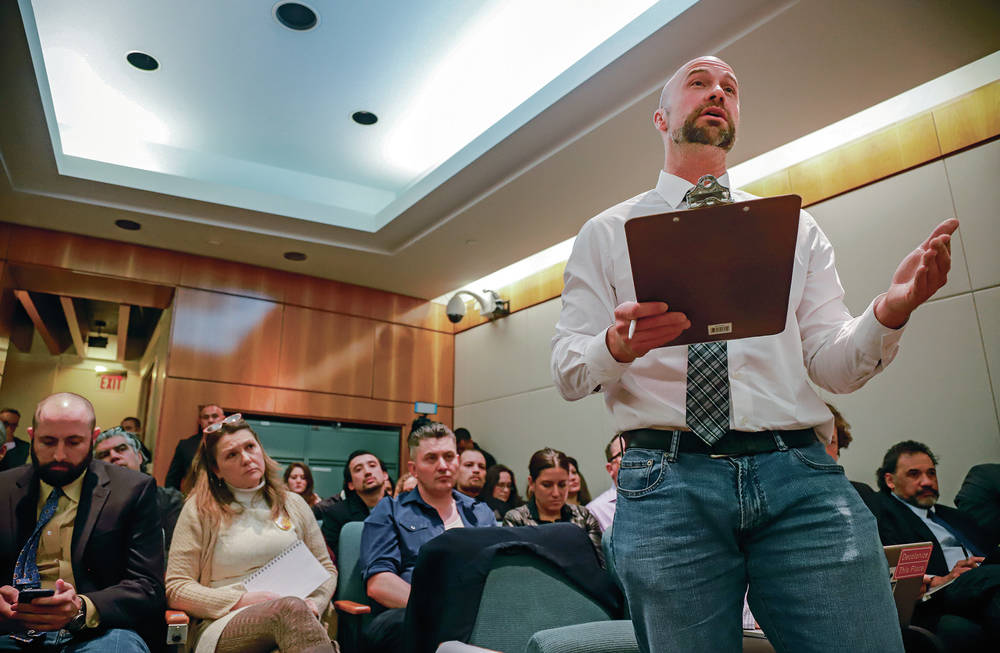 Bill McCamley, secretary-designate of the Department of Workforce Solutions, speaks in favor of House Bill 31 during a committee hearing Friday. The legislation would raise the statewide minimum wage to $10 an hour in July and increase it annually up to $12 an hour in 2021.

Democrats campaigned last year on a promise to raise New Mexico’s minimum wage, which has remained at $7.50 an hour for a decade.

How high it will go, exactly, is a question that quickly has become wrapped in a battle waged by the restaurant industry and could get caught in a tug-of-war between the state House and Senate.

The issue has raised a series of other questions as well.

The debate over those points was on full display Friday when the House Commerce and Economic Development Committee voted along party lines to advance a bill that would raise the state’s minimum wage to $10 an hour in July and increase it annually up to $12 an hour in 2021.

The Department of Workforce Solutions said raising the minimum wage to $10 an hour would mean a raise for 160,000 New Mexicans.

Neighboring Arizona and Colorado have already raised their statewide minimum wages — to $11 and $11.10 per hour, respectively.

But the restaurant industry is pushing back hard against a provision in House Bill 31 that would eliminate the current lower minimum wage for tipped workers of $2.13 an hour.

Under what is known as tip credit, businesses can pay their employees the lower base wage as long as employees make the equivalent of at least $7.50 an hour when tips are included.

The provision is key for the restaurant industry, which argues that requiring employers to pay servers many times more than they earn now would be ruinous for New Mexico eateries.

“We definitely support raising the minimum wage. I think it should be $15 an hour nationwide,” James Campbell Caruso, the head chef and owner of La Boca restaurant in Santa Fe, told the committee Friday.

But, he added: “By doing this, it’s going to put a lot of pressure on restaurants.”

Backers of HB 31 argue the provision is a matter of equity.

But even some Democrats expressed hesitance about eliminating the lower minimum wage for tipped workers.

“I’m really concerned about us removing that because I think it will make a great impact,” said Rep. Patricio Ruiloba, D-Albuquerque.

One of the bill’s sponsors argued, however, that the House should pass the legislation as it stands to save some latitude for negotiations with the more conservative Senate, where it is likely to face a tougher battle.

“This legislation is not a done deal,” said Rep. Miguel Garcia, D-Albuquerque. “We still have the Senate. And we in the House still want to reserve our negotiating power.”

Chairman Moe Maestas, D-Albuquerque, told the committee he expected the bill to be amended and said he would ask House Speaker Brian Egolf to send the legislation to one more committee — Appropriations and Finance — instead of putting it up to a vote on the floor immediately.

There are other bills wending through the Legislature to raise the minimum wage.

Rep. Patricia Roybal Caballero, D-Albuquerque, has proposed raising the minimum wage to $15 an hour starting in 2020.

And Sen. Clemente Sanchez, D-Grants, filed a bill Thursday that would raise the minimum wage but leave it a little lower than Garcia is proposing.

Moreover, it would keep in place the lower minimum wage for tipped employees.

One way or another, the minimum wage is going up, Democrats made clear Friday.

“It’s going to change between now and the governor’s desk,” Maestas said. But, he added: “House Bill 31 will become law.”

Democrats ran on raising New Mexico’s $7.50 hourly minimum wage. Here’s how they propose to do it:

What the bill does: HB 31 calls for the statewide minimum wage to increase to $10 an hour in July and rise annually until it reaches to $12 an hour in 2021. At that point, the minimum wage would be adjusted yearly based on the cost of living. The bill also would eliminate the lower minimum wage for tipped employees.

What the bill does: HB 46 would raise the statewide minimum wage to $15 an hour in 2020. The bill would adjust the minimum wage annually based on the cost of living. The bill also would eliminate the lower minimum wage for tipped workers.