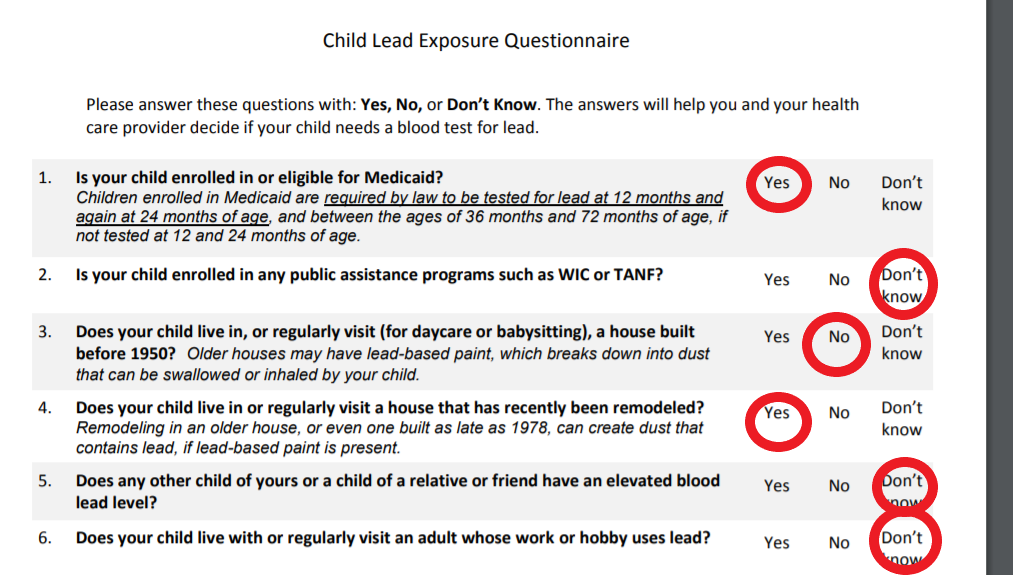 The NM Childhood Lead Poisoning Prevention Program has 13 questions to help you determine if you should test your child for lead. It's online at: https://nmhealth.org/publication/view/form/351/

In 2017, Reuters published a map on lead poisoning among children across the nation. The story examined where children were tested for lead and how many had high levels of the toxic metal in their blood. At that time, NM Political Report spent months trying to speak directly with experts at the New Mexico Department of Health (DOH) about that exact issue.

But Gov. Susana Martinez’s administration wouldn’t allow that. And we never got a complete picture of how state officials were handling childhood lead exposure.

Recently, however, Heidi Krapfl, the deputy division director of the Epidemiology and Response Division at DOH, walked NM Political Report through some of the data on lead exposure among children and talked about the department’s efforts to increase test rates statewide.

For children, there is no safe exposure to lead, which causes permanent neurological damage and behavioral disorders. Severe lead poisoning can lead to seizures, coma and death, according to the Centers for Disease Control and Prevention. And it’s a widespread problem: The CDC estimates four million households nationwide have children who are exposed to high levels of lead.

The need for more testing

“Lead exposure in New Mexico is pretty different than say, on the east coast, where you have older homes and typically, a child with elevated blood levels, it’s a child who has been eating paint flecks,” Krapfl explained. Then there was the emergency in Flint, Michigan, where tens of thousands of households were exposed to lead through their drinking water supply. “In New Mexico,” she said, “it’s much trickier.”

When a child tests for lead exposure, that data is reported to DOH. Working with parents and physicians, officials try to determine the source of the lead exposure.

One risk factor for exposure to lead is living in poverty. That’s why Medicaid guidelines require that children enrolled in the program be screened for lead at 12 and 24 months old.

But nationwide, test rates are low, according to a 2017 study published in Pediatrics, the peer-reviewed journal of the American Academy of Pediatrics. And during the time period studied, 1999 to 2010, New Mexico’s rates were among the nation’s lowest.

As we’ve reported, in 2014, only 26 percent to 40 percent of Medicaid-eligible children were tested, depending upon the health care provider. According to New Mexico Human Services Department (HSD) annual audits, Molina screened only 40 percent of the state’s Medicaid-eligible children for lead, Blue Cross and Blue Shield of New Mexico and Presbyterian each screened 33 percent and United Healthcare, just 26 percent.

Those numbers improved since then. But they’re still low.

Children on Medicaid are at higher risk for potentially being exposed to lead, Krapfl said, but all children between one and three who are exposed to certain risks should be tested.

Risk factors include living in an older house that might have lead-based paint; using orange, red or yellow powder like Greta or Azarcon or using “Navajo clay;” and living near a junkyard, dump, mine, smelter or busy street. (The questionnaire is online here.)

“I think there’s some perception that blood lead poisoning in New Mexico is not as bad as other places, and therefore we don’t have to worry about,” she said, noting that perception prevents some providers from encouraging parents to test their children. But health educators are working across the state trying to increase testing levels.

In 2017, New Mexico implemented the CDC’s new reference level and lowered the threshold for initiating case management from 10 to 5 micrograms per deciliter.

That year, the New Mexico Childhood Lead Poisoning Prevention Program (CLPPP) at DOH also “provided targeted outreach” to some specific at-risk areas, according to the program’s manager, Alex Gallegos. In addition to routine awareness outreach, they also visited Head Start programs, WIC programs and pediatric offices, focusing on southern New Mexico in particular, which accounted for more than 40 percent of the program’s outreach visits in 2017. They continued that increased intervention in 2018, though with fewer visits just to southern New Mexico. As a result of that outreach, Gallegos said, “NM CLPPP has begun to see improvements in southern NM with lead testing, data reporting, and pediatricians partnering with CLPPP on lead poisoning cases.”

Low rates of testing mean parents don’t know if their children have been exposed to lead. And they don’t give an accurate view of the problem. If test rates are low, and one or two children test positive, it will seem like a high percentage of children in the area have been poisoned.

“Our testing rates of children have been going up, especially for those areas we’ve spent a lot of [time doing] outreach in, the southeast and the southwest,” Krapfl said. “And we ended up getting more cases in 2017 than we had in 2016 because when there’s more outreach, and you do more testing, you get more cases.”

That’s a good thing. At least when it comes to figuring out where the problems are and how to address them.

“Our goal is to get every kid under the age of three tested for lead at least once, and making sure people understand these risk factors, and getting those kids tested [if they are exposed to risks],” she said.

What are the risks?

To explain some of the risks for lead exposure in New Mexico, Krapfl spoke with NM Political Report about the state’s 2017 data on childhood lead exposure. (The 2018 data will be finalized in late spring or early summer.)

The largest category, she said, is “unknown” exposures. In 2017, there were 53 unknown cases. That’s when an initial test reveals elevated lead levels in a child’s blood, but follow up tests don’t. After the first test, doctors or lead health educators consult with parents or guardians about how to reduce risks and exposures. “Then you re-test, and essentially, it’s no longer elevated,” she said. “But the source itself is never exactly determined.”

In 2017, three of the cases came from hobby works: “That’s when the parent has a hobby, like soldering,” she said, or a parent is exposed to lead at work, and unintentionally brings it home on their clothing or as dust.

Embedded lead bullet fragments, like in harvested meat, exposed two children in 2017. Seven were exposed from Mexican pottery and four from kajal, cosmetics traditionally applied in some families from Afghanistan, Pakistan and India around children’s eyes. Three more were exposed from lead-based paint in their homes, two from paints they were exposed to outside the home and five from what’s called “pica behavior”—that is, kids stuffing things into their mouth. And four, Krapfl said, were refugee children.

In 2017, she said, there were also nine “false positive” tests. That usually happens when doctors do a “finger prick” test rather than drawing blood, she said. And in six cases, doctors lost touch with the patient—the parents didn’t respond to follow-up calls or letters, or perhaps moved, and so officials couldn’t determine how the child was exposed to lead.

“This is the challenge we have: Until we can get the testing rates up uniformly across the state, we will have variable confidence in the rates,” she said. “We need to test more kids to say, ‘This is how we can be more confident about what we’re seeing and what the patterns are.’”

To learn more about lead exposure, read about risk factors, and find out about lead assessments and home visits: https://nmhealth.org/about/erd/eheb/clppp/