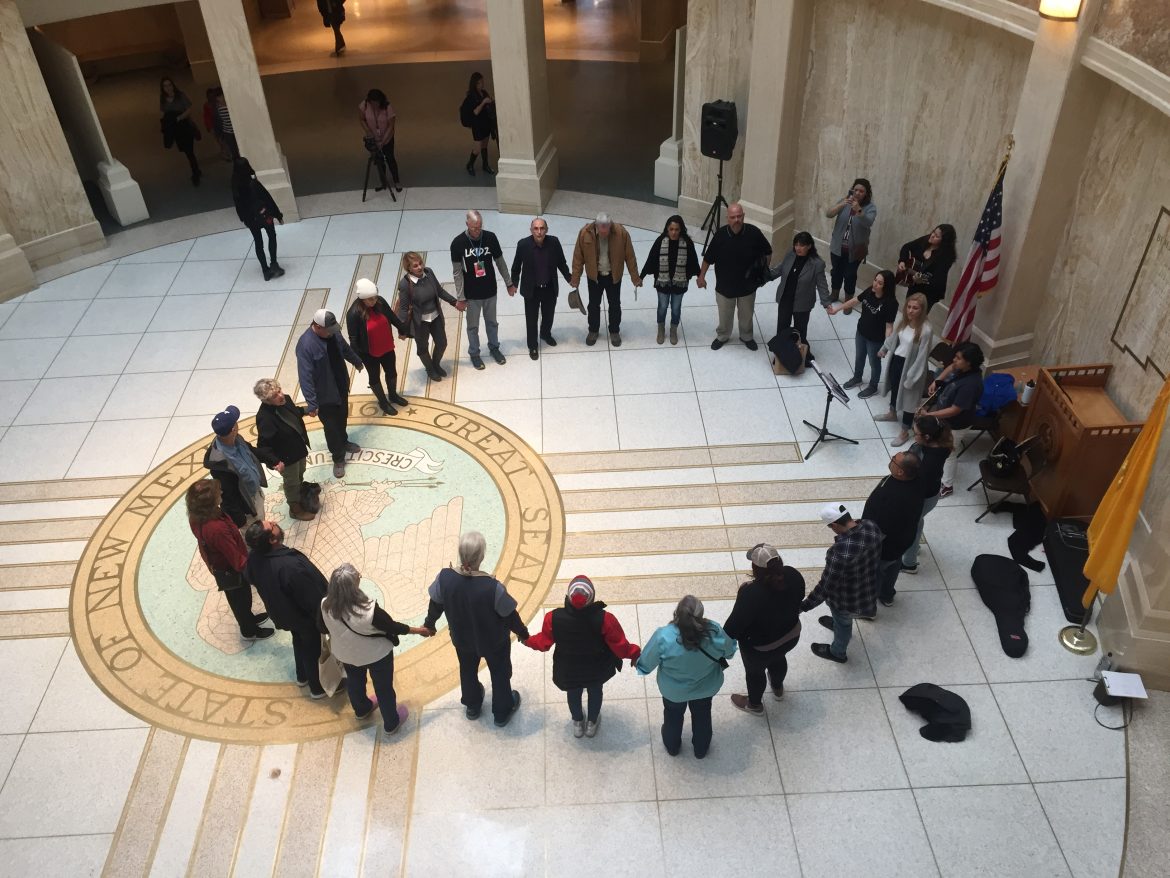 Opponents of House Bill 51 gathered in the Roundhouse rotunda after the bill passed its first Senate committee on March 2, 2019.

The bill to repeal a currently unenforceable ban on abortion in New Mexico passed the Senate Public Affairs Committee 4-2 along party lines Saturday afternoon and now advances to the Senate Judiciary Committee.

Rep. Joanne Ferrary, D-Las Cruces, and Georgene Louis, D-Albuquerque, sponsored the bill, which would repeal a 1969 state law which made both performing and receiving an abortion fourth-degree felonies, except with special permissions. The law is currently unenforceable because of the landmark Roe v. Wade Supreme court decision which federally recognized the right to have an abortion.

The committee hearing lasted just over two hours, and the room was filled to the brim and required overflow seating. Supporters and opponents of HB 51 were ushered in through separate doors and asked to keep public comment civil and short.

Gov. Michelle Lujan Grisham reaffirmed her commitment to sign the measure if it reaches her desk and met with the bill’s sponsors before the committee hearing.

However, supporters cautioned that while Democrats hold a majority of seats in the Senate, that doesn’t mean it will pass the chamber smoothly.

“You can’t make any assumptions based on political party,” Dr. Sandra Penn, a doctor in Albuquerque, who has been an outspoken advocate on the bill said. “Just because someone has ‘Democrat’ next to their name does not mean it’s a sure thing.”

All four of the Democratic members of the committee expressed their support for the bill, and Senators Antoinette Sedillo Lopez and Gerald Ortiz y Pino — both Albuquerque Democrats — took the stance that being Catholic and supporting abortion were not mutually exclusive.

Elisa Martinez, the executive director of New Mexico Alliance for Life said that despite the vote along party lines in the public affairs committee, that could change as the bill advances in the Senate.

“I hope that some of the senators in more conservative districts will listen to their constituency,” Martinez said.

Ingle, the minority leader, asked for a clarification from the experts on what the “conscience clause” means, a tension that’s been hashed and rehashed in every committee and floor hearing.

Ellie Rushforth, senior staff attorney at the New Mexican American Civil Liberties Union responded that there were “multiple redundancies” in federal and New Mexico statutes to protect doctor’s right to refuse to perform a procedure they morally oppose.

At one point in Ortiz y Pino’s closing statement murmurs erupted from those who opposed the bill, requiring a staff member to threaten to empty the room. He said legislators duty is not to tell people what is morally right or wrong, but what society decides to protect.

He directly addressed the bill’s opponents at one point.

“I think those people who want to believe that women should not have abortions, should exert their energy on educating their daughters and sons not to have abortions,” he said.

“But to get other people who don’t share their beliefs — to have to follow your beliefs with action of law is unfortunate.” he said pointing at the crowd, “It’s not the way we do things. We don’t force our beliefs on other people.”

After the vote, Ortiz y Pino asked if the audience if they could “Please clear the room now so the next controversial bill can enter.”

The opponents of HB 51 gathered in a circle in the capitol’s rotunda after the hearing to sing hymns such as “Amazing Grace” and prayed for senators to vote against the measure.