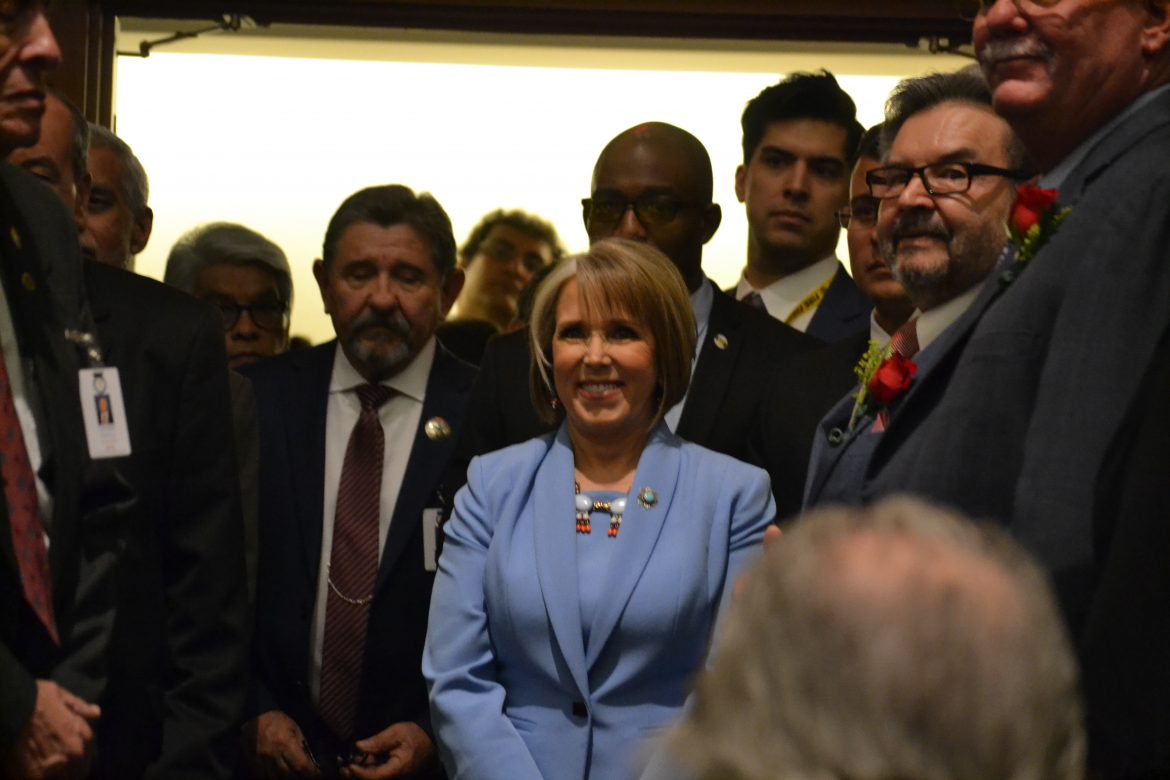 Gov. Michelle Lujan Grisham before delivering her 2019 State of the State address.

Gov. Michelle Lujan Grisham took the unusual step Wednesday of pressing for enabling legislation on a constitutional amendment that hasn’t been sent to the voters, much less been approved by them.

With her 3-year-old granddaughter, Avery Stewart, on her lap, Lujan Grisham served as an expert witness for Senate Bill 671. This proposal is contingent on voters someday approving the expenditure of half a percent of the $18 billion Land Grant Permanent Fund to expand early childhood education.

Lujan Grisham, a Democrat, helped get the bill through the Senate Education Committee on a party-line 6-3 vote. All the members of her party supported it, but the Republicans voted against it.

“This bill really doesn’t do anything, does it?” Brandt asked the governor.

He said approving an enabling law with nothing to enable is meaningless.

Lujan Grisham countered that she wants an ongoing conversation with key legislators about early childhood education.

She said everyone agrees that these programs are important because they get small children off to a good start in school and life. The only question, she said, is how to pay for early childhood education.

With Senate Bill 671 on a fast track, it is to go next to the Senate Finance Committee. The chairman of that panel, Democratic Sen. John Arthur Smith of Deming, continues to oppose using the permanent fund to pay for another program. It already helps finance K-12 public schools.

In addition, the Senate Rules Committee this week blocked a proposed constitutional amendment to use an even larger portion of the state endowment for early childhood education. Three Democrats joined all four Republicans on the Rules Committee to kill that measure in a 7-4 vote.

Soon after, Senate Bill 671 was authored with Lujan Grisham’s support.

Smith made it plain that he does not want to revisit the issue by taking up the bill she favors.

With fewer than two weeks left in the legislative session, Smith said with a grin that his committee might call the bill in 15 days.

“I’m going to honor the decision of the members of the Rules Committee,” he said.

Lujan Grisham said she wants to continue a conversation in Smith’s committee about financing of early childhood programs. Now that the bill has cleared the Education Committee, its next stop is supposed to be before Smith and the other 11 senators on his finance panel.

“It’s a contingency. There are different ways to approach different legislation,” Wirth said.

Smith last year declined to give a hearing to proposed constitutional amendment for early childhood programs, even though it had cleared the House of Representatives and the Senate Education Committee.

No members of Smith’s Finance Committee objected to his bottling up that proposal. It died in his committee.

This circumstance is different. Lujan Grisham wants Smith to take time in the stretch run of the legislative session to hear a bill that could not have any practical effect for at least two years.

Some Democratic legislators in 2020 will again propose using the permanent fund to help pay for early childhood education. An enabling law would be necessary only if the House and Senate agreed to place the measure on the ballot and then if voters approved it in the general election.