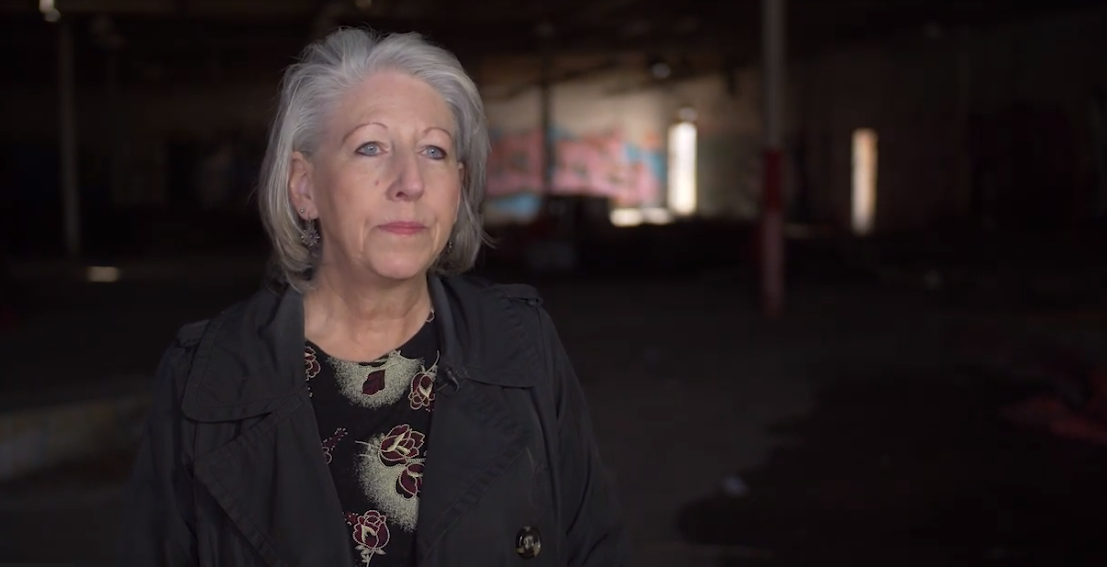 SOCORRO, NEW MEXICO—Just north of Socorro, a squat, square building sits on the west side of Interstate-25. There’s a gate across the driveway, but it’s wide open. And it’s easy enough to drive right onto the Eagle Picher Carefree Battery Superfund site.

There are signs of other visitors, too: Fresh graffiti graces the walls, inside and out, and a wooden pulpit poses more questions than it can answer. Rain has poured through holes in the ceiling, pooling on the concrete slab. There are tumbleweeds, spray paint cans, and on a windy late-February morning, steady bangs and squeaks from deep within the building.

“No one would be aware that this is a Superfund site unless they were led to it,” Cheri Lerew says of the 55-acre lot. She first found out about it in 2015, when the U.S. Environmental Protection Agency (EPA) tested her home, a couple of miles away, for vapors rising up from the contaminated groundwater below her neighborhood.

“I believe if they had treated the contamination when they found it, it wouldn’t be under my home,” Lerew said. She’s a woman on mission: printing out fliers to pass around town, hounding state and federal officials for documents and lawmakers, for answers. She’s angry that not enough people are paying attention to the plume of contaminated groundwater stretching out beneath this city of 9,000 people.

Like many places in New Mexico, what’s now the Eagle Picher Carefree Battery Superfund site has a long and winding history. In the 1930s, there was a barracks here for Civilian Conservation Corps workers. After that, it was a tuberculosis sanitarium. Then in the early 1960s, Eagle Picher manufactured circuit boards here. For more than a decade, those circuit boards were washed with chlorinated solvents. According to federal documents, the wastewater would spill into the floor drains and then to unlined lagoons on the property. The company left in 1976, and the City of Socorro operated a landfill there for a while. Then the company came back, leasing the property from the city and building non-automotive lead-acid batteries through the 1990s.

Near the open entry to the building, a circuit board erodes out of the sand. Lerew points toward the far end of the lot: “They had open-pit lagoons that they dumped their chemicals and trash in.”

There are no warning signs, or signs of any sort, at the site. According to U.S. Environmental Protection Agency documents “human exposure is under control,” which means people can’t be harmed from just being at the site. But the land and buildings can’t be used for other purposes. And the groundwater pollution underground is not under control.

One of many Superfund sites

Eagle Picher is among 16 high priority cleanup sites in New Mexico. Superfund sites on the National Priorities List are those that the EPA has ranked, screened and decided are serious enough to merit long-term cleanup. There are more than 1,100 NPL sites nationwide.

Here, they include uranium mills and mines in western New Mexico, groundwater pollution in Albuquerque’s South Valley and an abandoned refinery in Prewitt. There’s also the molybdenum mine that pollutes the Red River and lands around Questa and plumes of dry cleaning solvent in groundwater under a number of cities.

Most of these sites have been on the list for decades, and are in various stages of evaluation and cleanup.

A uranium mill in Milan was added to the NPL in 1983. Other sites were added in the ‘80s, too, including a contaminated gold-ore mill in Carrizozo and two chemical facilities in Albuquerque’s South Valley. The contamination at many of the sites dates back to the mid-twentieth century. In 1979, a break in the tailings dam at the United Nuclear Corp. uranium mill near Church Rock released 93 million gallons of radioactive sludge into the Rio Puerco. And groundwater contamination from dry cleaning operations is widespread and troubling, from Grants and Española to Albuquerque and Roswell.

In most cases, taxpayers bear responsibility for Superfund sites because the private companies that caused the pollution—after reaping profits from the mines and factories—have moved on or declared bankruptcy.

At the Socorro site, for example, Eagle Picher filed for Chapter 11 bankruptcy in 1991. It eventually settled over environmental liabilities at 24 sites, not including the one in Socorro, which wasn’t listed as a liquidated site or as a debtor-owned site at the time of the settlement. (According to court documents, until 1969, the company was called EaglePicher Company, and was then later renamed Eagle Picher Incorporated.)

Seven years later, in 1998, Eagle-Picher Technologies was incorporated, and acquired Eagle Picher Industries, one of Eagle Picher, Inc.’s divisions. According to court documents, among its 37 real estate property interests was a lease for the now-vacant plant in Socorro.

By that time, state and federal officials had known about groundwater contamination from the plant for more than a decade. In the late 1980s, the groundwater tested positive for trichloroethylene or TCE, a cancer-causing solvent, and lead was found in the soil. The well supplying drinking water was shut down, and the city installed new water lines to the affected residents. In the early 21st century, the state and federal agencies expanded their investigations, tracking the plume of contaminated groundwater—which had starting migrating south from the factory site, moving beneath a Socorro neighborhood and the north end of New Mexico Tech’s golf course.

Then, in 2005, Eagle-Picher Technologies filed for Chapter 11 bankruptcy. The next year, a motocross raceway that had been operating at the site shut down. Flash floods exposed lead battery plates and straps.

In 2007, over the objections of the company’s bankruptcy trustee, U.S. Bank, the bankruptcy court found Eagle-Picher Technologies liable for about $350,000 of the already-incurred cleanup costs and more than $8.7 million in estimated future costs. U.S. Bank appealed that decision.

Eventually, EPA and Eagle Picher settled over the costs, and the company was ordered to pay $163,261.42 for past costs, and $4.15 million toward future cleanup.

The EPA, Eagle Picher and the City of Socorro declined the opportunity to comment for this story.

‘You can just pick up and start shop somewhere else’

Today, the New Mexico Environment Department (NMED) has about 35 monitoring wells in Socorro, checking groundwater supplies and tracking the pollution plume. They tested again in early February near New Mexico Tech and will have those results soon.

“The real irony in this is that one time we were out there collecting groundwater samples and lo and behold: The sample bottles were made by Eagle Picher,” Rivera says. “So that’s that’s the beauty of bankruptcy, I guess. You can just pick up and start shop somewhere else.”

Rivera sketches a drawing of what they need to do to remove the TCE’s from the groundwater. The AOP, or advanced oxidation process, system will pump out the contaminated water, treat it to remove the TCE and return the cleaned water into the aquifer or water system.

Cleaning up the mess isn’t a matter of technological limitations. Instead, it comes down to money. The government needs about $16 million. Then, it will take about 30 years to clean a toxic mess the government has known about for almost four decades.

That’s three generations of New Mexicans who have lived atop the pollution.

According to New Mexico Department of Health spokesman David Morgan, the Cancer Concerns Workgroup was asked in 2015 to study cancer rates in the area. Their report didn’t show unusual rates, in comparison with the larger New Mexico population. But, he said, the agency plans to revisit the data later this year. And, he said, the Tumor Registry plans to look at the data by Census tract.

For people like Rivera, who spend their careers working on these sites, it can be a frustrating process.

“Sometimes you feel like you have your hands tied behind your back. As I mentioned before it’s funding. It deals a lot with funding,” Rivera says. “We’re dealing with a large area, we’re having to pump millions and millions of (gallons of) groundwater to run through this treatment system, the AOP, so it’s these (treatment) systems that take a long, long time.”

But there’s another problem, too.

Harmful gases rise from the plume, seeping up through the soil and water table. While the state agency regulates the water, the EPA analyzes where those gases might be coming into homes.

“I was disgusted. I was shocked,” she says. “I mean I have never known anyone that lived within a Superfund site. I have never. I still don’t.”

Lerew bought her house in 2007, the same year Eagle Picher was declared a Superfund site—and decades after the groundwater pollution was first discovered.

Now, as the agencies finish a cleanup plan, they also have to wait for the Superfund priority panel, which each year decides which sites, from more 1,100 nationwide, will be funded.

“I really didn’t know how to handle it,” Lerew says. “I’m like, what does this mean to me? So I started doing a lot of research, because I really wanted to know what it meant to me.”
When asked if she feels safe in her home, she says she doesn’t.

But even if she could get her home appraised and put it on the market, she doesn’t know that she would.

Staying put is a scary option. Moving means leaving behind the memories that come with a home. It’s expensive, too expensive for some. And deciding it’s someone else’s problem is how the Eagle Picher plume became a Superfund site.

This story was reported in partnership with New Mexico In Focus. To watch Friday’s episode of “Our Land: New Mexico’s Environmental Past, Present and Future” about Eagle Picher, visit here. You can also watch past episodes of the show at the New Mexico In Focus website or YouTube channel.

For information on the Eagle Picher Carefree Battery Superfund site, visit the EPA’s webpage. There is also a 2018 fact sheet for the site, in both English and Spanish.