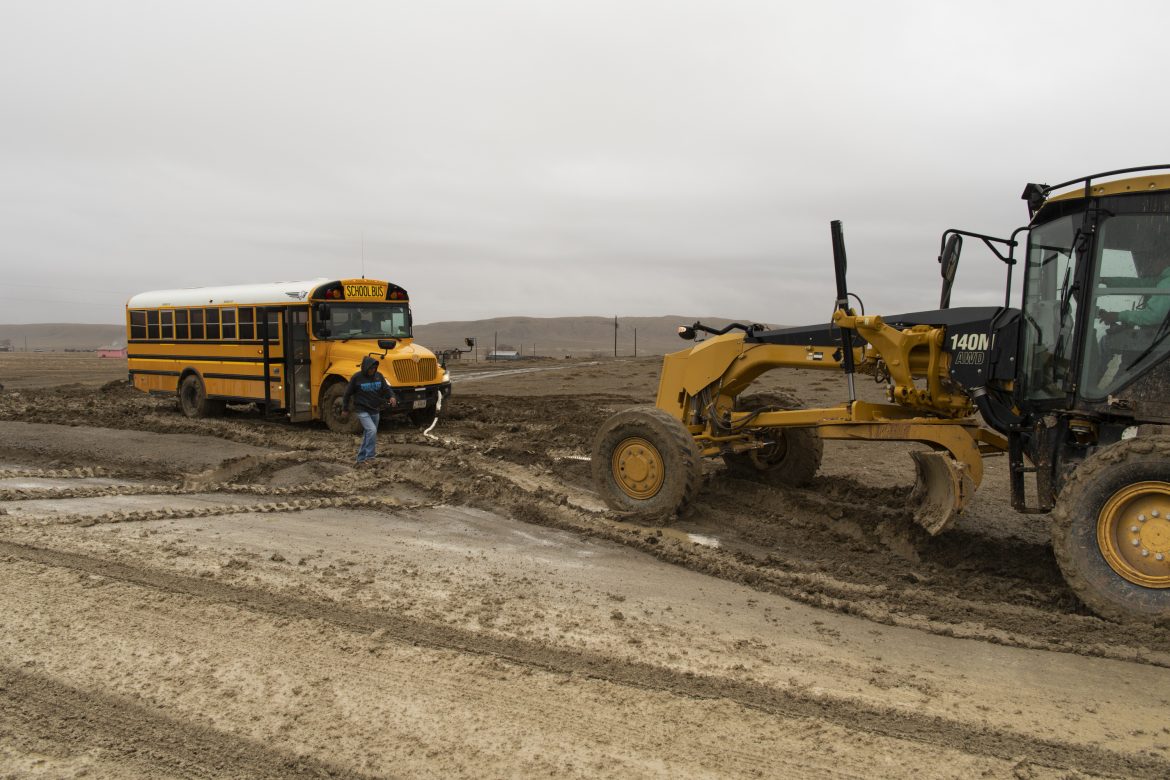 A road grader pulling a stuck school bus out of the mud.

The 43-year-old mother of two has spent a lifetime memorizing the jagged surface and thuggish boulders that define Indian Service Route 5010.

Locals just call it “the road” and gauge distances with landmarks: windmills, S-curves, a water tower covered with graffiti that once served as the town’s main source of gossip.

It’s an unpaved byway in the Sanostee Chapter of the Navajo Nation that feeds a network of unnamed dirt roads, serving hundreds of families in the shadows of the Chuska Mountains.

Generations of Begay’s family have herded sheep along this road; as a child she traveled it by horseback, alongside her father.

On a rainy day in the winter of 2004, her father collapsed in front of the cluster of small, wood-frame homes where she and her extended family still live. The energetic man of 75 had just arrived home from tending the family’s 60-odd head of sheep. He got out of his truck and crumpled to the ground. The rain that day was relentless, the mud impenetrable.

“It took three ambulances to finally get him,” Begay said. “The first ambulance got stuck in the mud, then the second got stuck.” Nearly four hours passed before the third ambulance reached him. He died in the hospital shortly afterward.

“I’ve always wondered whether he could have lived longer, if the road was better,” Begay said. “I’ll wonder that all my life.”

Rain or snow transforms the dirt into mud so thick that 15-ton school buses get mired up to their axles. School districts cancel classes. People can’t get to work or reach the main highway, U.S. 491, to access grocery stores — the nearest of which is 40 miles north.

“This has been forever a problem,” said LaVerda Washburn, a member of Sanostee’s Road Committee, a group formed two years ago to address Route 5010. “Every time it rains between November and March, we pray. The road grabs people and doesn’t let go. It has a hold on all of us.”

At about 27,000 square miles, or roughly the size of West Virginia, the Navajo Nation is the country’s largest Indian reservation. Since time immemorial, the Navajo have laid claim to these stark landscapes, where daily life and survival are intimately tied to the earth, to changing seasons, and to the traditions passed from one generation to the next. Although collective oral histories stretch back thousands of years, most family stories begin in 1868 — the year the Navajo signed a treaty with the United States that ended their incarceration at Bosque Redondo and allowed them to return to their ancestral homeland.

In addition to creating a Navajo reservation, the treaty spelled out the responsibilities of the federal government. In exchange for peace and the relinquishment of Navajo claims to land outside the reservation, the government pledged to provide a school house and a teacher for every 30 students.

The promises were essentially worthless. The federal government and its Bureau of Indian Affairs (BIA) have historically failed to furnish even the most basic infrastructure necessary to operate local schools. Among the most obvious failures: federal agencies refused to construct roads that would allow children to ride a bus to schools near their home. Instead, they were sent to distant boarding schools that stripped them of their Native language and culture.

A 1969 Congressional report excoriated the BIA for refusing to create basic roadways that would allow Native American families to stay intact and access an education. In New Mexico, it was not unusual for students to walk two miles to board a bus, then ride 50 miles to school.

Not much has changed in the last 50 years. With a population hovering around 400, Sanostee is a tight-knit community where people look out for each other, often driving long distances to check on elderly residents or deliver care packages. Yet one rain storm can cut the chapter in pieces, washing out bridges and culverts and stranding residents.

Amber Kanazbah Crotty, who represents Sanostee on the Navajo Nation Council, called the lack of infrastructure an abuse of human rights and a violation of the federal government’s treaty obligations.

“This systemic negligence has led to lost opportunity, education, economic development and ability for communities to thrive,” she said. “In denying us roads, the federal government has denied us access to basic human rights like education and health care.”

Of the 11,600 miles of road on the Navajo Nation, 9,000 miles are dirt, according to Garret Silversmith, director of the Navajo Division of Transportation.

NDOT operates with a yearly budget of about $60 million, money that comes from the Federal Highway Administration, fuel excise taxes and the tribe’s general operating fund. Of that, more than $5 million per year goes to blading — or grading — unpaved roads. Blading costs $750 per mile, and it lasts only until the next big rain. The $5 million budget covers blading for 15 miles of roads per chapter, per quarter.

“If you add that up, it’s 60 miles per chapter per year,” Silversmith said. “So we can only focus on the highest priority routes. Because blading just smooths the surface, we end up blading the same 15 miles four times every year.”

The cost for permanent improvements is astronomical. According to the most recent estimates, pavement costs $3 million per mile, while cheaper alternatives like double chip seal or gravel cost $350,000 and $250,000 per mile, respectively. Just putting down gravel on all the Navajo Nation’s roads would cost more than $2 billion.

Lost in space (and time)

Now nearing 70, Emil Benally and his wife, Jean, are raising their 4-year-old great-grandson on the small farm that has sustained six generations of his family.

That farm, nestled deep in a secluded canyon and accessible only by way of a winding, rugged lane, marks one end of Route 5010. “When I was a toddler, my grandparents told me stories about the land,” he said. “At one time, we had cattle here, enough water for farming, even an orchard. We had everything we needed.”

Back then, going to town meant hitching a wagon to a team of horses, traveling up the steep incline and weaving around the boulder-fringed hairpin turns. As a teen, Benally walked seven miles each way to a summer employment program. During the blizzard of 1967, helicopters hovered overhead, dropping food and other provisions to the family below. The National Guard came in by foot to help shovel the sheep out of the corral.

“The road has always been difficult,” Benally said. “Every year there were times in the winter or spring when the mud or snow was too deep to get out.”

He hopes his great-grandson won’t have to battle for a road all of his life, as so many Navajo have done.

“If you live in a city with paved roads, you can’t even imagine this,” Benally said. “It’s like we’re lost somewhere in the past.”

This story was funded in part by a generous grant from the USC Annenberg Center for Health Journalism.