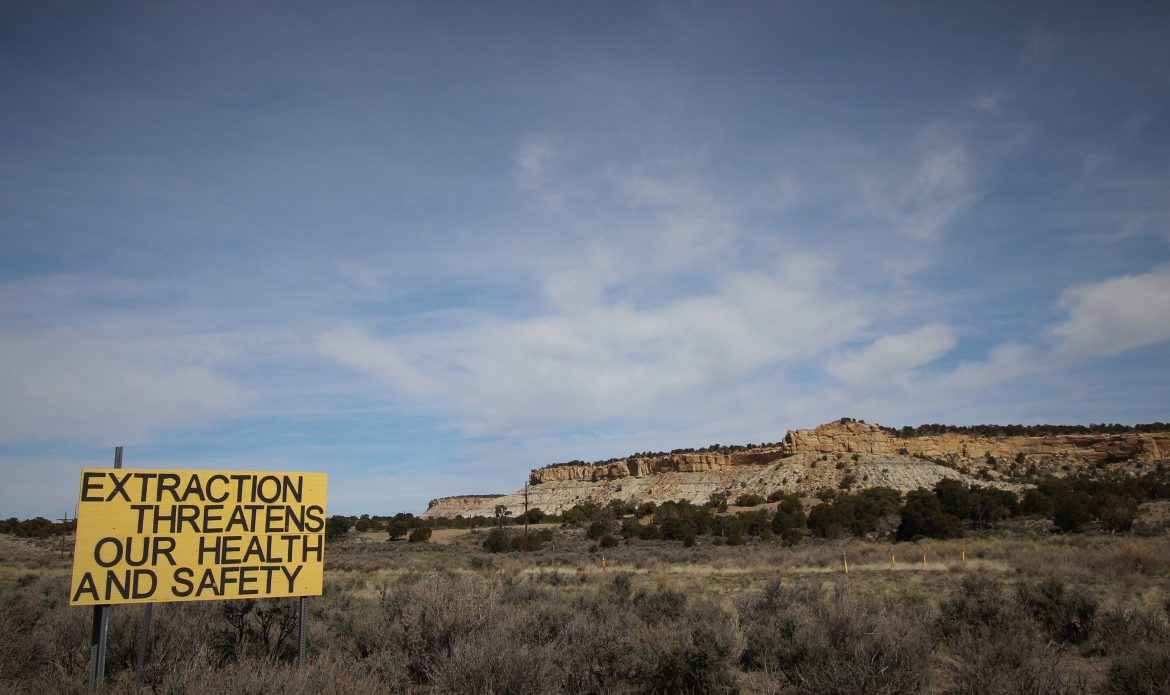 A sign along Highway 550 in northwestern New Mexico, near Lybrook

All week, we look for stories that help New Mexicans better understand what’s happening with water, climate, energy, landscapes and communities around the region. We love when you read the NM Environment Review on our webpage. But wouldn’t you rather see all the news a day earlier, and have it delivered straight to your inbox? To subscribe to the weekly email, click here.

Last week, when Gov. Michelle Lujan Grisham signed the last of the bills from the 2019 legislative session, she line-item vetoed $1.698 million in New Mexico Unit funding for the Gila River diversion.

Tripp Stelnicki, the governor’s director of communications, said Lujan Grisham has been clear about her views on the diversion project. He added that the administration’s opposition to it “does not come down to one veto or one source of funds but rather the policies that will be spearheaded by the OSE and ISC.” The Office of the State Engineer and the Interstate Stream Commission are the state’s two water agencies.

Since January 2012, the U.S. Bureau of Reclamation has deposited more than $60 million into New Mexico’s coffers for the project. Already, about $15 million of that money has already been spent (plus about another $2 million in state money), even though plans for the project have yet to be solidified and no one has yet identified buyers for the water, which would cost about $450 per acre foot. (And those contracts would need to be approved by both the New Mexico Office of the State Engineer and the U.S. Department of the Interior.)

After the New Mexico Interstate Stream Commission voted in 2014 to build the diversion, the state created the New Mexico Central Arizona Project. Made up of representatives of local irrigation districts, counties and towns, the entity oversees its construction, maintenance and operation. To receive the full federal subsidy for the project, the entity is supposed to have completed environmental studies and received approval from the secretary of the Interior Department by the end of 2019. But despite the millions of dollars spent, the project is about 18 months behind schedule.

To see all our past coverage of the issue, visit: https://nmpoliticalreport.com/tag/gila-river/

• In other news, New Mexico’s congressional delegation reintroduced the Chaco Cultural Heritage Area Protection Act, trying to create a buffer around the park and local communities and put about 300,000 acres surrounding Chaco Culture National Historical Park off-limits to oil and gas drilling. Scott Turner with the Albuquerque Journal covered the bill, as did Steve Terrell at theSanta Fe New Mexican.

• If you like water, there’s a cool story at KJZZ about Arizona’s rivers and the way they flow.

• The revised Clean Water Rule, or Waters of the U.S. Rule (or WOTUS), is available on the EPA’s website, and the 60-day public comment period ends on April 15.

• The Santa Fe Reporter’s Leah Cantor wrote about the waves of students who are learning about, and protesting over, climate change. “The message is clear,” Cantor wrote. “Kids want us to engage.” Read her story here.

• On Monday, we reported on the state of New Mexico’s most recent tests for toxic chemicals in the groundwater below Cannon Air Force Base. Yesterday, the Arizona Republic reported that the U.S. Air Force is going to expand testing around Luke Air Force Base.

• The Arizona Republic also has a story about the U.S. Fish and Wildlife Service’s latest population numbers for Mexican gray wolves in the southwestern U.S. According to FWS, 131 wolves are “nearly evenly distributed” in Arizona (64 wolves) and New Mexico (67). That’s up from 117 documented in 2017. If you want to look at the rest of the numbers yourself, click here.

• Lastly, if you live in Socorro and have a private well, the New Mexico Environment Department and Department of Health will test your water for free this weekend. The water fair is from 9 a.m. to noon this Saturday at the Socorro Farmers Market (1002 Ake Avenue). To participate, you’ll need to bring a water sample and some basic information about your well. There’s more information online here.