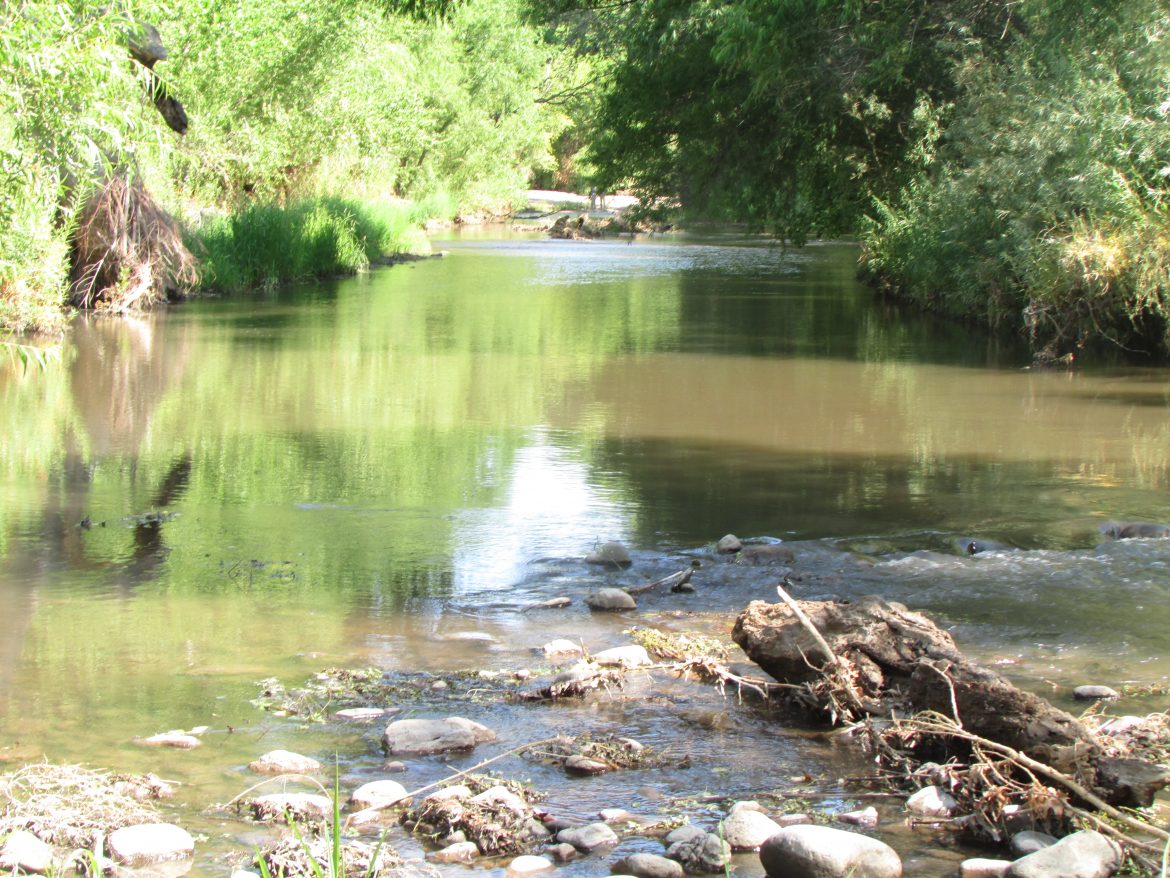 The Gila River, downstream from where the planned diversion would be

SILVER CITY, N.M.—On Monday morning, the organization responsible for planning and building a diversion on the Gila River convened a special meeting to discuss a letter from the U.S. Bureau of Reclamation. In that letter, the federal agency reiterated concerns over the project’s schedule.

During the special meeting, New Mexico Central Arizona Project (CAP) Entity board members placed blame for the delays squarely on the shoulders of Reclamation itself, along with the contractor hired to conduct environmental studies, environmental groups and the administration of former-Gov. Bill Richardson.

NM Political Report obtained a copy of the letter, which is from Reclamation’s Phoenix office area manager, Leslie Meyers. In it, Meyers follows up on a March 15 conference call between Reclamation and the CAP Entity and asks if the group plans to continue spending money on the environmental impact statement (EIS). She also suggests that the board formally request a deadline extension if it wants federal funding to remain available.

In her letter, Meyers writes that during the March call they discussed that it is “becoming extremely unlikely” that the Secretary of the Interior will have enough information to issue a decision by the end of 2019. That’s a key deadline mandated by the federal law that authorized New Mexico to build the diversion.

CAP Entity Executive Director Anthony Gutierrez seemed surprised by the letter. “We don’t know why they’re not able to meet the deadline,” Gutierrez said during the meeting, adding, “I think we need to visit with them and see exactly why it’s not being met.”

Meyers notes in the letter that the CAP Entity provided its initial plan for the diversion to Reclamation in July 2016, and then amended the plans in 2017 and again on multiple occasions throughout 2018 and 2019.

The Interior Secretary must issue a final decision on the diversion by the end of 2019 for New Mexico to receive the full federal subsidy for the project. According to the enabling federal legislation, the secretary can extend the deadline, but only if New Mexico shows it wasn’t responsible for the delays.

In 2004, while settling Indian water rights in Arizona, Congress gave New Mexico ten years to decide whether to meet water needs in Catron, Grant, Hidalgo and Luna counties by tapping a federal subsidy for conservation and efficiency projects, or by receiving a larger subsidy and building a diversion on the Gila River and its tributary, the San Francisco. New Mexico wouldn’t own the water outright. Rather, the 2004 Arizona Waters Settlement Act allowed New Mexico to trade with Arizona’s Gila River Indian Community.

In November 2014, the New Mexico Interstate Stream Commission chose the diversion alternative—and the bigger pot of money to implement the project. At the time, Commissioner Blaine Sanchez was the sole dissenting vote against the diversion—citing concerns about its cost—and Commissioner Topper Thorpe, who was also chairman of the Gila Basin Irrigation Commission, abstained from the vote. Then-State Engineer Scott Verhines, Chair Jim Dunlap, Mark Sanchez, Buford Harris, Jim Wilcox, Randal Crowder and Phelps Anderson all voted in favor of the project. Crowder and Anderson are now state representatives.

Then, in 2015, the state created the CAP Entity. The organization includes members from counties, cities and villages and irrigation districts that are now responsible for building the project and reimbursing the federal government for operation, maintenance and repair costs. Since its creation in 2015, the CAP Entity struggled to meet deadlines and propose a design and location for the diversion. It scrapped plans to build the state’s original diversion project, which would have cost about $1 billion. But without a firm plan, location or engineering design in place, federally-required environmental studies didn’t begin until June 2018—about 18 months behind schedule.

Under the original timeline for the project, that scoping period should have begun in the winter of 2016/2017, and the draft EIS was supposed to be released in the summer of 2018.

At an interim committee hearing last year, state lawmakers again questioned the diversion’s progress, and asked how New Mexico might meet the deadline. At the time, state Sen. Joe Cervantes, D-Las Cruces, told the CAP Entity’s attorney, Pete Domenici, Jr. that the state should “begin the appropriate process” to work with the federal government on extending the deadline. Cervantes said that he feared, “in the middle of 2019, when we’re not in session, we’re going to find out this project is going to cost much more money, or we’re going to be paying an exorbitant amount of money for water for a handful of farmers.”

At Monday morning’s special meeting, board members were angry about Reclamation’s letter. And they indicated it was Reclamation, not the CAP Entity or the state of New Mexico, that required a time extension.

CAP Entity Board Member Allen Campbell said he received a copy of the letter late in the afternoon—and it “irritated” him so much he woke twice in the night to re-read it. He said he was unsure if Reclamation’s request for more time was due to politics or ineptitude and noted that the Trump administration ordered agencies to expedite environmental impact statements. Reclamation’s inability to do so with this project, he said, is a “snafu.”

He also said that the plans laid out by the CAP Entity are “excellent.”

Director Howard Hutchinson echoed Campbell’s sentiment, adding he, too, has been sleepless over the letter. He added that the Richardson administration, which ended in 2010, along with environmental groups, had “forced the people of this region into over 200 studies, and delay after delay after delay.”

Hutchinson also said his research into an internal draft document revealed problems with the EIS. He said he believes that the contractor working on the study lacks knowledge of New Mexico water law and the region’s history and that its employees failed to complete critical studies of threatened and endangered species in a timely manner.

“All of this has indicated to me that the contractor that was selected to do the EIS is either grossly incompetent or deliberately fouling up the waters. Pun intended,” Hutchinson said.

Campbell said he believes there is “sufficient malfeasance involved.” Both he and Hutchinson suggested the U.S. Department of the Interior’s Inspector General should investigate.

After discussing the issues, board members passed two motions unanimously: the CAP Entity plans to continue its work on the diversion project, and they agreed the EIS process should continue. They did delay, however, voting whether to approve Reclamation’s proposed project plan for fiscal years 2020 and 2021 until their regularly scheduled meeting in May.

The board also approved travel plans for Gutierrez and Domenici to meet with Interior Secretary David Bernhardt. The U.S. Senate last week confirmed Bernhardt as secretary, and he now oversees multiple agencies, including Reclamation, U.S. Fish and Wildlife Service and the National Park Service.

Campbell said a “pre-emptive visit” with the secretary would clarify if Reclamation’s stance is “consistent” with Bernhardt’s and President Donald Trump’s.

During the public comment period at Monday’s meeting, a handful of opponents of the diversion spoke for three minutes each.

Mary Burton Risely said she owns land along the Gila River, and began attending stakeholder meetings on the Arizona Water Settlements Act when they began about 15 years ago. “I am a witness to the struggles that we as citizens of these four counties have gone through,” she said. “And there is absolutely no way we can claim [the delays] are anyone’s fault but our own.”

The situation on the Gila has also drawn national attention.

In its annual report of the nation’s “most endangered rivers,” American Rivers put the Gila River at the top of the list this week. The advocacy group said the diversion will harm the Gila, which flows out of the nation’s first designated wilderness area. It will threaten endangered species and some of the “last remaining intact riparian forest” in the Lower Colorado River Basin, they said, as well as harm recreational opportunities.

And acting on campaign promises that she would oppose the Gila River diversion, Gov. Michelle Lujan Grisham line-item vetoed $1.698 million in New Mexico Unit funding for the project earlier this month.

Since January 2012, the U.S. Bureau of Reclamation has deposited more than $60 million into New Mexico’s coffers for the project.

To see NMPR’s past coverage of the issue, visit: https://nmpoliticalreport.com/tag/gila-river/