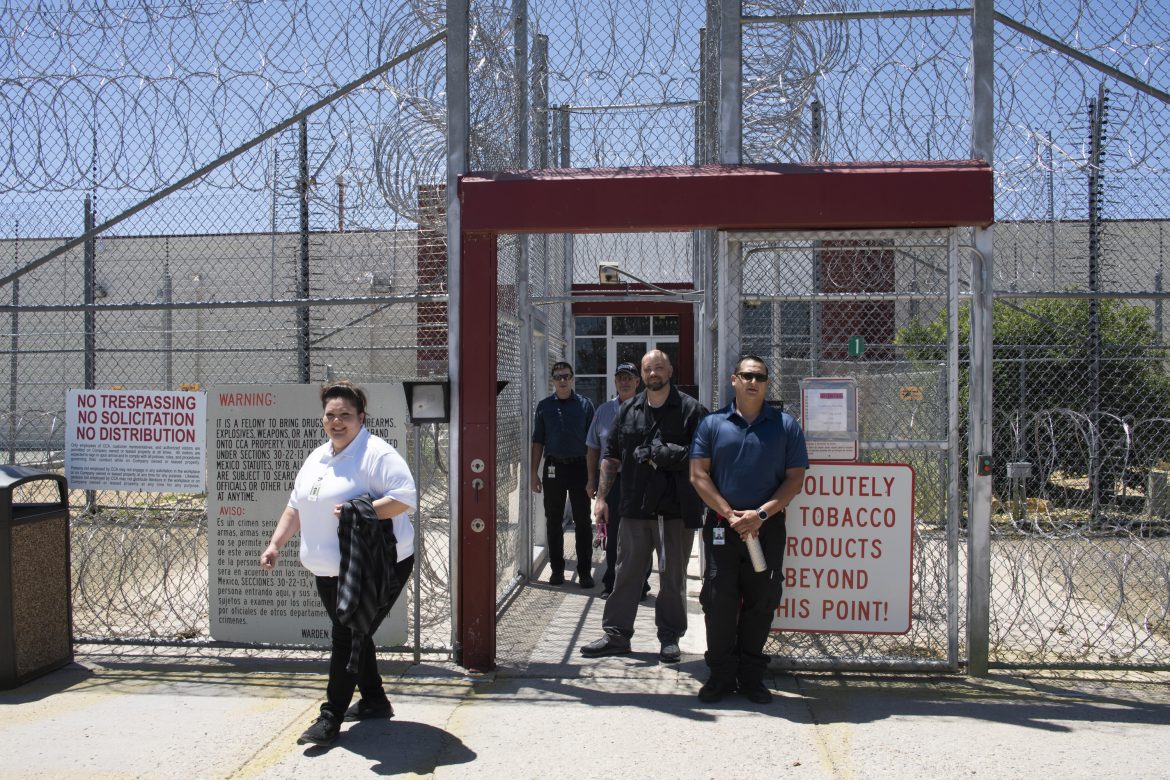 ESTANCIA — Two years ago, the county jail in this small town shut its doors because it didn’t have enough inmates to lock up. Hundreds of jobs evaporated, and the town lost a million dollars in tax revenue and other payments.

Then in May, Torrance County landed a contract with the federal government to re-open the jail — mostly to house migrants detained by Immigration and Customs Enforcement. The contract was a windfall for a town where steady, well-paying jobs are few and far between.

“Now that it’s comin’ back, money’s comin’ again!” exclaimed Bo Bardy, who has worked at Gustin Hardware in Estancia for the past five years.

That money derives from the business of incarcerating migrants, many of whom are coming to the U.S. from Central America to seek asylum. U.S. Customs and Border Protection stopped about 144,000 people near the Mexican border in May, according to federal data, a 13-year record high.

The numbers may be burdening an overtaxed system of immigration courts, but they provide a neat revenue stream for counties around the country, including many in New Mexico, that are able to negotiate valuable contracts with the federal government.

“It’s definitely enough to keep us in the black,” said Chris Brice, director of the Luna County Detention Center, which collects per-day payments from the federal government for housing federal inmates. Brice said that the number of federal inmates has doubled since he started in the job just over two years ago, and about 80 percent of them are there on immigration-related charges.

The federal government has made it well worth the county’s while, with payments that have increased by about $1 million over the past three years, in actual or projected revenue. Those funds are expected to make up more than two-thirds of the detention center’s revenue this fiscal year, according to a Luna County document.

The business of detaining migrants

The jail in Estancia is run by CoreCivic, one of the largest private detention companies in the country. CoreCivic profits handsomely from the business of detaining migrants; last year, it brought in $459 million from ICE, according to the company’s annual report.

“[ICE] is facing a critical, emergent need for detention capacity,” Brandon Bissell, a CoreCivic spokesperson, said in a statement to Searchlight New Mexico, explaining why the company decided to reopen the Torrance County facility.

It is a large jail, with room for about 1,000 inmates, and under the new contract, up to 892 of them could be migrants.

ICE keeps migrants under lock and key while their cases wend their way through administrative immigration courts. A report in Buzzfeed News found that in May ICE was detaining an estimated 52,000 migrants around the country.

The U.S. Marshals Service also rents out space in local jails and prisons to house people charged with a variety of federal crimes, including ones that are immigration-related. As of April, nine of those facilities were in New Mexico, where about 2,000 people a day were detained. The Marshals paid daily rates between $58 and $83 for the incarceration of each inmate.

In total, between October 2016 and September 2017, the Marshals locked up about 58,000 people on immigration offenses, according to that agency’s data.

A Marshals spokesperson, Lynzey Donahue, said that the numbers of inmates being held in New Mexico on immigration-related charges in recent years were “not readily available” and directed Searchlight to file a Freedom of Information Act request, which has not yet been fulfilled. But some county officials report a recent increase.

In Lea County, for example, the number of inmates being held on immigration-related offenses has increased by 25 to 30 since January, according to County Manager Mike Gallagher. Each one brings in $65.50 a day.

In fiscal years 2017 and 2018, the county received about $1.7 million and $1.5 million, respectively, from the Marshals. So far this fiscal year, which ends in June, the figure comes to just over $1.2 million, Gallagher said.

Luna County has also seen an increase in the number of federal inmates detained for immigration-related offenses, Brice said. And that’s happening at the same time that the county has been dealing with a surge in thousands of asylum seekers that federal agents have been dropping off in Deming, the county seat. In June, New Mexico sued the federal government, claiming it should provide more assistance to towns that have to deal with such a large influx.

To the west, in Lordsburg, Hidalgo County Manager Tisha Green said that her detention center has also seen an increase in federal inmates held for the Marshals since February 2018. Most of them, however, are there on drug charges — not immigration-related crimes.

“We’re thankful it’s happening now, because we were in quite a deficit for a really long time,” Green said.

But for all its potential profit-making, incarcerating migrants is an inherently risky business, subject to changes in migration patterns, political will, and federal policy.

Estancia knows that all too well. Torrance County previously had a contract with the Marshals, which collapsed in 2017 when the federal government wasn’t sending enough inmates its way. The jail closed down as a result.

That was a hard time for Estancia, a town of about 1,600 that sits 20 minutes south of I-40, east of the Manzano Mountains. The jail was the town’s largest employer and one of its most important sources of revenue. When it closed, the town budget shrank by about a million dollars, according to Mayor Nathan Dial.

Municipal employees were cut back to a four-day work week, the city froze new hires, and 4th of July fireworks were canceled, said town clerk and treasurer Michelle Jones. The town managed to keep the pool open, but only because of donations that poured in.

Now, with the jail about to reopen, the economy has suddenly grown livelier. Mama Bears, a bustling café on the main road, is taking in about $60 more per day, as prison guards stop by for breakfast burritos before the morning shift.

“Our customer base has really increased as the prison started hiring again,” said Kathy Swope, who runs the café with her husband Jimmy.

And Felix Barela is looking forward to a regular salary.

“It’s been hard to make monthly payments just on utilities,” said Barela, who just got a job working maintenance at the facility. “It will make it a little bit easier.”

Mayor Dial, however, is cautious. He knows that the windfall may not last forever, especially since the county or ICE can terminate the agreement with only 120 days’ notice.

As a result, Dial is hedging his bets, with plans to save 60 percent of the tax revenue from the prison and spend the other 40 percent.

“We may end this situation in two years,” he said. “There’s no way to tell how long it’s going to be open.”