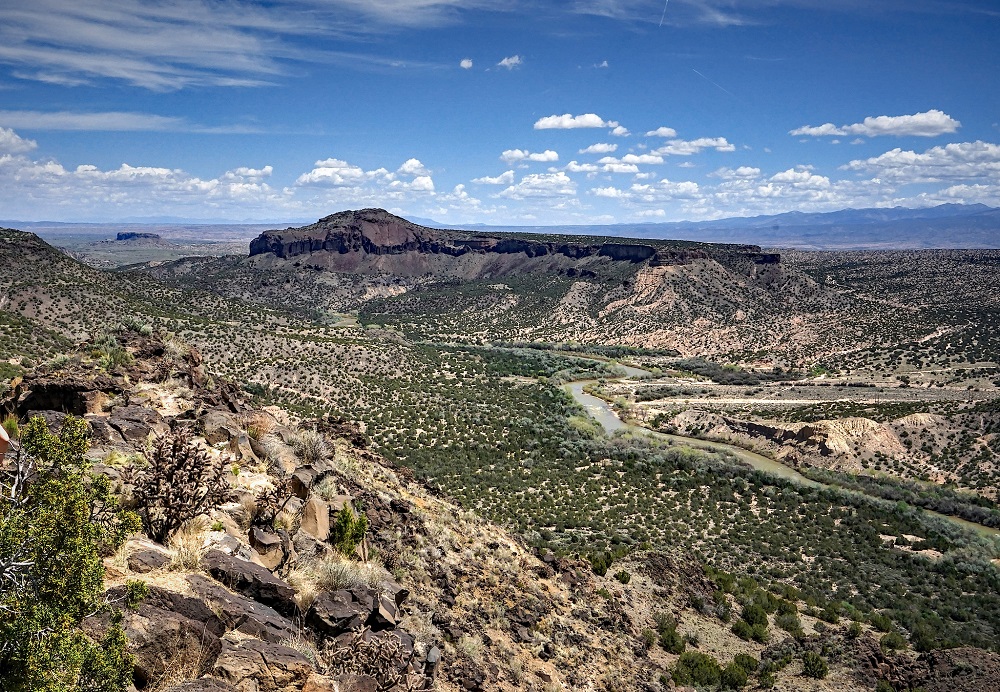 A view from White Rock Overlook, near Los Alamos.

A Taos-based water conservation group has been waiting for the EPA to make a decision about a stormwater permit for over five years, while pollution coming from urban stormwater runoff in Los Alamos County, the group alleges, continues to threaten water quality standards.

Amigos Bravos wants a final determination from the EPA in response to a petition it filed with the agency back in 2014.

“It’s been 1,833 days since we petitioned,” Rachel Conn, projects director at Amigos Bravos, said in an interview. “Under the regulations, they are supposed to respond within 180 days. So, we are close to two thousand days overdue.”

In June, the organization filed a notice of intent to sue the EPA over the failure to act.

At issue is the regulation of stormwater discharge from the urban areas of Los Alamos County. The runoff from parking lots, construction sites and roadways in urban centers in Los Alamos and White Rock Canyon is currently unregulated for contaminants.

And without the EPA taking action on the issue, nothing can be done about the pollution.

A history of stormwater pollution in Los Alamos

Amigos Bravos’ petition notes that “many” of the watersheds in Los Alamos County continue to be “highly polluted.”

“We’re talking about some pretty high levels of pollution and cause for concern,” Conn said. “It’s something that we have the ability and the technology to do better, to control these discharges from urban areas. That’s what we’re asking EPA to do, to require that the county and the lab take these steps to control this pollution.”

NMED has known about the pollution since at least 2006, according to the petition. The pollution was also mentioned in the state’s 2012-2014 report on water quality, in which NMED noted that impervious surface and parking lot runoff, post-development erosion and sedimentation, and industrial and commercial site stormwater discharge likely contributed to the pollution.

The LANL report concluded that “suspended PCBs carried by urban runoff from the Los Alamos townsite were 10 to 200 times more enriched than at the Pajarito Plateau baseline sites.”

The urban areas of Los Alamos County have slipped through the cracks of the regulatory framework for stormwater discharge, according to Andrew Hawley, the staff lawyer at Western Environmental Law Center representing Amigos Bravos in the lawsuit against the EPA.

Under the federal Clean Water Act, all industrial sites, including LANL, must have stormwater discharge permits through the National Pollutant Discharge Elimination System (NPDES). Large and mid-sized cities must also have stormwater discharge permits, referred to as municipal separate storm sewer system (MS4) permits, but smaller municipalities are not required to obtain such permits unless there is proof that runoff from urban areas are violating water standards.

“When EPA determines that unregulated stormwater discharges are impacting water quality, they’re required to issue an NPDES permit to regulate those discharges,” Hawley said in a phone interview.

The 2014 petition was an attempt to bring the pollution issues to trigger an NPDES permit process which would require Los Alamos County to obtain an MS4 permit. Under the regulations, EPA has 180 days to make a final determination on whether or not the situation calls for a permit.

But instead, EPA responded with what it called a “preliminary determination” eight months later in March 2015. The determination was “to designate the MS4s on LANL property and urban portions of Los Alamos County as storm water discharges requiring NPDES permit coverage.”

While Amigos Bravos found the preliminary response encouraging, EPA has yet to make a final determination on the issue, nearly five years later.

“The law just requires them to respond to the petition and then take the action,” Hawley said. “Instead of doing that, they issued this preliminary determination and then haven’t acted on it since. It’s a bit of a curious decision on their part.”

In response to a request for comment on the five-year delay, an EPA spokesperson said the agency “continues to consider the original petition from Amigos Bravos,” and that is “has received the notice of intent to sue and will respond as appropriate.”

The vast majority of states in the U.S. have taken over NPDES permitting authority from EPA since the Clean Water Act was enacted. New Mexico is one of only three states that still rely on EPA to handle NPDES permitting.

While there are some benefits to leaving that authority with EPA, responsiveness is not one of them. With recent regulatory rollbacks at the agency, the argument is stronger than ever for New Mexico to assume NPDES permitting authority, Conn said.

“We support the state developing a permitting program,” Conn said, pointing to the Trump administration’s proposed amendments to the Clean Water Act, which Conn said removes federal protection “for almost all of our waters in the state.”

NM Political Report asked NMED if Secretary James Kenney has any intention to pursue taking over such authority from EPA during his tenure. A spokesperson said the department “is considering how NPDES program authorization would benefit water quality throughout the state, as well as the resources that would be required for the State and the Department to effectively administer the program.”

Speaking at a recent public meeting in Los Alamos, Kenney fielded a question from an audience member about Amigos Bravos’ notice of intent to sue.

“I don’t know what EPA’s response is going to be to that,” he said, adding, “My job is to make sure that, as the protections are proposed to roll back water quality at the federal level, we’re doing everything we can to protect water quality in the state of New Mexico at the state level.”