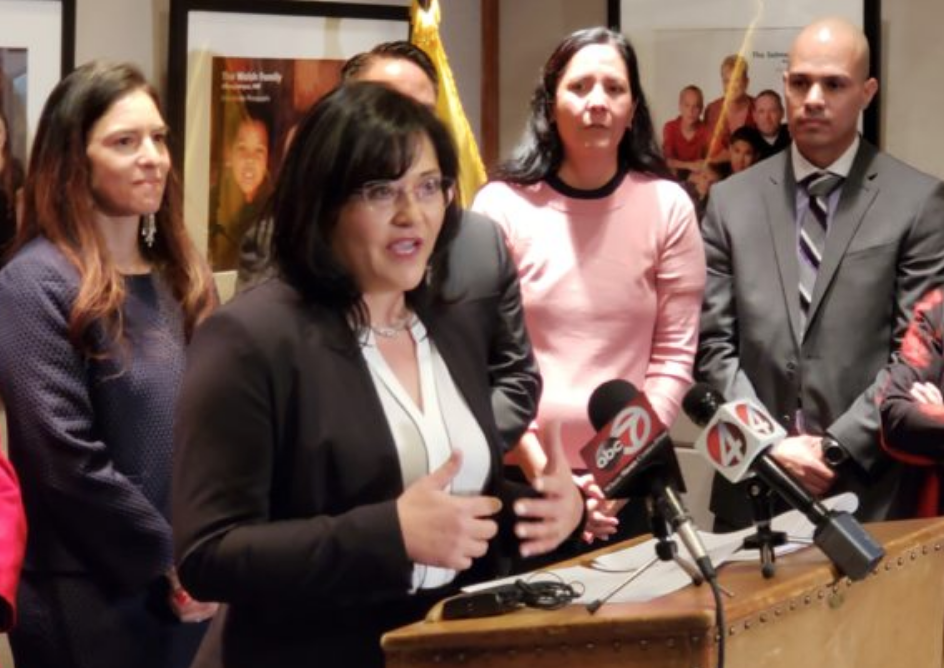 Gov. Michelle Lujan Grisham’s decision to fire Education Secretary Karen Trujillo on Monday took a lot of people in New Mexico by surprise, including Trujillo, who said she was blindsided.

It’s been three days, and some New Mexicans suspect they haven’t been given the real reason Trujillo was fired and why now.

The administration has said it was about her ability to communicate, manage and meet the governor’s expectations for transforming public education in New Mexico.

A spokesman initially pointed to the shaky rollout of a signature education program called K-5 Plus across the state, but the administration is beginning to walk back an effort to pin the firing on implementation of that program. Trujillo had pushed back, saying she didn’t get much direction from the governor and that she had raised alarm early on about how difficult K-5 Plus would be to implement immediately, as designed by the Legislature.

And Trujillo said if communication was deficient, it was on the part of the governor.

“It would have been nice to have a conversation with the governor where she said what her concerns were so that I could have done something about them, but that conversation never took place,” Trujillo said.

“This was not infrequent communication. These concerns were not new. Interventions failed, a change had to be made,” Stelnicki said.

The firing and the cause for it have devolved into a she said-she said situation, leaving many without a satisfactory answer for the governor’s action. In the balance hang the state’s children at a pivotal moment when a new administration is reshaping the contours of education in New Mexico.

The state continues to languish at 50th in education in the nation. It’s responding to a historic lawsuit that found New Mexico in violation of its Constitution for failing to properly educate Native Americas, English learners, low-income and disabled students.

Rocky implementation or lack of planning?

Earlier this week, Stelnicki said K-5 Plus’ rocky rollout was one of the inflection points in the governor’s decision to let Trujillo go.

K-5 Plus adds 25 days to the school year for kindergartners through fifth-graders at schools where there’s a large percentage of at-risk students, one measure being a high number of students who qualify for free or reduced-price lunch.

Media coverage has documented problems local school districts have had in participating in K-5 Plus. The state budget appropriated $120 million for K-5 Plus, but PED had spent less than $40 million for school districts across the state. There were other problems, too. NMID reported that teacher raises approved by New Mexico lawmakers ate up dollars that potentially could have gone for other programs.

But the difficulty in spending that full $120 million was known to state lawmakers and the governor’s office before the legislative session ended in March.

Trujillo said in her interview with NMID that her department, school districts and teacher’s unions had all warned legislators and the governor’s office beforehand that there was too little time and flexibility in the legislation to get the program up and running to full capacity this year.

One reason given is that the legislation mandated students keep the same teacher from K-5 Plus through the 2019-20 school year.

“By the time the law was signed, in (early) April, schools had one month to recruit teachers, recruit students, figure out transportation, do all of those things,” Trujillo said.

During the legislative session, in fact, an analyst for the Legislative Finance Committee said only half of what ultimately was passed by the Legislature for K-5 Plus, or $60 million, was expected to be spent. Others expressed in legislative hearings the need for more flexibility in implementing the program. Despite the warnings, the Legislature allocated $120 million for the program in the state budget that the governor signed.

“Teachers were already making plans,” Sen. Bill Soules, a teacher and Democratic lawmaker from Las Cruces, said. “Such a big change is always going to be difficult.”

Trujillo, a former teacher, principal and education researcher at New Mexico State, is well respected and has a deep knowledge of the problems bedeviling education in New Mexico. Before becoming secretary, she put out New Mexico State’s annual teacher vacancy report that explored reasons for that high vacancy rate.

But, Trujillo worked at the pleasure of the governor, meaning the governor could fire her for no reason at all. The timing is interesting, however.

The firing followed negative press coverage of education programs and a poll that found Lujan Grisham is among the least popular governors in the nation.

There was another recent, high-profile about-face from the Lujan Grisham administration after an agency’s action generated negative press.

After saying in late May that budget constraints were forcing the state to lower eligibility for child care assistance to 160% of the federal poverty level (FPL), the Children Youth and Families Department said it would take eligibility back up to 200% of FPL just days before a planned hearing on the change.

In an interview published by the Santa Fe New Mexican over the weekend, Lujan Grisham said she was trying to root out risk-aversion by state workers. As for getting the money to pay for child care assistance? They’d figure it out.

The decision on child care assistance, however, followed news coverage on the rollback, social media pressure from children and family advocates and Lujan Grisham’s address at the annual Kids Count conference, where New Mexico was once again listed as the worst in the nation in child well-being.

It raises the question of just how risk-averse Lujan Grisham is to criticism. Could it make other Cabinet members, deputies and potential secretaries leary of being the fall-guy for administration missteps? And how will Trujillo’s firing after just six months affect the search for the next education secretary?

The decision to reboot the leadership at PED pierces the balloon of excitement following the governor’s announcement of Trujillo and her deputies six months ago, when educators, advocates and lawmakers praised their diversity, status as New Mexicans with classroom experience and expertise in a range of subjects such as teacher development, student assessment, and bilingual and Indian education.

A change at the top usually means a change in direction, and the direction currently underway is one that has been popular with some in education circles and among parents. That includes the removal of the PARCC test, ending A-F school grading and plans to revamp the teacher evaluation system.

“Six months can’t be enough time to make this big of a decision. I’ve respected Karen for many years. Having someone at the head of PED with direct experience was so needed,” Rep. Rebecca Dow, R-Truth or Consequences said in a Facebook post. “(It) doesn’t seem realistic that her efforts have failed when not one single student outcome has been measured since she’s been in charge. The changes to measure just became law July 1st. School hasn’t even started.”

The New Mexico Center on Law and Poverty, attorneys for the Yazzie plaintiffs, had been meeting with PED about addressing the lawsuit going forward and have expressed confidence with the leadership team at PED. With a new judge overseeing the lawsuit and new leadership at the department, where the Education Department’s response to the Yazzie Martinez lawsuit heads is anyone’s guess. The Center declined an interview with NM In Depth about Trujillo’s firing.

Edward Tabet-Cubero, a member of the Transform Education New Mexico coalition that emerged from the Yazzie Martinez lawsuit, said he had advice for choosing the next leader at the Public Education Department.

“The message that is being perceived as coming from the governor’s office is really unsettling. And that’s that we have a New Mexican educator, who comes from our community, and it’s been stated that she’s unfit for the position so that the governor has to go out of state to look for someone,” he said. “We have plenty of qualified candidates from within state and many people would stand with me and say we need an education secretary from New Mexico.”