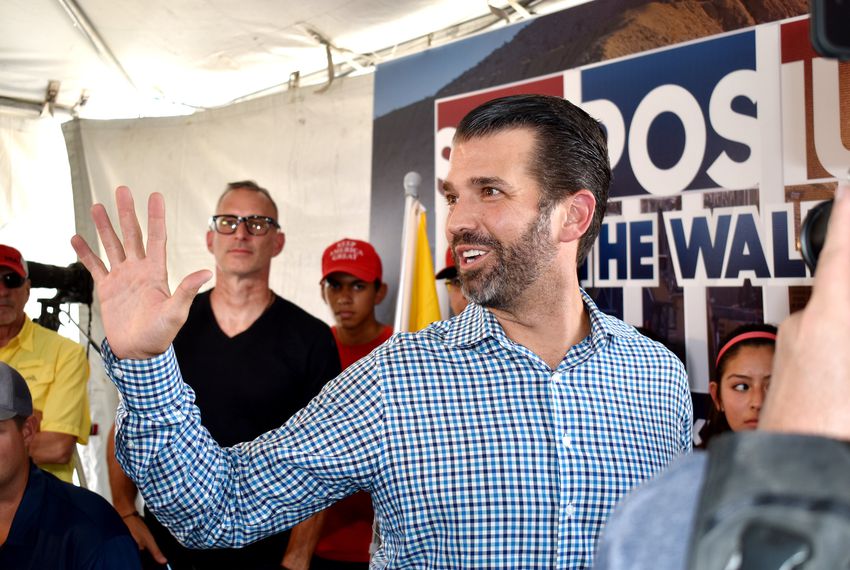 Donald Trump Jr. stopped by the Symposium by the Wall on Friday in Sunland Park, N.M.

SUNLAND PARK, N.M. – Donald Trump Jr. on Friday used every second of his brief visit to the border to defend his father and his administration, warn against the spread of socialism and alert a friendly Republican crowd that although his father’s reelection next year should be easy, it won’t be in the current political climate.

Trump Jr. was a special guest at an event dubbed the Symposium at the Wall: Cartels, Trafficking and Asylum. The three-day affair is put on by the same organizers behind We Build the Wall, the group that raised millions through a GoFundMe account to build a border barrier on the private land where the symposium took place.

“What you finally have now is a president who is willing to fight for Americans,” Trump Jr. told the crowd of about 100 people during a 13-minute speech. “ That was his mandate and that’s what he’s been doing. He’s the first politician, maybe in history, who’s taken hell for actually doing all the things he said he would do.”

“It was a coup. Anyone who watched on Tuesday can now realize that Robert Mueller was put in there as a figurehead,” he said. “He had no idea what was going on in his own investigation.”

Trump Jr. also threw in a couple jabs at the press, who he claimed was pushing the “great virtues of socialism and effectively, communism” and spent a few minutes warning against what he said was the rise of the two movements in America.

The event featured panel discussions on border security, immigration asylum and other issues, all held in an outdoor tent erected snug against the recently built border barrier. Behind the makeshift stage, organizers parked tractors used in the wall’s construction, near an armored vehicle where New Mexico state police stood guard. Near the tent, Benton Stevens, the 7-year-old from Austin who raised at least $22,000 for the border wall, set up shop and sold $10 cans of “Patriot Lemonade” and “Freedom Lemonade” — $2 for a glass and $10 for a larger container.

The symposium also featured former Kansas Secretary of State Kris Kobach and former Trump adviser Steve Bannon, both outspoken advocates of restricting immigration, who are listed on We Build The Wall’s website as part of its leadership team.

Before Trump Jr’s arrival, Bannon lauded the group’s ability to build the barrier on private land.

“If people came down here to the border and came down to El Paso and Sunland Park and saw this wall, immediately talked to the people [to] understand what the cartels have done … tried to criminalize Northern Mexico and prey upon the good citizens of Mexico, people would understand that every town in our country is a border town,” he said.

The event brought a rebuke from the campaign of former El Paso Congressman Beto O’Rourke, who is trying to become the Democratic nominee to challenge President Trump.

“The Symposium at the Wall is focused not on facts but on fear. A giant wall along our southern border will not make us more secure,” O’Rourke’s campaign said in a written statement. “Just as caging children and refugees and asylum seekers will never make us great.”

This article originally appeared in The Texas Tribune at https://www.texastribune.org/2019/07/26/donald-trump-jr-visits-private-border-wall-immigration-gathering/.