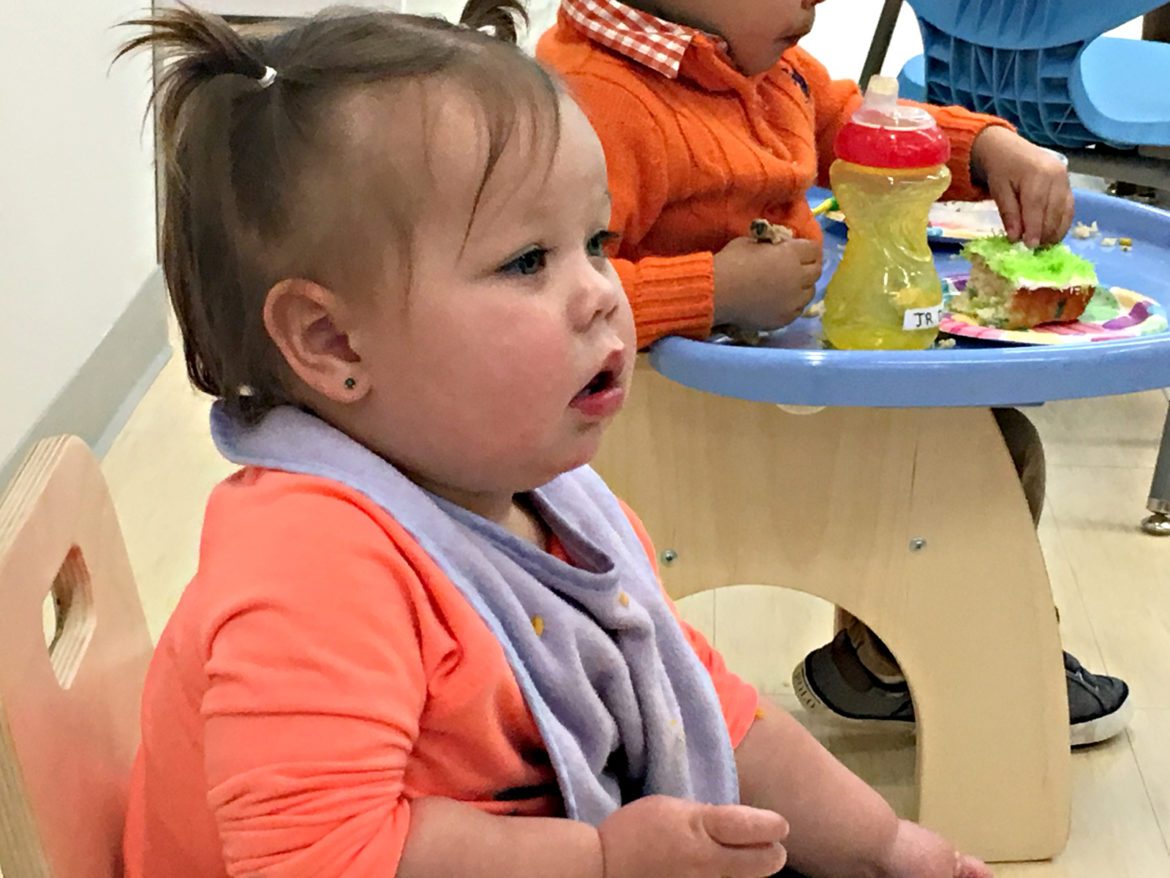 A toddler waits while her companions finish an Easter cake for students at Bright Beginnings Child Development Center in Jal, NM.

More New Mexico families will qualify for child care assistance without being wait-listed, and could stay longer on the program under proposed rules posted Monday by the Children Youth and Families Department.

Under current eligibility limits put in place in the wake of a lawsuit against CYFD, families can qualify and stay on the child care program if they make less than two times the federal poverty level, but not one dollar more. The proposal would take the exit point up to 250% of the poverty level.

To put the changes in perspective, a single mother with two children could make up to $42,660 per year and qualify, and could keep getting child care assistance with increasing co-pays until she earned $53,325. About 90 percent of child care assistance recipients are single-parent households.

“It’s just our new approach and our plan to make New Mexico a safe place to be a child,” Charlie Moore-Pabst, a spokesman for CYFD, told New Mexico in Depth.

He said widening the eligibility window will help low-income families keep their benefits as the state increases the minimum wage or be able to accept raises that might otherwise disqualify them from thousands of dollars in child care assistance.

“This is a huge (help) to working poor families, allowing them to come out of poverty and stay out of poverty, which is why that exit level is important,” he said.

Moore-Pabst said the department calculated it would cost nearly $10 million to serve an additional 1,436 children from Oct. 1 through the end of the fiscal year on June 30 if the rules are approved. He said CYFD had cobbled together enough money from its current budget to ensure it would not need to put any eligible family on a waiting list.

For the fiscal year that begins July 1, 2020, however, CYFD would likely ask the Legislature to appropriate $26.3 million to add 4,163 additional children. If demand was higher than it calculated however, the department would need to ask for supplemental money or use emergency procedures to reinstate a waiting list.

The proposed rules are in response to a lawsuit by OLÉ and the New Mexico Center on Law and Poverty that accused CYFD under then CYFD secretary Monique Jacobson of making rules without public input and for confusing and arbitrary decisions on eligibility for the program.

Attorney Sovereign Hager was pleased overall with the proposal, especially the expanded eligibility and a posted formula that lays out how CYFD determines eligibility and what parents pay in cost-sharing so that people can see whether co-pays are calculated correctly and they can appeal denials.

But even with the proposed changes, Hager said there is still work to be done to make child care in New Mexico affordable.

“What we see is that families end up paying upward of 10 to 15% of their income toward child care costs, even when they are getting assistance,” she said. “Families have been pretty clear that it’s too much. It’s one reason why only a third of eligible folk access the program as it is.”

That is certainly true of Helen Kennedy. She and her husband still won’t make the new cut off, but she feels passionate about the need for affordable child care.

“I think this is a good start and then we should build on it because child care should be accessible to everyone,” Kennedy said. “My husband and I are on the edge of middle class, but we’re never going to move beyond not-quite-middle-class. We still can’t quite make it.”

The Albuquerque mother works in retail and most of her paycheck goes toward child care for her nearly 2-year-old son and to provide health insurance for the family. The couple spends about 12% of their combined income on child care.

New Mexico Voices for Children, a nonprofit that has advocated for wider eligibility to ease the child care assistance “cliff effect,” also praised the proposal. It pushed a bill in the 2019 legislative session that would have taken the exit point to 300% of the federal poverty level.

There will be a public hearing on the proposed rules changes at 10 a.m. Aug. 30 at Apodaca Hall, 1120 Paseo de Peralta, Santa Fe. The public can comment online on the CYFD website here. Or email  CYFD-ECS-PublicComment@state.nm.us with the subject line “8.15.2 NMAC Public Comment.” The comment period ends at the conclusion of the hearing on Aug 30.