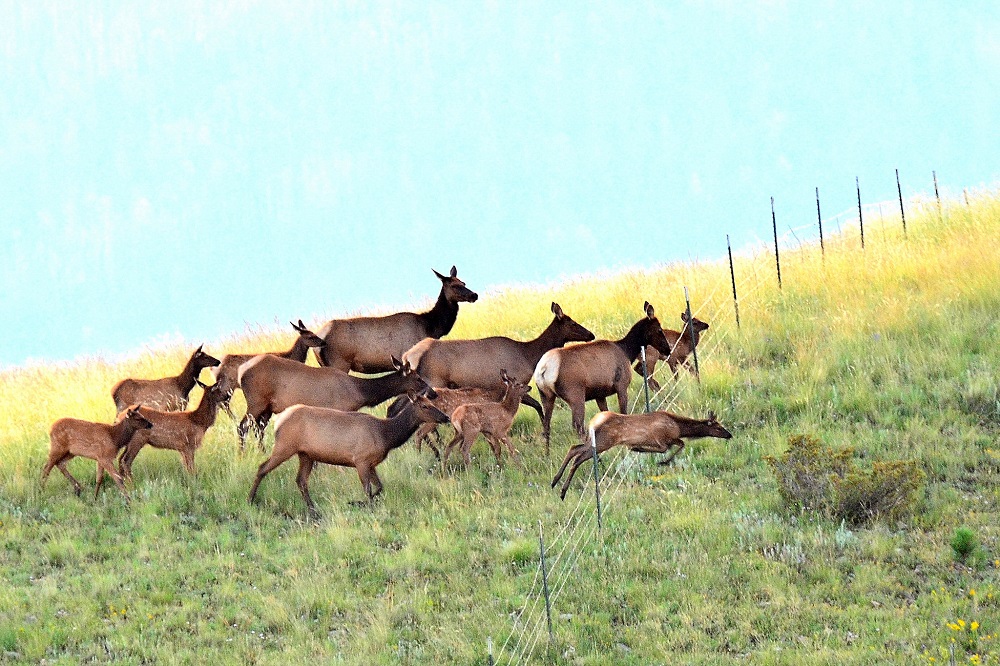 As the divisions of the United States have grown more complex over the years, lawmakers, regulators and landowners have been busy dividing up land. Railroads, highways, fencing and pipelines now stretch across thousands of miles of landscape; and borders have been established at every opportunity: national borders, state borders, jurisdictional borders and property lines. While these boundaries — both the physical boundaries and the more-or-less imaginary ones — have helped us organize and manage the resources of the land, they have severely impacted the wildlife we share space with.

Decades of research has shown wildlife corridors, which refer to the routes animals take when moving across a landscape, are an important part of species survival. But large contiguous plots of land are becoming increasingly rare as development pushes into new areas, and there’s a need to protect those corridors if we want to limit impacts to those species. That was one of the main takeaways from the Upper Rio Grande Wildlife Corridors Summit event held this week in Taos.

The summit, now in its third year, brought together diverse stakeholders in land management and wildlife conservation to discuss ways to help protect wildlife and habitat in the upper Rio Grande region amid increased activity and development.

The main challenge is that migratory corridors tend to cross borders and jurisdictions, while management plans historically have not. To protect wildlife corridors, collaboration is the name of the game.

In the spring of 2019, New Mexico became the first state to adopt a comprehensive, cross-jurisidiction program to identify wildlife corridors and establish plans to protect those corridors when Gov. Michelle Lujan Grisham signed the the Wildlife Corridors Act into law.

“The key provision is looking at wildlife corridors, working with the state department of transportation as well as Game and Fish, so we can identify priorities, and work with tribes and landowners to get everyone at the table so we can protect wildlife and protect folks traveling on the road,” said state Rep. Georgene Louis, D-Albuquerque, who was a House sponsor of the bill.

Louis added that establishing infrastructure for wildlife to use to cross highways and interstates not only protects the connectivity of the corridor, but it also helps prevent wildlife-vehicle collisions. “It’s a win-win,” she said.

“The overall purpose is to identify highway segments that pose a risk to the traveling public and those road segments that hinder wildlife movement and migration,” said Jim Hirsch, an environmental scientist with NMDOT.

Related: Safe Passage: Getting wildlife where they need to go

Hirsch said the state already has a wildlife-vehicle collision mitigation program. The department has completed 10 such projects since 2004. “Typically we install eight foot high woven wire fencing to keep wildlife off the roadway; and then we direct them to cross underneath existing drainage structures, such as bridges and concrete box culverts,” Hirsch said. “On occasion, we will actually expand existing drainage structures, or build new structures, to facilitate safe wildlife passage.”

The Wildlife Corridor Act will help the department expand its efforts, pulling in data and resources from the Department of Game and Fish and other state departments to supplement the work.

“We have a need to better understand how animals move across the landscape,” said Stewart Liley, wildlife management division chief at NMGFD. Liley said his department has been using GPS collars to track how wildlife move across the landscape, in collaboration with federal partners and the Jicarilla Apache tribe. More of this type of work is needed in order to gain a better understanding of how animals move within the corridors.

“I’m impressed with the amount of data that the forest service has on wildlife corridors, and I think it will really help us out in developing this action plan,” Hirsch said. “We’re just in the beginning stages of developing this plan, we’re currently reviewing proposals from various consultants. We hope to have a contract in place to start developing this plan in October.”

Much of the state’s big game species, such as elk, deer and bighorn sheep, move freely across Northern New Mexico and Southern Colorado, indicating a need for cross-state collaboration on identifying and protecting wildlife corridors jointly.

Synergies between Colorado’s new governor and Gov. Michelle Lujan Grisham have opened up new opportunities for the two states to work together to protect wildlife corridors that span the state line.

“Colorado is excited to partner with New Mexico to develop a united wildlife corridor strategy,” said Tim Mauck, deputy director of Colorado’s Department of Natural Resources. “We hope this is the first of many cross-state conversations with our friends here about protecting wildlife regionally.”

“With support from leadership in our respective states, we have great momentum,” he added.

U.S. Sen. Tom Udall is taking up the issue at the federal level. Udall introduced his Wildlife Corridors Conservation bill in May 2019 with bipartisan support, just after the U.N. released its dire biodiversity report that predicts 1 million species would become extinct by 2100 due to human impacts to landscapes.

“The bill would authorize federal agencies to designate wildlife corridors on federal lands to support the resiliency of fish, wildlife, and plants,” explained Caitlin Keating-Bitonti, who serves as the Congressional Science Fellow for Udall, and helped with the legislation. “It establishes a national coordination committee, bringing different federal agencies together and jurisdictions and stakeholders to the table when we think about planning where wildlife corridors are needed and where they’ll be best served.”

The bill would also establish $73 million in funding for regional projects to make conservation improvements to landscapes located on state, tribal and private lands.

But perhaps most importantly, the bill creates a federal wildlife database that policymakers and regulators could leverage in guiding land management and wildlife corridor programs.

“It’s a call to federal agencies and federal employees, to submit wildlife data to that database to help make those decisions,” Keating-Bitonti said. “In order to make excellent decisions about where wildlife will continue to thrive, we need the right data to do that.”

Correction: An earlier version of this story stated the Western Governors’ Association represented 11 states. In fact, it represents 19 states in the West. We regret the error.