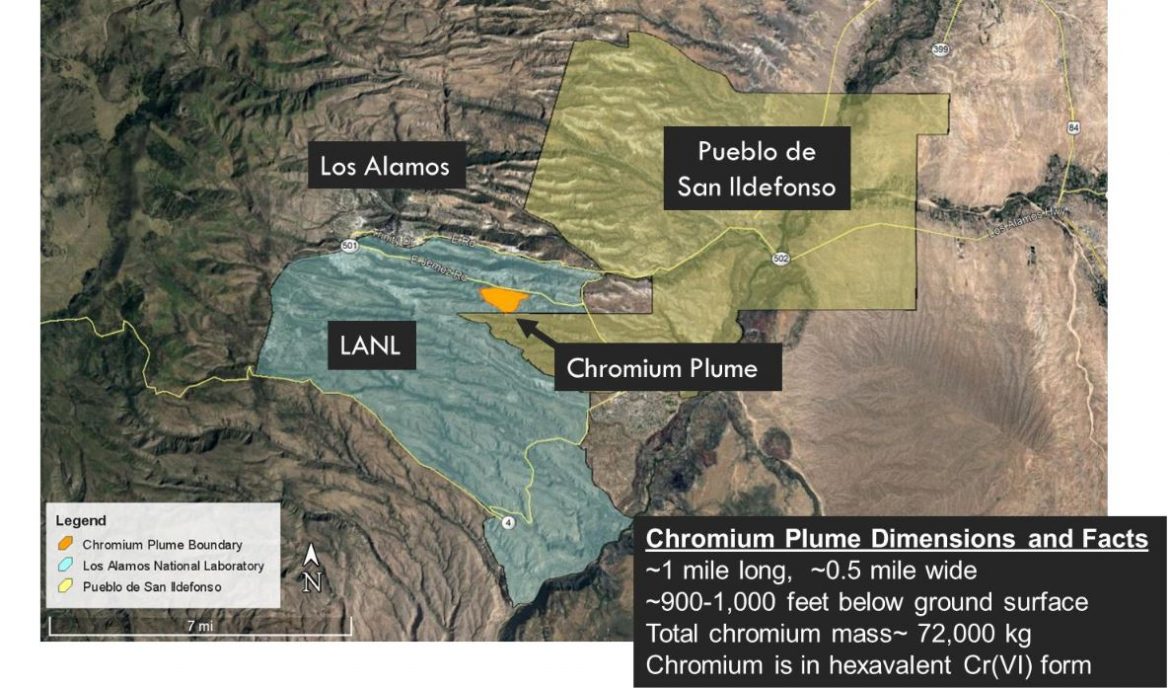 A map showing the estimated boundaries of the hexavalent chromium plume outside Los Alamos.

In the years between 1956 and 1972, thousands of kilograms of chemical called hexavalent chromium was released into a canyon near Los Alamos. Some of the contaminant filtered through the soils of the area and was consequently converted to trivalent chromium, a far less dangerous iteration of the chemical. But at least 2,000 kg of hexavalent chromium has remained in the environment, moving through the canyonlands that surround Los Alamos for decades. Today, the contamination is settled atop an aquifer in a plume, and the chemical is now present within the first 100 feet of the water table in the area of the plume.

The Department of Energy (DOE) and the New Mexico Environment Department (NMED) have been working to contain the plume since 2005, while officials decide on how best to clean up the contamination.

Chromium is the main additive to stainless steel, and gives the metal its anti-corrosive properties. Hexavalent chromium was used in power plant operations across the United States to prevent rust in decades past. Los Alamos National Laboratory (LANL) used the chemical to coat the inside of pipes at a power plant operation in what’s known as Technical Area 3, where it was dumped into the surrounding environment as part of a water discharge operation.

Dumping the chemical was “a normal practice throughout the country” at the time, according to Doug Hintze, manager of the DOE’s Environmental Management Los Alamos field office.

“You just released it into the environment,” he said. “In this case, it was released out into the canyons.”

Remediation of the contamination is slow work. Officials from the DOE, LANL and NMED have been working on the chromium plume for over fourteen years now. And, according to Hintze and Stringer, it will be at least another five years before the clean up effort will begin in earnest, when officials estimate a “final remedy” for the plume can be implemented — a full twenty years after the plume was first detected.

Hexavalent chromium is toxic and carcinogenic. It’s the contaminant that Erin Brokovich famously fought against in the early 1990s in Hinkley, California. In Los Alamos, the plume was first discovered in 2005, when the DOE installed 32 regional monitoring wells in the area. Understanding the size and scope of the plume has been a difficult task. NMED estimates the plume to be about a mile long and a half mile wide, sitting atop the regional aquifer approximately 1,000 feet below ground level.

But neither NMED nor DOE can know for certain where the exact boundaries of the plume lie underground, as indicated by the question marks in the map above.

To further complicate matters, the plume is not homogeneous, meaning it’s not one large entity, but rather is comprised of pockets of contamination.

“What we’re seeing is like three fingers,” Hintze said. “Instead of treating it as one homogeneous plume, wasting more time, money and effort, if we can concentrate on the fingers, then we can get those areas cleaned up. The more data we’re getting the more we’re seeing that it’s not homogenous.”

Officials are also not sure how the plume is moving underground. Recent testing has indicated, for example, that there is a concentration of chromium in the northeast corner of the plume, beyond the R-70 regional monitoring well, which was installed earlier this year.

“The sample was higher than we were expecting it to be,” Hintze said. “We used to draw this plume like a teardrop. When we got those samples, what that said was the plume has some sort of node, and that’s because of the geology and the way water flows.”

At present, the plume is estimated to be just a quarter mile from a Los Alamos County water supply well. But according to officials, the plume is moving so slowly that it does not present a threat to the county’s water supply.

“This plume is only moving maybe two or three inches a year. That may take 30 years to get a quarter of a mile,” Hintze said.

Since its detection in 2005, NMED and DOE have collaborated on remedying the contamination, but the pace of the clean up is painfully slow, while the plume itself has been slowly migrating southward and eastward.

The two departments implemented an interim measure last year to contain the plume and stop its spread. That’s done by extracting contaminated water through extraction wells located in areas with higher concentrations of hexavalent chromium, treating the water to remove the chemical, and then injecting the remediated water back into the aquifer through injection wells. The continuous operations have taken place along the southeastern boundary of the plume, where it pushes up against the boundary between LANL and San Ildefonso Pueblo.

So far, NMED has deemed the interim measure a success. The “pump and treat” system has successfully stopped the plume from moving southward or crossing over onto Pueblo land. Officials have yet to begin the process along the eastern boundary, where the new node was recently discovered. The project is awaiting approval from the Office of the State Engineer for one of the wells before the pump and treat process can begin.

In the meantime, NMED and the technical core team have asked for additional wells to be installed so that officials can gain a fuller picture of the extent and shape of the plume.

The DOE has already spent $90 million on monitoring wells and pump and treat wells. But Hintze emphasized the interim measure is just that: an interim solution aimed at containing the plume, not cleaning up the contamination.

“The thing with ‘pump and treats’ is that eventually, they’re a losing battle. You reach an area of diminishing returns. That’s why we have another campaign for the final remedy,” Hintze said.

“$90 million is nothing, because you spend what you need to do to make sure this is done correctly,” he added.

(Still) heading towards a final remedy

“We’re evaluating the remedial options and looking at what’s going to be our best choice to get the biggest bang for our buck and clean up the plume as quickly as possible,” Stringer said.

NMED doesn’t expect a decision on which solution to use until 2021, and the team won’t begin implementing the solution — which likely will take years to complete — until 2025.

“You hear this information and you don’t feel comforted. It’s real frustrating to hear about something in 2005, it’s 2019, and we’re still talking about interim measures,” she said at the meeting. “I’m a little disappointed in terms of how responsive the federal government has been on this issue. Personally, I’d like to see a final solution before 2025. I’m probably going to be dead before we have a final [remedy].”

“We do feel that we have lost some time over the past few years because of the reductions in resources at both the federal and the state level. It’s been debilitating,” Stringer said in response to Chandler’s comments. “The [NMED] Secretary [James Kenney] is definitely interested in increasing resources for all these high-priority sites. Given the current resources that we have, it doesn’t happen immediately. But that is a goal and direction that the department is moving in.”