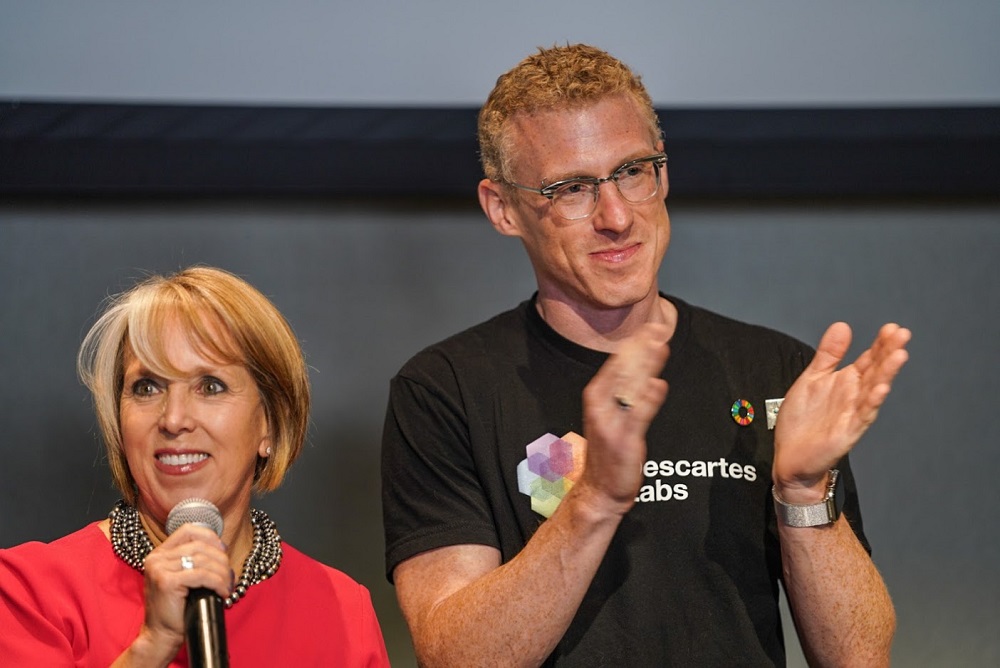 The state is partnering with a New Mexico-based geospatial analytics company to launch a “data refinery” to track methane emissions using satellite data. Gov. Michelle Lujan Grisham announced the partnership at an energy and sustainability-focused summit held in Santa Fe on Thursday, touting that New Mexico will become the first state to use such data to inform methane regulations.

Methane is the primary component of natural gas extracted in New Mexico and is a valuable revenue-generating resource for the state. But methane is also a powerful greenhouse gas, and reeling in methane emissions has become a priority for Lujan Grisham, as she balances the economic benefits of a booming oil and gas sector in the state with her administration’s goals of reducing carbon emissions and increasing the use of renewable energy.

The state hopes to find out how much methane is being released into the atmosphere through the newly-announced partnership with Descartes Labs. The company will use data collected from satellites, drones, planes and ground sensors to detect and track methane emissions in the state. The database will be fully accessible by the public.

“We will be the first place in the country to both have access to data that’s meaningful for us to do something about reducing methane emissions, and be very clear about what we’re doing, where we’re doing it, and what’s happening as a result,” Lujan Grisham said at the summit. “It also means that we’ll close the gap in data that we do not have.”

“It’s very important that we be accountable, it’s important that you know what that accountability is going to look like,” she added. “For the public to have trust that we are doing all of this work productively, and that this really is a public-private partnership as we move forward — that is incredibly powerful. This is a huge step forward to getting that done, in one of the most difficult technical spaces.”

RELATED: While state grapples with new methane rules, EPA wants to end some methane emissions limits all together

The governor announced earlier this year that her administration would tighten greenhouse gas emission regulations, including methane emissions. Officials from the New Mexico Environment Department (NMED) and Energy, Minerals and Natural Resources Department (EMNRD) held a series of public meetings earlier this year to hear from residents in oil and gas communities as the state agencies begin drafting potentially tougher regulations.

Tracking methane emissions is more difficult than other greenhouse gases, in part because federal regulations only require oil and gas producers to report how much methane they sell, not the total amount of methane extracted. That means much of the so-called fugitive emissions — methane that escapes in the extraction process of oil and gas development — isn’t reported.

Descartes Labs will first focus on documenting methane emissions in the New Mexico portion of the Permian Basin, which is currently the highest producing oilfield in the world. The company will later expand its model to include other parts of the state, such as the Four Corners area, where a methane “hotspot” was detected by the National Oceanic and Atmospheric Administration (NOAA) in 2014.

State inspectors will lean on the methane-tracking data to find “potential problem areas on a near-real-time basis,” the company said.