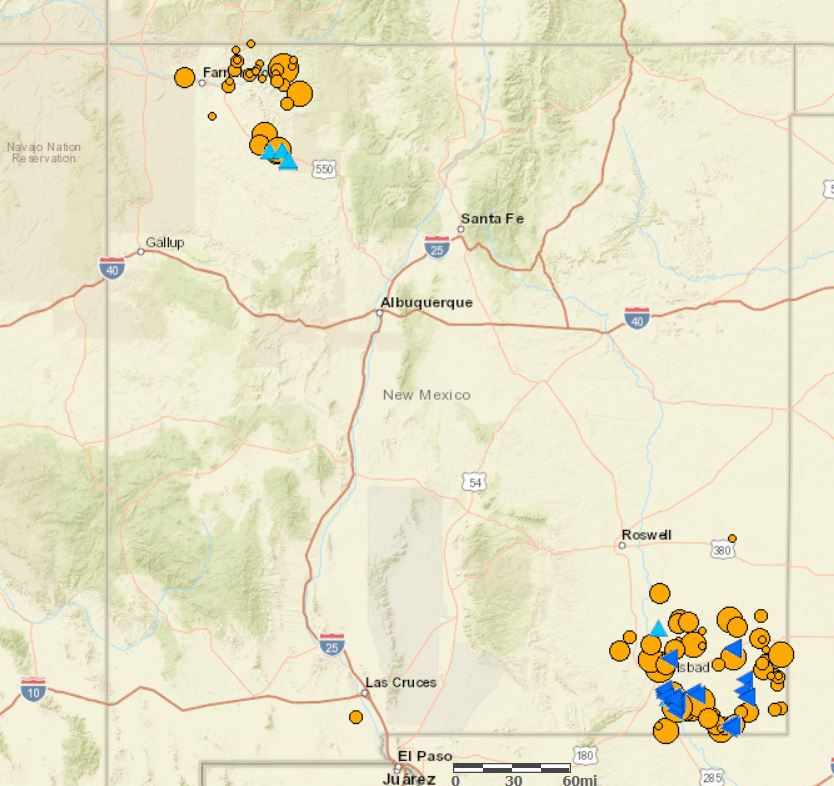 NMED is sending written notices to oil and gas operators about the emissions. Oil and gas producers will have 14 days to correct the issues. If those issues are not corrected within that time frame, NMED said it may launch an investigation or initiate civil enforcement of the violations, which could include assessing monetary penalties to producers who are in violation.

During two flyover compliance inspections in September and October 2019, officials identified and documented emissions leaks from flares, tanks and other types of oil and gas equipment. Officials found 111 of over 5,300 storage tanks were emitting methane and other pollutants, and 13 of the 530 flares observed were unlit and emitting methane.

NMED said the department is now reviewing that footage to determine if any violations had taken place.

“The Department is addressing oil and natural gas emissions through innovative compliance assurance measures today as we invest in methane regulations for tomorrow,” said NMED Cabinet Secretary James Kenney in a statement. “The emissions documented in many of these videos are unacceptable to this Department and pose significant health and safety risks to New Mexico communities and employees of these companies.”

Earthworks’ Colorado and New Mexico field advocate Nathalie Eddy said NMED’s notices “suggest that New Mexico is putting the public interest ahead of — or at least on equal footing with — the oil and gas industry’s pursuit of profits.”

“NMED’s enforcement letters recognize that New Mexicans living with oil and gas production — involuntarily and continuously monitoring it — are important allies in protecting their own health & environment from oil and gas pollution,” Eddy said. “Today’s news is a concrete validation that community and community-advocate complaints are a vital tool to reign in dangerous oil and gas pollution.”

The New Mexico Oil and Gas Association (NMOGA) is supportive of NMED’s efforts to enforce emissions compliance among oil and gas producers.

“We are constantly working to reduce our emissions and environmental impacts, and data collected by the EPA shows that we’re making progress while continuing to produce more oil and natural gas,” NMOGA spokesperson Robert McEntyre told NM Political Report in an email. “While operators strive to fully comply with the law, we respect the role NMED plays to ensure a fair and level playing field for the industry.”