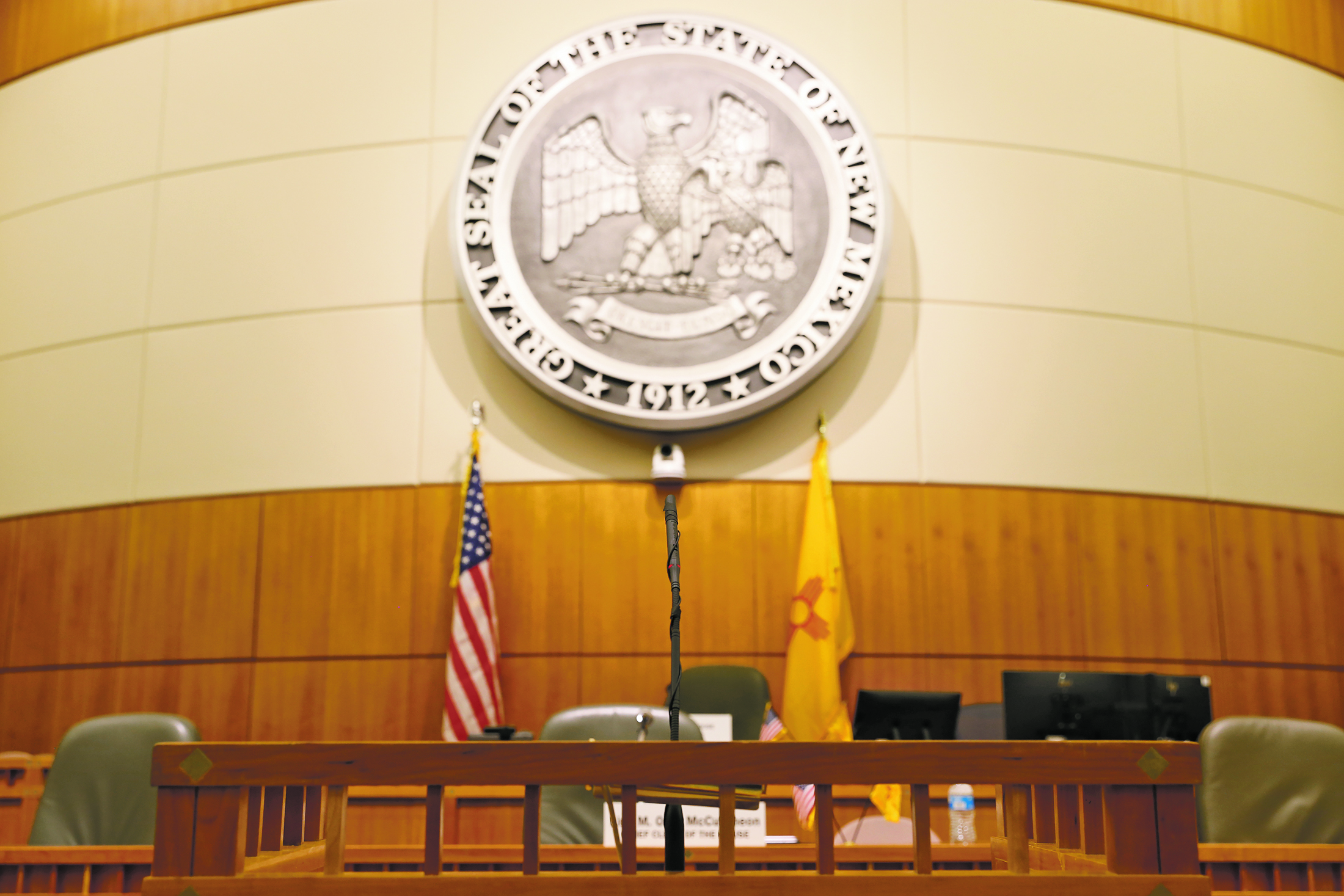 Governor Michelle Lujan Grisham’s podium where she will address the State, officially starting the 2020 Legislative session on Monday January 20, 2020.

On the roughly eight-hour flight from Chicago to Dublin, Ireland, Gov. Michelle Lujan Grisham’s speechwriter and top communications staffer started a draft of what will be her second annual address to the Legislature.

Six hours and 6,000 words later, Tripp Stelnicki closed his laptop and braced himself to meet his sister’s fiancé in Ireland.

Since then, Stelnicki said, the document has run the gauntlet, viewed and honed by the governor’s chief of staff, John Bingaman, senior adviser Dominic Gabello and the governor herself. She made some suggestions — a joke here, a little more emphasis here, a cut there. Over time, 2,000 words were shaved off and Lujan Grisham has gone through a dry run of the address, with microphones on, in the House chamber. Closed captions have been sent to PBS for the telecast of the address.

Lujan Grisham will deliver her second State of the State address Tuesday at about 12:30 p.m. in the House chamber, with lawmakers, lobbyists, journalists and the general public tuning in to hear her recount accomplishments during her first year in office and describe her political vision for the next year.

Unlike her first State of the State Address, a speech about what was to come, Tuesday will be an opportunity for the Democratic governor to add detail and texture to a vision she wants to forge for New Mexico with the help of lawmakers in the Legislature during the 30-day budget session.

“I write it, but that is kind of the last step,” said Stelnicki, the governor’s communications director and a former newspaper reporter for The New Mexican.

The speech, he added, is a summation of what has been done and where the state is headed under Lujan Grisham’s leadership.

Stelnicki said staff members do not meet, brainstorm and decide collectively what goes into the state of the state speech. Instead, the governor entrusts him to accentuate the priorities she wants highlighted: More education funding, economic priorities, health, the environment, public safety.

A crucial part of Stelnicki’s job is being part of routine conversations with the governor and her top staff, including cabinet secretaries, on what her administration is doing. Those interactions are eventually wrapped into the address.

“I sit down at my computer and bang it out,” Stelnicki said. “But with a significant one like this, the things that go into that are basically the entire course of the year has been preparation and input into … my ultimately sitting down at the computer and writing a first draft.”

On Tuesday, Lujan Grisham will make the case for the litany of legislative priorities that have made the call — the list of nonbudget policy items the governor has deemed relevant to the 30-day session this year. That includes legalizing adult-use cannabis; a bill to allow law enforcement to obtain a court order to remove guns from people who are considered dangerous; a proposal to offer a scholarship that would cover college tuition; a solar tax credit renewal and a host of other proposals.

Lujan Grisham also will likely touch on her proposal to boost K-12 education funding by $200.3 million and create an additional $320 million one-time appropriation to an Early Childhood Trust Fund. Taken together, it is more than the $500 million in additional education funding she called for during her first State of the State address last January.

Though State of the State speeches sometimes escape the notice of many, they remain a big deal to politicians and those who work for them.

“I think that governors work really hard on the state of the state speech,” said Brian Sanderoff, president of Albuquerque-based Research and Polling, Inc. “I think it’s their one opportunity to hold the Legislature captive to hear her short- and mid-term agenda [and] set a tone.”

This year’s address likely will feature a heavy emphasis on the budget — not surprising given the 30-day session is dedicated to the subject. She’s calling for an 8.4 percent increase to $7.68 billion for fiscal year 2021, while the Legislative Finance Committee recommends a 6.5 percent increase to $7.54 billion. Either plan would give New Mexico its second straight year of major budget increases fueled by unprecedented oil production in the southeast corner of the state.

Stelnicki said the address is aimed for a wide audience, not merely those who will be in the House chamber Tuesday afternoon.

“It’s definitely a speech for New Mexicans first and foremost, legislators included, and everybody who works here at the Capitol,” he said. “That’s all one group that it’s aimed it. It doesn’t matter, there’s no distinction really if you’re a House representative from one part of the state or another or just someone who’s tuning in to see it. We would want the message to be the same. The goal is to be an all-encompassing speech.”