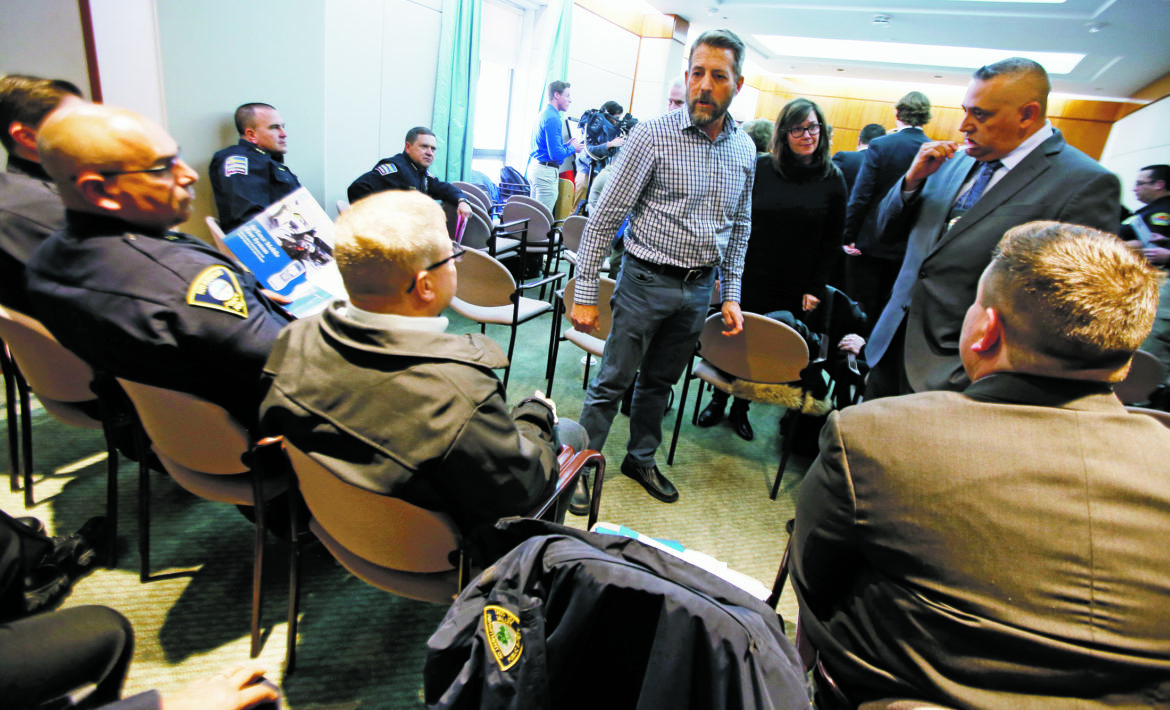 Lt. Enrique Salas, right, with the town of Mesilla Marshal’s Department, swabs his mouth for a test while Mike Tickle, center, with Intoximeters, the distributor for SoToxa, demos the device in front of officers at the state capitol on Thursday, February 6, 2020. The device can detect recent use of amphetamines, benzodiazepines, cannabis, cocaine, methamphetamine and opiates.

A co-sponsor of a bill that would legalize the use of recreational cannabis said he he thinks it only has a “one in three” chance of becoming law this year.

The bill cleared its first hurdle in late January when the Senate Public Affairs Committee voted 4-3 along party lines to advance it.  Since then, Ortiz y Pino said he and the bill’s other sponsors have been meeting with supporters as well as opponents to make it more palatable.

As such, even if it becomes law, the start date for the recreational cannabis program has been pushed back from 2021 to 2022.

But Ortiz y Pino acknowledged it may take another year or two to get recreational cannabis through the Legislature — in part because time is running out on this year’s 30-day session, and the bill still must go through multiple committees. The session ends at noon Feb. 20.

“It’s going to be very tough to get this through as late in the session as it is,” he said.

He said the bill, co-sponsored by Sen. Jacob Candelaria, D-Albuquerque, may have a better shot of success during next year’s 60-day legislative session.

“We’re trying to work out some of the issues that may be objectionable in the bill, educate legislators about it and give the public a chance to tell legislators what they think,” Ortiz y Pino said. “So if it doesn’t get through this year, our chances are greatly enhanced next year.”

“Being this is a 30-day session, we knew it was a tough road anyway,” Martinez said. “But the next session, the 60-day session, I think the wind will be at our backs.”

For now, that wind may be blowing back against the bill. Sen Joe Cervantes, D-Las Cruces and chair of the Senate Judiciary Committee, has voiced concerns in the past about legalizing marijuana use.

Sen. Peter Wirth, D-Santa Fe and a member of the judiciary committee, said Sunday the sprawling bill is undergoing “a whole string of amendments” that will be discussed at Wednesday’s hearing.

Ortiz y Pino said one of the changes to the bill is that it will no longer give medical marijuana producers who are growing cannabis a one-year head start on those who would have to start a new recreational cannabis production initiative from scratch. New Mexico legalized medical marijuana in 2007.

“I’m supportive of the concept, but if we are going to do this, we need to get it right,” Wirth said. “Judiciary is going to be an important hearing because this is a committee that will provide scrutiny to the bill.”

The bill would impose a 9 percent tax on cannabis sales and create a regulatory advisory committee to help create rules for implementing the program.

The implementation plan includes coming up with a measure for police to conduct an oral fluid test on motorists to see whether they are driving under the influence of cannabis and for police to compile an annual report on the number of arrests, citations and other violations tied to those using the drug.

Opponents, including Republicans and conservative Democrats in the Senate, worry the bill could lead to more addiction in a state overrun by drug and alcohol abuse and related crime rates.

Wirth said he couldn’t predict how Wednesday’s hearing will turn out.

“Whether the votes are there to move it out, we’ll have to wait and see,” he said.

Wirth said the fact Cervantes hasn’t come out in support of the bill “makes it challenging. I think he’s going to want to work on the language and see if what is being proposed makes sense.”

Cervantes did not return a call Sunday afternoon seeking comment.

Even if the bill makes it past the Judiciary Committee, its odds may not get better in the Senate Finance Committee, headed by Sen. John Arthur Smith, D-Deming.

“My guess right now, assuming the Rs [Republicans] stick together, and given a couple of Ds [Democrats] have in the past voted against it, that it’s gonna be a tough hill to climb if it gets out of Judiciary,” Smith said Sunday.

A similar bill narrowly made its way through the House of Representatives on a 36-34 vote last year before it quietly died on the Senate side.