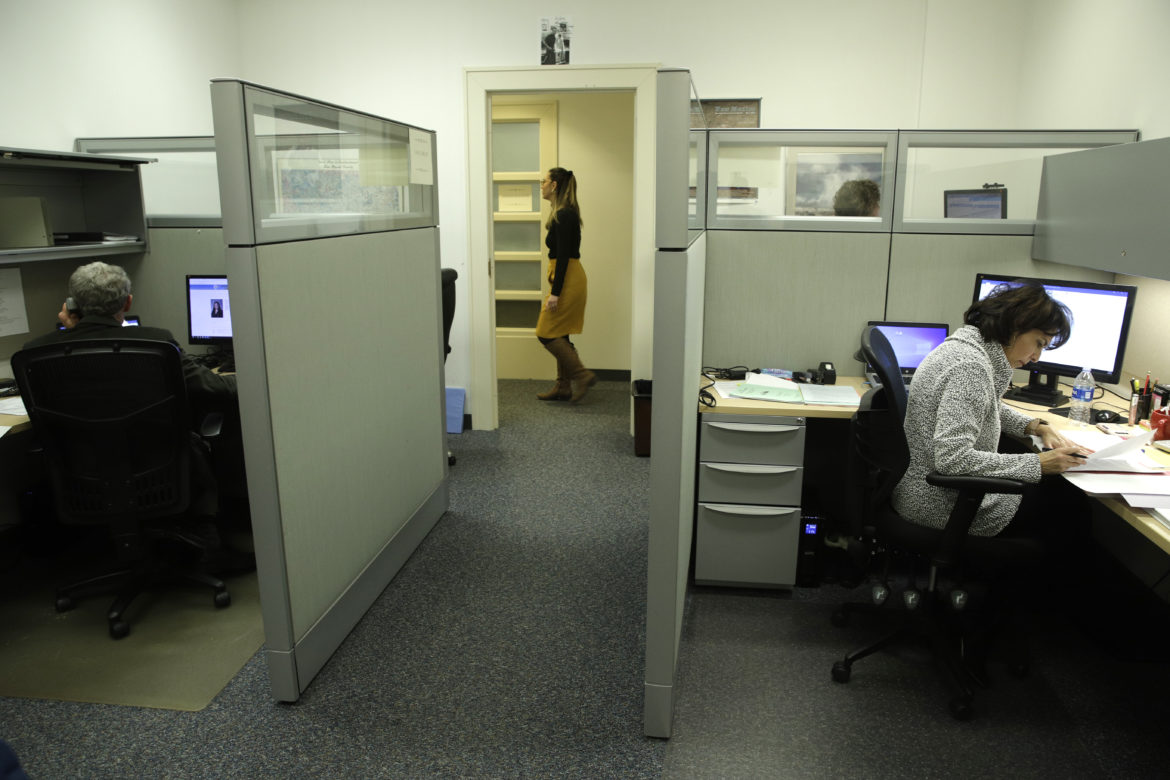 Right,Cathy Fernandez, the quality control FIR Manager for the Legislative Finance Committee, examines and edits proposed bills and budgets for fiscal accuracy at her office in the Capitol North on Tuesday February 11, 2020.

It was late Tuesday morning, a House committee was set to hear the high-profile “red flag” gun bill in just a couple hours, and a key report — one that was needed for the hearing to begin — wasn’t ready yet.

One building over from the Roundhouse, the pressure was on as Cathy Fernandez and her analysts waited for input from a state agency in order to complete the report for Senate Bill 5 and send it over to the House.

To make matters even more difficult, it was a snow day and the rest of state government was closed.

Now, multiply that experience to the nth degree. That’s about what it’s like to be a Legislative Finance Committee contract analyst tasked with writing the “fiscal impact reports” required for every piece of legislation filed during the session. It’s long hours, tedious work, and an unrelenting list of bills to analyze — with deadlines that become even tighter in the final days of the session.

“It’s like being in a pressure cooker in here,” said Fernandez, who oversees the contract analysts and previously was deputy director of the LFC. “You have 10 fastballs coming at you.”

The office where Fernandez and her team slave away is referred to as the “bullpen.” Others call it a “boiler room.” And one analyst even refers to himself as a “FIRster,” a play on the acronym for the reports they generate.

The people here, most with years and years of experience, could also be called the Truth Squad. Their numbers often are the crucible for whether a bill will fly financially, which is the first — and perhaps, most important — step to flying politically.

“They’re unsung heroes in this process,” Legislative Finance Committee Director David Abbey said of the people in the boiler room.

While fiscal impact reports aren’t the centerpiece of news stories or news conferences, all germane bills in a 30-day session — regardless of whether they’re marquee initiatives backed by the governor or obscure pieces of legislation few have heard of — must be accompanied by them.

The reports lay out how bills will affect state government finances so legislators can evaluate the costs, savings and revenues they might create, and whether they’re feasible should they become law. In other words, they can shape the success of failure of a bill. Committee chairs usually will not hear legislation unless the FIR is submitted, and lawmakers often reference them during debate.

As Abbey spoke in his office, an analyst came in and said legislators were rethinking whether a specific piece of legislation was actually affordable — because of the analysis in the FIR.

On Wednesday, one of those reports became a key component during a committee debate on an amended version of Gov. Michelle Lujan Grisham’s proposal to provide free college tuition to all New Mexicans. While the Higher Education Department estimated the revised Opportunity Scholarship proposal would cost $45 million per year, the fiscal impact report put that number much higher, at $62 million. Legislators used the report to express their concerns.

Fernandez and most of her analysts are already retired from long, often prestigious careers as specialists in state government, universities or the private sector, and are contracted to work only during the session. Yet on a recent day, no one was taking it easy.

One analyst flew by to tell Fernandez she was almost done changing the language on one report, and came back minutes later to give another update. Meanwhile, large stacks of pink-covered reports were piling up on Fernandez’s desk, waiting for quality control.

Aides briskly entered the room to give analysts blue slips assigning them urgently to new bills. In a copy room down the hall, assistants furiously printed out stacks of reports to be delivered to committees.

“It’s much more challenging than I thought it was going to be,” said Betsy Glenn, a contract analyst who previously was New Mexico’s chief deputy attorney general and Chief Legal Counsel at the Department of Taxation and Revenue. “It’s pretty much nonstop.”

The pace also was frenetic for staffers employed at the Legislative Finance Committee all year round. They not only write FIRs but also help craft the main budget bill, attend committee hearings, fulfill legislators’ requests and do other special projects.

In a nearby office, one analyst found solace with a colleague and a bag of Cheez-Its. She had been staring at a computer screen for hours and said delirium had set in. She just couldn’t think anymore. Yet five minutes later, she snapped back to it and headed to her office for more.

A bulletin board reveals upcoming committee schedules — displaying dozens, maybe even hundreds of bills waiting to be heard. Analysts highlight each bill yellow when its corresponding FIR is complete. On one recent afternoon, most of the bills for the following day were already marked, but not all.

“It’s like a big ship, steering it in the right direction,” Fernandez said of her role in coordinating the analysts.

There’s a sense the analysts’ work isn’t always fully appreciated by some in the Roundhouse. Analysts said some legislators and committee staff assume the reports should be ready at a moment’s notice, not always taking into account the extensive and highly specialized work that’s required.

“There’s kind of misperception that there are people here who work 24-7 and that’s not the case,” Fernandez said. “We do need to sleep and eat.

“A bill would be introduced and a day later we’d get a call, ‘Where’s the FIR?’” she added.

Occasionally, the work goes unnoticed upstairs: Legislators and even sponsors of legislation may ask questions during hearings that are clearly answered in the reports — quietly irking analysts because it suggests the lawmakers haven’t fully read the reports.

“People don’t recognize the quality and hard work,” Abbey said. “They are worthy of more recognition.”

For the most part, lawmakers say they do appreciate the hard work analysts put in, noting a report’s insights can help make legislation better. But there is grumbling on their side as well, especially when legislators feel a report paints their bills in a negative light. That provides fodder for opponents to pick apart their proposals in committee debates.

“It’s super important. The FIR can make or break a bill,” said Rep. Jason Harper, R-Rio Rancho. “The feeling among most legislators is that FIRs are not neutral — there’s a certain perspective to it. If that perspective is not positive, it can kill a bill.”

Analysts say a main goal is to make their reports as objective as possible. And while mistakes are sometimes made, the people in the boiler room/bullpen say they do their best to be accurate. They undergo rigorous training, as do employees in state departments who are counted on to provide input on fiscal impact.

The part-time analysts receive less pay than they made in their careers, but they say remuneration isn’t why they’re here. Theydeclined to say how much they earned, but said it was an hourly rate.

“You don’t hang out this long if you don’t love it,” said Laird Graeser, the contract analyst who calls himself a “FIRster” and who was formerly the chief economist at the Taxation and Revenue Department for 15 years. “If you do it right, you make the lives of New Mexicans better.”