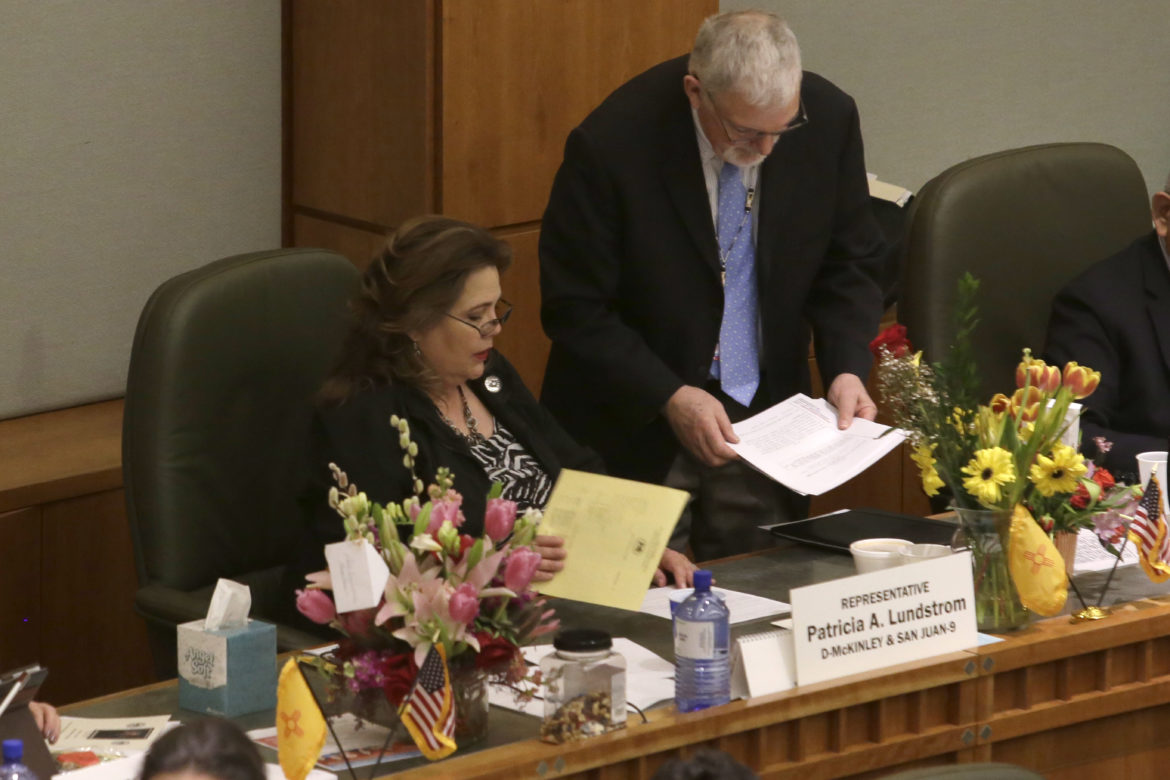 Representative Patricia A. Lundstrom - (D) during the house session on Friday February 14, 2020.

If legislation had taglines, this one’s might be: “How a highly technical bill became the latest partisan punching bag.”

On Friday, the Democrat-controlled House Taxation and Revenue Committee approved House Bill 341, which proposes to transfer money from the state’s enormous Tax Stabilization Reserve fund into its operating reserve if the latter drops to less than 1 percent of total appropriations.

The legislation’s proponents say the measure would fix a structural issue created when the rainy-day fund was set up, and would even help the state avoid calling a special session when it’s not necessary. But it became a flashpoint for discord Friday, with Republicans critics contending the bill is a cover for Democrats spending too much during the session.

“If we refuse to address the technical problem that has arisen, we’re not doing our job,” House Speaker Brian Egolf said Friday at the committee hearing before voting in favor of the bill.

At issue is the balance in the state’s operating reserve, a sort of holding account for the general fund that provides a buffer in case there’s a revenue shortfall.

That’s a dangerously low level, proponents say — noting it wouldn’t be enough if state revenue fails to meet projections, or unexpected funding is needed for disasters or other emergencies.

Enter the Tax Stabilization Reserve. There’s plenty of money in that coffer, which will balloon to an estimated $1.6 billion by next fiscal year. But as a rainy-day fund, it is by law very difficult to access. To tap it requires the governor to declare an appropriation necessary “for the public peace, health and safety” and both houses of the Legislature to approve the move with a two-thirds majority.

“Low balances in the operating reserve run the risk of insufficient funding to cover emergencies and disaster allotments, in which case a special session may be necessary to appropriate such funding from other sources,” the bill’s fiscal impact report says.

Sponsors, including Rep. Patricia Lundstrom, D-Gallup, are proposing a fix.

Under their proposal, if the operating reserve declines to below 1 percent of total appropriations for a given year — around $80 million for the current year — then enough money would be transferred from the Tax Stabilization Reserve to get operating reserves up to the 1 percent level at the end of the fiscal year.

“I can see why this is smart,” Rep. Javier Martinez, D-Albuquerque and co-chair of the House tax panel, said during the hearing. “I think it’s fiscally prudent and sets us on a positive path.”

But like many budgetary matters in this session, the bill didn’t get out of its first committee without becoming a political lightning rod. It was approved 8-4 along party lines.

Republican members charged Democrats were using the proposal as an excuse to overspend. They said if the state wants more money in the operating reserve, the majority party just shouldn’t spend as much.

“I’m a little frustrated,” James Strickler, R-Farmington, said during the hearing. “We just need to shave 1 percent off our very generous budget and we won’t need to do this.”

House Minority Whip Rod Montoya said Democrats were advocating for the measure in a bid to “avoid the embarrassment” of potentially having to call a special session during an election year.

“We just have a spending problem,” said Montoya, R-Farmington. “This bill puts the cherry on top of the cake.”

Yet Sen. John Arthur Smith, a fiscally conservative Democrat and chair of the Senate Finance Committee, backed that Republican claim on Thursday, saying the main budget bill passed by the House didn’t take into account capital outlay requests and other proposed expenses and would therefore miss the reserves target by some $150 million to $200 million.

Democrats in the House tax committee countered the Republican opposition to HB 341 on Friday, with Egolf calling it “political rhetoric.”

“It is not an issue of overspending, and every time that is said it is simply false,” said Egolf, D-Santa Fe.

Martinez agreed. “I disagree with the notion that this is some ploy to plug a hole created by overspending,” he said.