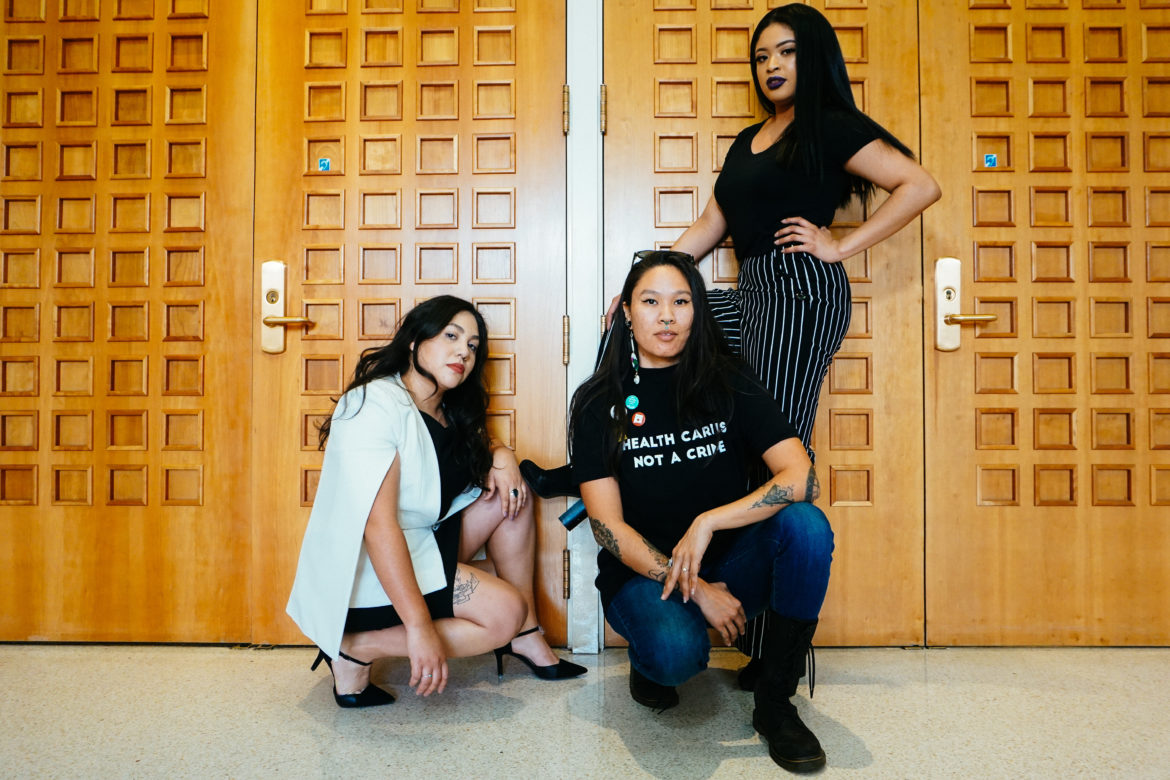 An Albuquerque film screening that served as a fundraiser for Indigenous Women Rising raised $300 late last month. The money goes to support an abortion fund for Native people in the U.S. and Canada. Since the beginning of this year alone, the IWR abortion fund has helped 18 people get an abortion. The fund can help with the cost of the abortion itself. IWR’s abortion fund also helps with other practical support such as gas, food and childcare expenses related to an abortion.

But Rachel Lorenzo, co-founder of IWR and who is of Laguna Pueblo and Mescalero Apache, said that in addition to raising money, the organization’s staff wanted to raise consciousness by getting new people, especially white people, to the IWR event because abortion care is “more nuanced for Native people.”

“Join us in dismantling those barriers,” Lorenzo said.

Although health care is a Native American right through treaties with the federal government, the National Congress of American Indians reported that in fiscal year 2017, the Indian Health Service spent $3,332 per capita expenditures for patient health services while national spending on healthcare is $9,207 per person.

The Hyde Amendment, a legislative provision that has been reenacted every year since the 1970s, prevents the use of federal dollars for abortion except in instances of rape, incest or to save the life of the mother. Because of it, Indian Health Service cannot provide abortions for Indigenous people.

Much of the state’s reservation land is far from New Mexico’s major cities where the few abortion clinics exist, further complicating abortion care when time matters.

“The abortion debate isn’t just about Roe v. Wade. We want people to understand that the big thing is Roe already hasn’t fulfilled its promise to Native people,” Lorenzo said.

But, Lorenzo said Indigenous people have “helped each other” during labor and birth and that abortions are not new to Native Americans.

“We’ve been having abortions since time immemorial, because of drought, food shortage, we were raiding or migrating, or the weather was harsh,” Lorenzo said. “We have always managed fertility, whether using teas or roots to induce a period.”

Though there are other abortion funds, this is the only one specifically for Native people, Lorenzo said.

“There are a lot of considerations people have to make about jobs; they may be taking care of children or elderly parents; they may already be barely able to get to work and worrying about how to put gas in the car,” Lorenzo said.

Economic costs are further magnified because Native American women make, on average, 58 cents for every dollar a white male makes.

Lorenzo said most of those who call IWR live outside of the state. Lorenzo said that having to travel long distances for abortion care is not new for Indigenous people.

“They’re (the calls are) starting to come from Florida, Wisconsin, the Dakotas, California,” Lorenzo said. “Some callers might be traveling to California for abortion care. They might live in Washington or Oregon; they might be in school; it might make sense for them to leave home for privacy or safety. We’re starting to get more callers in Georgia.”

Lorenzo said IWR staff hear from Native people who have to go to extreme measures – sleeping in a car because of mandatory 72-hour waiting period laws in some states or due to a necessary judicial bypass that are legal requirements in some states for youth to get abortion without parental consent.

Radical but shouldn’t be

When talking with NM Political Report, Lorenzo called IWR’s work radical because of the systemic racial oppression Indigenous people face and because of the way abortion is treated.

“The work that we are doing shouldn’t be radical. It should be normal,” Lorenzo said. “We shouldn’t have to do this seemingly radical work. It’s not a fringe part of health care. It’s one of the safest procedures one can get in the course of a lifetime.”

Lorenzo said the way abortion is treated in the larger culture stigmatizes and shames those who seek an abortion. Because the Spanish began shaming Indigenous people when they arrived, shame has long been a part of the colonization of Native people.

The collar that is a part of some traditional pueblo women’s clothing is the result of the shame Spanish colonizers felt when they arrived in what is now New Mexico, according to Lorenzo. Previously, Laguna wore clothes that had greater flexibility for breastfeeding, Lorenzo said. That is another form of colonization IWR has worked to change. In 2017 IWR got the costume modified, with the aid from an award from the W.K. Kellogg Foundation to take the idea beyond prototype, so the dress that contains the collar is more breastfeeding friendly.

“There’s a long history of projecting shame onto our bodies to make us coverup and we don’t talk about that,” Lorenzo said.

To ensure IWR is using the funds solely for Native people in the U.S. and Canada, IWR asks callers about their blood quantum. The concept of blood quantum started with the federal government in the late 1800s as a way to create census numbers of different tribal members. Many critics consider it a genocidal policy.

“It feels icky,” Lorenzo said when asked about how it feels to use it.

Blood quantum defines bloodlines related to Native American ancestry based on the federal government’s tribal rolls. It affects Native American identity as well as Indigenous people’s ability to utilize various services, including health care. Some critics equate the blood quantum with colonial oppression and racism because, besides Native Americans, only dogs and horses are also judged by blood quantum. Critics also charge that it is an act of genocide because it is a way to reduce Native American numbers.

“Before the federal government and the Spanish, we didn’t have rolls or keep track of who is Laguna or Apache,” Lorenzo said. “Some were counted (in the rolls) who were not even from that tribe; maybe they married in or were visiting. What does that say about who gets to be Native and who doesn’t and who makes those decisions? We know that our larger Indigenous community goes beyond tribal boundaries and land boundaries. It’s hard to reconcile this with money for Native people when they already have a really hard time accessing health care.”

But, in order to ensure the IWR abortion fund is really helping only Native people in the U.S. and Canada seeking an abortion, Lorenzo and the all-volunteer IWR staff ask callers about blood quantum. Lorenzo said IWR has been able to be flexible. If a caller can show a photo of themselves in Native dress or can provide a yearbook photo taken in a Native school, IWR will accept that, Lorenzo said.

“We’ve had to get really creative,” Lorenzo said. “It’s possible to be Native and grow up on the reservation and not meet the blood quantum. It’s a reality for a growing number of Native people.”

Lorenzo and IWR will continue to make fundraising efforts.

Lorenzo said a bowlathon is in the works in the upcoming months for another fundraiser.  To raise money in the past, IWR has had a dance party, been the beneficiary of a creative pie sale and partnered with fundraising efforts for other abortion funds. New York City-based comedian Eva Victor tweeted about the Indigenous Women Rising abortion fund on Thanksgiving Day in 2018 and in one day, the fund received about $26,000 from the Twittersphere.

“I still don’t know how she found us,” Lorenzo said.

But beyond immediate fundraising concerns, Lorenzo’s larger mission of reproductive justice means that IWR staff sometimes provide a compassionate sounding board and help the caller by looking up an array of information for types of services the caller may need.

“We try to walk the walk; the caller is a whole person,” Lorenzo said.