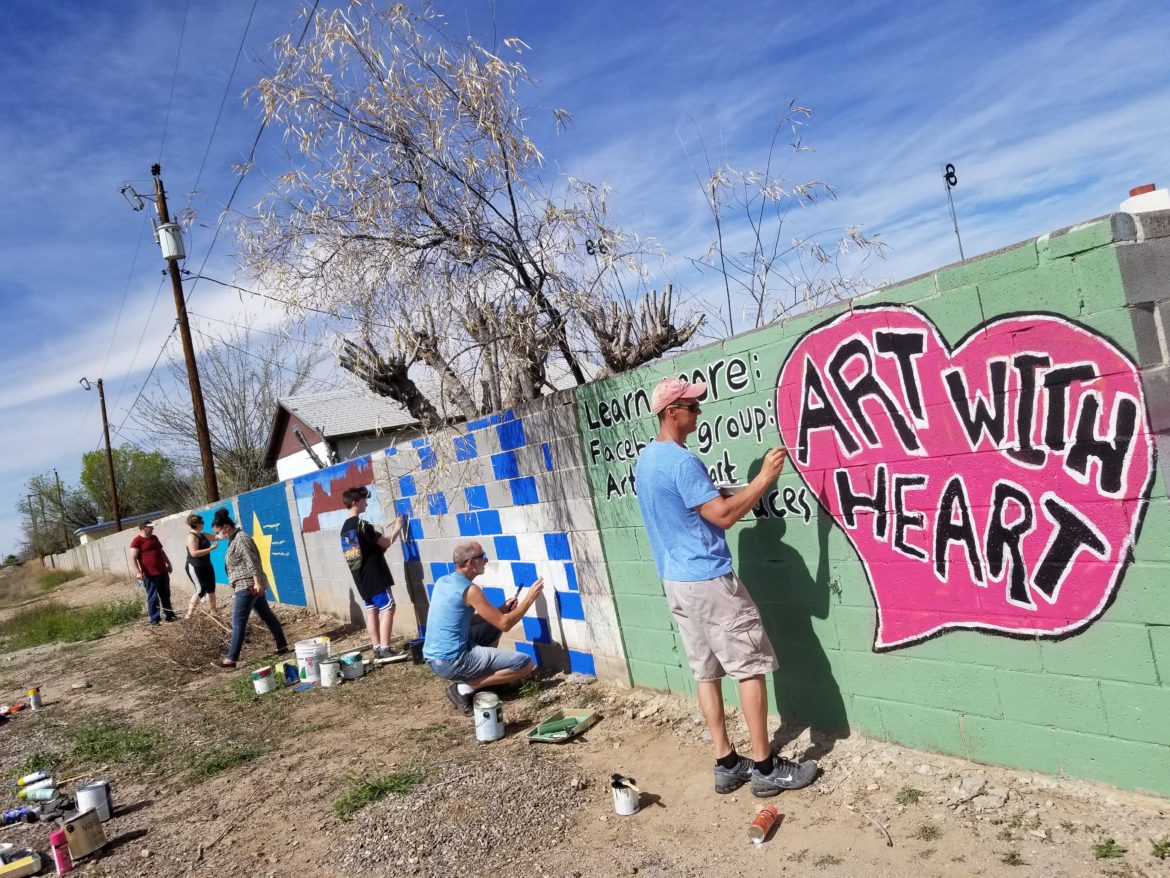 A racist tag left on a woman’s wall in Las Cruces led to a neighbor’s response.

The tagging, a backward swastika and a crossed-out Star of David, were spray painted on a wall that separates Wanda Saip Ray’s backyard from the railroad tracks on the western edge of Las Cruces. Saip Ray said she wasn’t aware of the graffiti because she hadn’t been on the other side of the wall in a while.

But while taking a walk with her husband last Wednesday, Las Cruces resident Megan McQueen saw the two tags. She wanted to do something but still practice social distancing. McQueen, who lives in the neighborhood, didn’t know Saip Ray.

So McQueen left a note on Saip Ray’s door explaining who she was, what was on the back wall, and what McQueen wanted to do about it. She left contact information so Saip Ray could reach out to McQueen.

Because of social distancing, the two still have not met in person. But by Saturday, McQueen had Saip Ray’s back wall painted over with a mural. By Sunday she engaged friends in her endeavors and a group of volunteers stayed six feet apart in areas McQueen chalked off to ensure social distancing. Other neighbors’ walls had been tagged. The group, now calling themselves Art with Heart in Cruces, have painted more murals on more walls that had tagging on them. Saip Ray’s was the only one that was clearly racist, McQueen said.

McQueen said she and her friends are hoping to paint more murals around town. They have been asking for donations of paint through Facebook and from friends. McQueen said that she asks people who donate paint or painting materials, like brushes, to sanitize the items first, then leave the items outside their door to maintain social distancing practice.

“I’d never seen that (Nazi symbols of hate) within a half mile of my house. I left a note (for Saip Ray) that I would like to respond with something as positive as they (the taggers) were negative,” McQueen said.

Both a spokesperson for the Las Cruces Police Department and Doña Ana County Sheriff Kim Stewart told NM Political Report they have not seen any increase in racism or xenophobia since the public health emergency began on March 11 in response to the global pandemic. It’s not clear when the graffiti happened.

But in Albuquerque, many in the Asian and Asian-American community have said they have seen an increase in incidents. President Donald Trump and other elected and federal officials have repeatedly referred to COVID-19 as the “Chinese virus” or the “Wuhan virus” instead of the name used by the World Health Organization and the federal Centers for Disease Control and Prevention.

Related: Signs of racism against Asians and Asian-Americans community

Both McQueen and Saip Ray said they think the graffiti was likely from bored teenagers.

“I don’t think they targeted me. I think they were just doing a lot of hate randomly. I didn’t take it personally,” Saip Ray said.

But Saip Ray said “there’s no place for that.”

Dan Trujillo, public information officer for the Las Cruces Police Department, said that especially because of New Mexico State University, Las Cruces has a diverse population with students and faculty who are from all over the world.

“We do have concerns any time there is an incident,” Trujillo said.

But for McQueen, volunteering to paint murals on otherwise empty walls is a way of staying positive during a difficult time.

“I want to encourage my friends who live in other places,” McQueen said. “We could benefit from seeing something hopeful without causing risk to other people.”

Art with Heart in Cruces
susandunlap