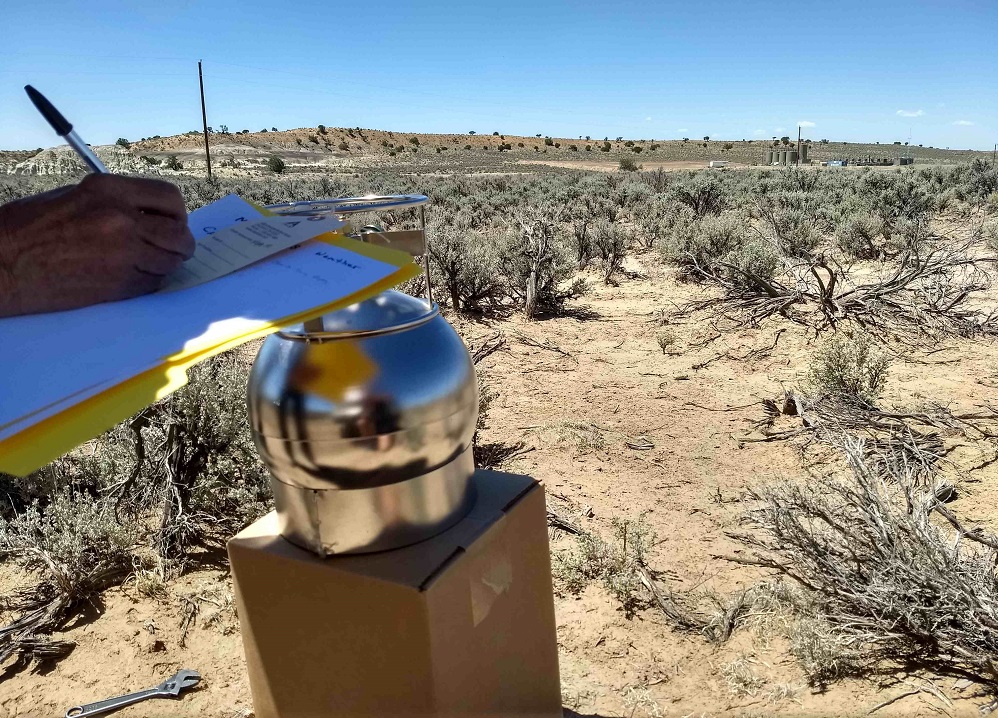 Communities in the Greater Chaco region of northwestern New Mexico have been subjected to worsening air quality caused by oil and gas development in the region. That exposure has possibly increased the risk COVID-19 poses to Navajo families living amidst oil and gas development, according to a Harvard study.

COVID-19, the disease caused by the SARS-CoV-2 virus, has spread quickly through the Navajo Nation since the first cases were reported in mid-March. As of April 14, the Nation, which spans parts of New Mexico, Arizona and Utah, reported 838 cases. Of those, 284 cases are in New Mexico.

Air quality and pollution exposure has been an issue for Navajo families living in the Greater Chaco region for as long as oil and gas wells have been drilled there, and the recent ramp up in lease sales by BLM has exacerbated health impacts for individuals living, in some instances, within a mile of more than one well pad.

And new data indicates Navajo communities located amongst oil and gas development in the Greater Chaco region may be even more vulnerable to suffering serious illness and death associated with COVID-19.

Living and breathing in the Greater Chaco region

Air quality concerns stemming from oil and gas production in the area have plagued the eastern Chapter houses of the Navajo Nation for decades, but demands for mitigation have fallen on deaf ears.

“The Navajo Nation Human Research Review Board (NNHRRB) approved, in 2019, a community-focused Health Impact Assessment (HIA) to shed light on the impacts of oil and gas operations on families living in the Chaco area. The study was conducted by chapter staff and trained community volunteers and the final report was prepared by authors from the Counselor Health Impact Assessment – Hozhogo’na’ada Committee and the Environmental Health Project, who summarized the PM2.5 data and the VOC samples analyzed by ALS Labs. The final report also includes a cultural survey conducted in the three contiguous chapters of Counselor, Ojo Encino and Torreon.

The findings were grim. The report found high levels of particulate matter, referred to as PM2.5, in the open air between homes and well pads.

“It’s not dust. These are really, really, fine nanoparticles that go deep into the lungs,” Seamster said. “And once they’re there, there can be a blood-gas exchange, the particle contaminants are so small they can enter the bloodstream at that point, and create other types of illnesses, that may not be as readily identified or felt as a respiratory tract infection might be.”

That’s partly because many of the wells in the area are older, and were put in place before regulations increased the distance that well pads can be located from boundaries, Seamster said. The weather also plays an important role in how the particulate matter is dispersed throughout the atmosphere.

But well density in the region plays another important role in locals’ exposure to pollution, Seamster said.

“We have a really high density of wells. Counselor is only 77,000 acres, and there are about 400 wells there,” Seamster said. She pointed to the Lybrook elementary and middle school, a public school in Counselor that serves the area.

“They have around 30 wells that are within a mile and a half. They may not all be operating, they may not all be flaring at the same time, they probably aren’t, but they are all emitting different contaminants at different stages of their operation.”

A study conducted by a team of researchers led by Xiao Wu at Harvard’s T.H. Chan School of Public Health, found that air pollution exposure is linked to increased mortality rates associated with COVID-19.

The report, published on the preprint health services platform Medrxiv.com in early April, uses modeled PM2.5 exposure estimates and county-level census data to examine how exposure to particulate matter may increase the risk of mortality related to COVID-19.

The results? The report found long-term average exposure to PM2.5 is positively associated with increased COVID-19 mortality — in other words, long-term exposure to particulate matter is likely linked to an increased risk of death for individuals who contract COVID-19.

“We found that an increase of only 1 [microgram per meter cubed] in PM2.5 is associated with a 15 percent increase in the COVID-19 death rate,” the authors wrote.

The study is preliminary and not yet peer-reviewed, but the team has submitted it for peer-review and publication in the New England Journal of Medicine.

Seamster pointed out that Navajo families living in the Greater Chaco region are frequently exposed to large spikes in particulate matter.

“A cluster of homes could have three or four or five wells within a mile or two, and so it doesn’t matter which way the wind blows, it’s going to blow over one of those wells, and they’re going to get high levels of particulate matter.”

The report also looked at a number of other variables that might influence mortality rates related to COVID-19, such as the number of hospital beds available in the community, and rates of chronic illnesses like diabetes or heart disease. Many of those factors are also widely prevalent among Navajo communities where healthcare systems have been chronically underfunded, basic infrastructure is lacking, and healthy food supplies are hard to come by.

Wu’s team at Harvard said the study they did “underscores the importance of continuing to enforce existing air pollution regulations to protect human health both during and after the COVID-19 crisis.”

Seamster agrees. She said her group will continue pushing for the state to adopt tighter regulations around emissions and pollution from oil and gas development in the area. The New Mexico Environment Department is currently in the midst of a process to draft new methane regulations for oil and gas operators in the state.

“We’re talking about massive amounts of pollutants going up every year that are allowable under our current regulations,” she said. “They need to be tightened.”