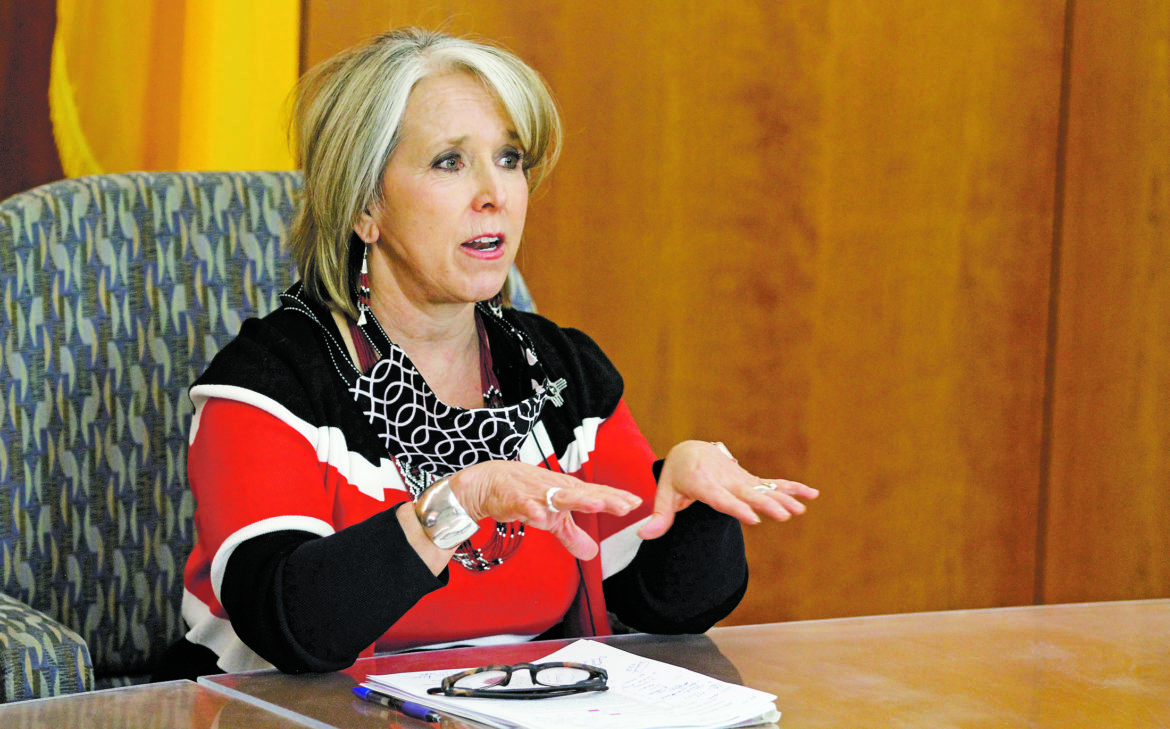 Gov. Michelle Lujan Grisham urged New Mexicans to keep up social distancing and stay-at-home measures to continue to slow the spread of COVID-19 in the state.

“I need your help,” Lujan Grisham said during a press conference Tuesday afternoon. “Stay the course, stay in your bubble. Don’t give in, don’t give up, stay hopeful. Think about the power you have to make a difference in our own communities and state.”

New Mexico has “some of the most scarce hospital resources” like hospital beds and equipment and healthcare providers per capita in the nation, Lujan Grisham said.

“We have about half as much, per capita, as most states in the country,” she said. “We really have to work hard, and really watch how many are in the hospital, how many are on ventilators, to make sure that we slow the spread and can manage this number and make sure we don’t overwhelm our healthcare system.”

Lujan Grisham said social distancing is crucial while there is no vaccine available.

“No amount of effort will work without a vaccine, unless the social distancing — which is our social contract to one another and the state — unless we maintain that. It is the only way you can prevent spread,” she said.

She chastised New Mexicans for an increase in movement during the stay-at-home order, not wearing face masks, and not observing social distancing while in public.

“This is problematic,” she said. “In 14 days, we have no doubt it will indicate an increase in transmission and an increase in cases. It’s exactly the opposite thing we need to be doing.”

“Social distancing does not mean going about your regular life with your friends and families, with a little bit of space or no space between you. In a world where we don’t have a vaccine, it is simply not safe,” she said.

The state Department of Health amended the public health emergency order to include face coverings, which are an important component to slowing the spread of COVID-19, Lujan Grisham said.

Effective May 6, employees working at restaurants and essential businesses operating as retail space with a footprint greater than 50,000 square feet will be required to wear face coverings. Effective May 11, every business that is identified as an essential business in the current public health order that is operating as a retail space shall require employees to wear face coverings.

“Cloth masks, surgical or procedural masks,” Lujan Grisham said. “They can be do-it-yourself, we just want to make sure that you’re using something, and requiring that every single one of your employees have these face coverings.”

She also urged, but did not require, consumers to wear masks when out in public “in solidarity” with essential workers, and said the only way to reopen the state is to demonstrate that the virus’s spread is “managed to the highest degree possible.”

“We make that decision based on the data,” she said. “The actions you take every single day determine our course of action to safely and prudently reopen.”

Human Services Secretary David Scrase said he is disappointed at the state’s spread of disease rate, which “is not trending this week in the way we were hoping it would.”

He said trend lines show the average number of new cases across the state are not declining yet, something he considered “disturbing.”

“If you look closely at the green line, you’ll see that’s going up, we are not actually seeing that downward trend,” he said. “That green line should look like a mountain, it should go up and then it should come back down. It’s actually plateaued, and that’s a problem for us in terms of containing the spread of the disease.”

He also said the doubling time for the disease, the length of time it takes the number of cases to double, is now at a high of 6.3 days. A higher doubling rate is better.

“For every active case we have that will turn into 27 new cases in 30 days,” Scrase said. “This virus is very contagious, it spreads very rapidly, and the value of social distancing is just as important now, if not more important, than it was in the beginning.”

State is ramping up testing

“We need the efforts of both the state and our private and public partners to reach that capacity,” Kunkel said, adding that the state has been focusing on long-term care centers, congregate sites, essential workers, childcare workers and grocery stores.

“But everyone can get tested,” she said.

Anyone who wants to get tested can now schedule a test through their local public health office, or by calling 1-855-600-3454 to request a test through the state Department of Health. The department is also developing a calendar for testing businesses. Kunkel urged any business that wants to get tested get on the calendar by calling the local public health office.

Kunkel said the state has launched a testing initiative at corrections facilities. The state plans to have all guards and staff tested, as well as 25 percent of inmates by May 13.

“We will make sure every new inmate is tested on their way in, and has a 14-day isolation,” Kunkel said. The DOH will also review isolation plans at correctional facilities for inmates who test positive.

The state Early Childhood Education and Care Department will use a portion of the federal funding received through the CARES Act to offer incentive pay to early childhood professionals working in centers that remain open during this pandemic. These workers will receive $700 per month, in addition to their current salaried workers, and $350 per month to part-time workers, she said.

“We’re also going to provide $12 million in grants for licensed childcare providers, who have been unequivocally harmed by the emergency,” Lujan Grisham said. “Some of the lowest-paid professionals in any career in the state, are in early childhood and childcare work. These hazard pay efforts are really important, and I wish it was more.”

“In her press conference the governor threatened to extend the business closures that are destroying our state’s economy, and expressed her desire to steal from New Mexico’s children instead of cutting back the out of control spending from the last two years,” Townsend said in a statement. “People across the state are having to tighten their belts. The Governor’s answer to this problem is to spend more. Her refusal to accept the magnitude of the state’s fiscal and economic crisis is disturbing.”