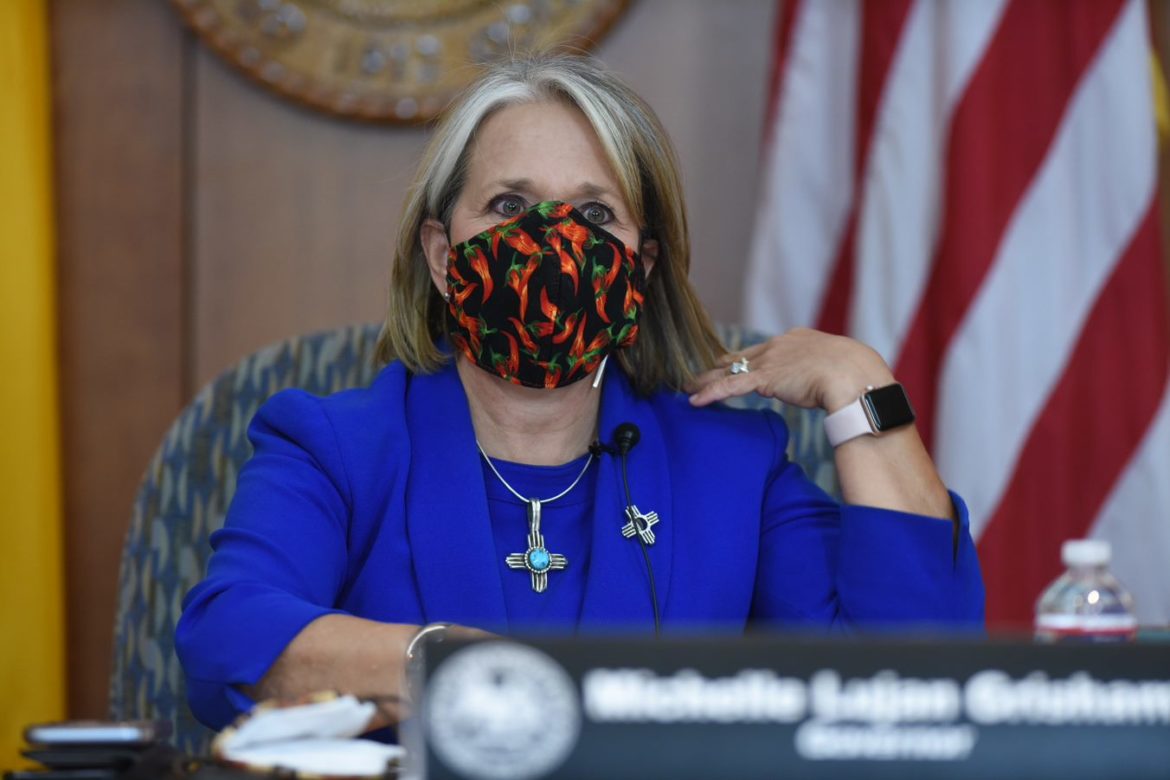 Gov. Michelle Lujan Grisham at a press conference on June 25, 2020.

One message resonated throughout the state’s press conference on COVID-19: wear a mask.

Gov. Michelle Lujan Grisham and officials said wearing a mask is key to slowing the spread of the virus—and to further reopening the state.

Lujan Grisham said the state of New Mexico has seen an uptick in cases of the disease in recent days, and that further easing of restrictions, and moving on to the next phase of reopening, would be on hold.

“Our goal should be to reduce cases,” she said. “What happens when we reduce cases? Fewer deaths. Fewer hospitalizations and we are managing the virus. We are clearly not there.”

Without slowing the spread, the state would not be able to reopen schools in the fall or reopen further businesses.

“I don’t want to do that. But it has to be on the table if I’m serious about making sure 350,000 students can go back to school,” Lujan Grisham said.

The governor said if more residents wear masks and help slow the spread of the disease, the state could further reopen areas of the state and safely reopen schools.

She said if you don’t wear a mask “then you don’t support business.”

She said the uptick in cases also caused the state to “pause” further reopening, and entering phase 2 of the reopening.

On Thursday, the state announced 207 new cases of COVID-19, the most in a single day since June 5.

Human Services Department Secretary Dr. David Scrase said that the state must be cautious to avoid what is happening in other states throughout the country, including some neighboring states.

“We’re not improving, we have to be vigilant, if we want to reopen safely and gradually, it’s going to be slower,” he said while presenting numbers that showed an increase in spread rate, or the number of people each infected person spread COVID-19 to, in most regions of the state.

The state’s gating criteria hopes to keep the spread rate at 1.05, but several regions had higher numbers in recent days.

Similarly, the seven-day average in the number of cases increased in most regions, though it continued to drop in the northwest region, which was the site of the largest increase in cases for much of the state’s COVID-19 recovery.

Scrase also said that it is more important than ever for New Meixcans to abide by COVID-safe precautions as the state reopens.

“We have to do more of the preventative measures, not less,” he said. This is because, as Lujan Grisham noted, that reopening introduces more risk of spread.

Lt. Gov. Howie Morales appeared at the press conference to talk about the state’s “hybrid model” of reopening schools in the fall.

“It’s going to look different compared to what we’re used to in our schools,” Morales said. It would include in-classroom instruction as well as at-home instruction for students, to decrease the chances of further spreading COVID-19. This could include having students go to school for a portion of the week, then have a portion of the week with students learning online.

Morales said the safety and wellbeing of students, educators and other staff was one of three principles of reopening schools in the state, along with maximizing in-person instruction and relying on science and data to guide decisions.

“Our goal is to move into the full entry capacity,” Morales said.

But Lujan Grisham said the state would be ready for testing if necessary.

“We have a rapid response system for entities, businesses and organizations that have a positive case,” she said. “Those same rules would apply.”

“The devil will be in the details,” Scrase admitted.

But he said the models showed that a hybrid model would have a similar impact on COVID-19 spread as pure distance learning, which is what schools in the state, and many places across the nation, have done since March, when the state closed in-classroom teaching statewide.

A state report showed that the distance learning efforts resulted in months of lost learning and would likely further increase the gaps that are in place between different socioeconomic classes.

Arizona and Texas, two states experiencing outbreaks of COVID-19, including record numbers of new cases and hospitalizations in recent days after early and aggressive reopening efforts, were also frequent references during the press conference.

“All the states, by and large, opened up. I think it gave way too many Americans this very false sense of security,” Lujan Grisham said.

Scrase said the state knew of cases of people traveling to Texas, mentioning Lubbock and Amarillo, and later testing positive for COVID-19. Areas of Texas that border New Mexico, including the panhandle and El Paso, have a high rate of cases.

As for Arizona, Scrase called it an “absolute disaster” and noted cases of New Mexico residents traveling to Arizona and contracting COVID-19.

“This is a challenge for us,” he said.

Lujan Grisham also noted the risk for travelers, both into and out of the state.

The state did not have any immediate info on the number of new cases that could be attributed to residents traveling to other states. But Lujan Grisham noted that many New Mexicans have family members in other states or work in other states while living in New Mexico.

And she also noted that the initial confirmed cases in New Mexico in March came from travel.

Still, she reminded New Mexicans that the state’s stay at home order remains in effect.

“You should stay home,” Lujan Grisham said. “If we stay home and we minimize our interactions outside of our homes and family units, we will do a better job in New Mexico.”

Still, when leaving the house, Lujan Grisham said wearing a mask is the most important thing New Mexicans could do to make sure the state gets closer to normal than it has been in recent months.