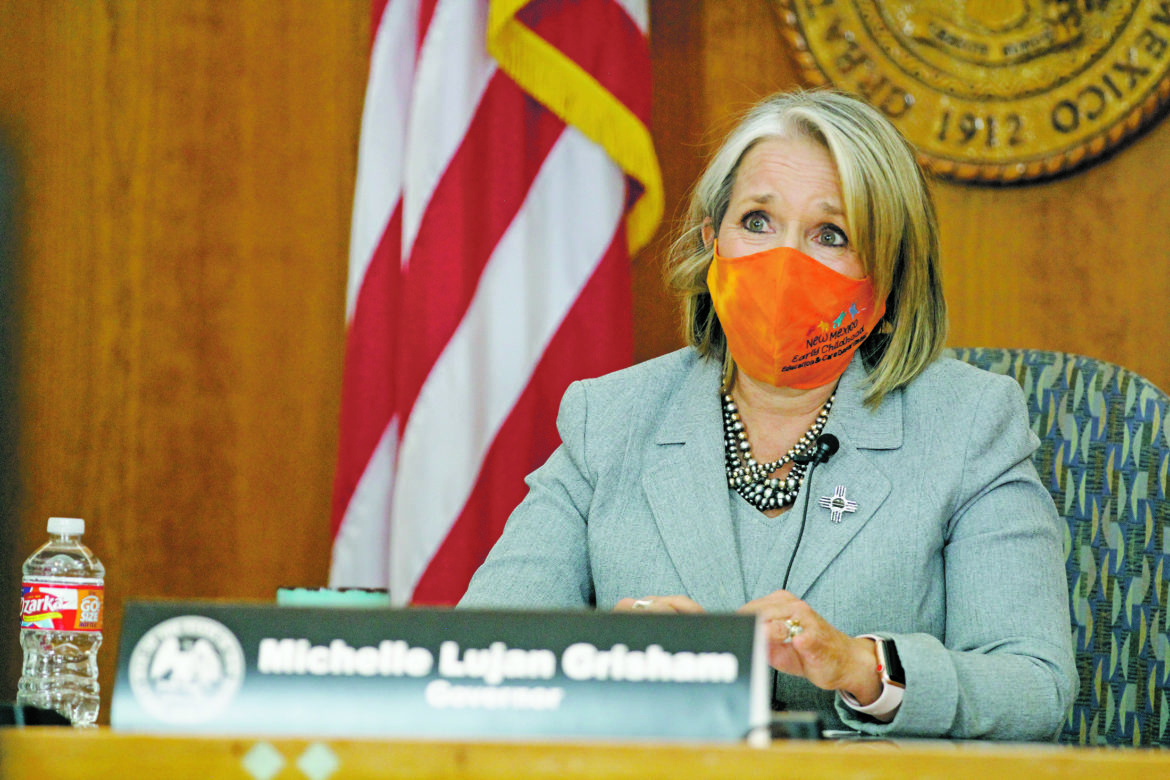 Not only is the state not going to expand its reopening, but if the COVID-19 situation in the state does not improve, the state could be looking at reimposing restrictions like other states throughout the country, including two that neighbor New Mexico.

That was the message during Gov. Michelle Lujan Grisham’s weekly press conference on COVID-19 in the state.

“If we do not stabilize, we will move backward,” she said.

She announced two big changes to a public health order, which will run through July 15: All travelers from other states will be required to self-quarantine for 14 days and those not wearing masks in public will be subject to fines.

Lujan Grisham said she wished she didn’t have to enforce the mask mandate through fines, but that there was not enough adherence to the state’s mask requirement. Businesses will also have a responsibility, she said.

Some areas of the state have passed their own mask requirements.

The Albuquerque City Council passed an ordinance that would require all businesses to supply masks to workers. And the Town of Taos said those who do not wear masks in public in the town would be subject to a petty misdemeanor. In Las Cruces, the city council encouraged, but did not enforce, a mask requirement in businesses.

As for the self-quarantining of travelers, it would not apply to those who are employed by an essential business under the state’s public health order, airline employees, those employed by a federal agency, military personnel and more.

She acknowledged that doing so would be a big hit to the state’s tourism industry.

“But in a pandemic, traveling, particularly in areas that have different rules than we do and higher infection rates, we’re just inviting the virus,” she said.

Dr. David Scrase, the Human Services Department Secretary, said that the number of out-of-state residents reported as confirmed COVID-19 cases to the New Mexico Department of Health was between 9 percent and 10 percent.

And the amount of New Mexico residents who tested positive after traveling to other states was at a similar level. While it wasn’t clear how many from that contracted COVID-19 while traveling,

Lujan Grisham said there didn’t appear to be a large increase in cases because of protests, though they feared that it could still present itself.

A working paper by the National Bureau of Economic Research found no significant increase in COVID-19 cases tied to Black Lives Matter protests. The paper, which has not been peer-reviewed, said the lack of increase of cases could have come because the demographics of the protesters were younger people who may not have shown symptoms and were never tested, and that most protesters wore masks. The paper also hypothesized that the protests caused many others to stay at home and themselves physically distance, so avoiding contracting the disease.

But what seemed to be the overall largest contributor was the state easing restrictions in late May and the beginning of June.

“We’re in a big surge in cases,” Scrase said. “This means that the things we did to reopen back in late May, early June were not sufficiently countered by actions that we all took to prevent the spread of the disease.”

He said that cell phone data shows that mobility continues to increase, nearing pre-pandemic levels in some areas.

And other events like graduation parties have also resulted in the spread of COVID-19.

The two areas in the state with the highest “spread rates,” or the number of people the average COVID-19 case infected, were southeastern New Mexico and the Albuquerque metro area.

And, Scrase warned, the drop in hospitalizations and deaths in recent weeks will likely reverse because of the recent increase in cases.

He said that Los Alamos National Laboratory said the lag time is about 13.2 days for these.

Scrase noted that the overall numbers in New Mexico were rising as they were in Arizona and Texas, though they lagged and weren’t breaking records like in those other states.

“Ours came a little bit later than our neighbors Texas and Arizona…but now those numbers are coming to New Mexico,” Scrase said.

While those two states have reimposed some restrictions, New Mexico only reimposed the self-quarantine for travelers.

But Lujan Grisham warned if the numbers don’t improve, that could change.

“If it gets worse, then you have to roll back like most of the other states with these huge spikes are doing,” she said.

And, she noted, this could include not reopening schools in the fall as planned.

So, she said, New Mexico residents need to abide by the state’s restrictions, which still do not allow mass gatherings of five or more people.“If we don’t get this right, it basically says to them, ‘You’re not important enough to get this right,’” the governor said.

This will be a particular challenge this weekend, for Independence Day celebrations.

“The behavior this weekend alone can be sufficient to create incredible transmission and risk to everyone else in the state,” she said.

She urged people to not have large gatherings, including family gatherings, since those could increase the spread.

If people do not, she warned, the number of infections would increase and the state would need to bring back restrictions.

Still, she said the state has proven it can address COVID-19.

“We flattened the curve once before, and I have no doubt that we are able and will together flatten it again,” Lujan Grisham said.