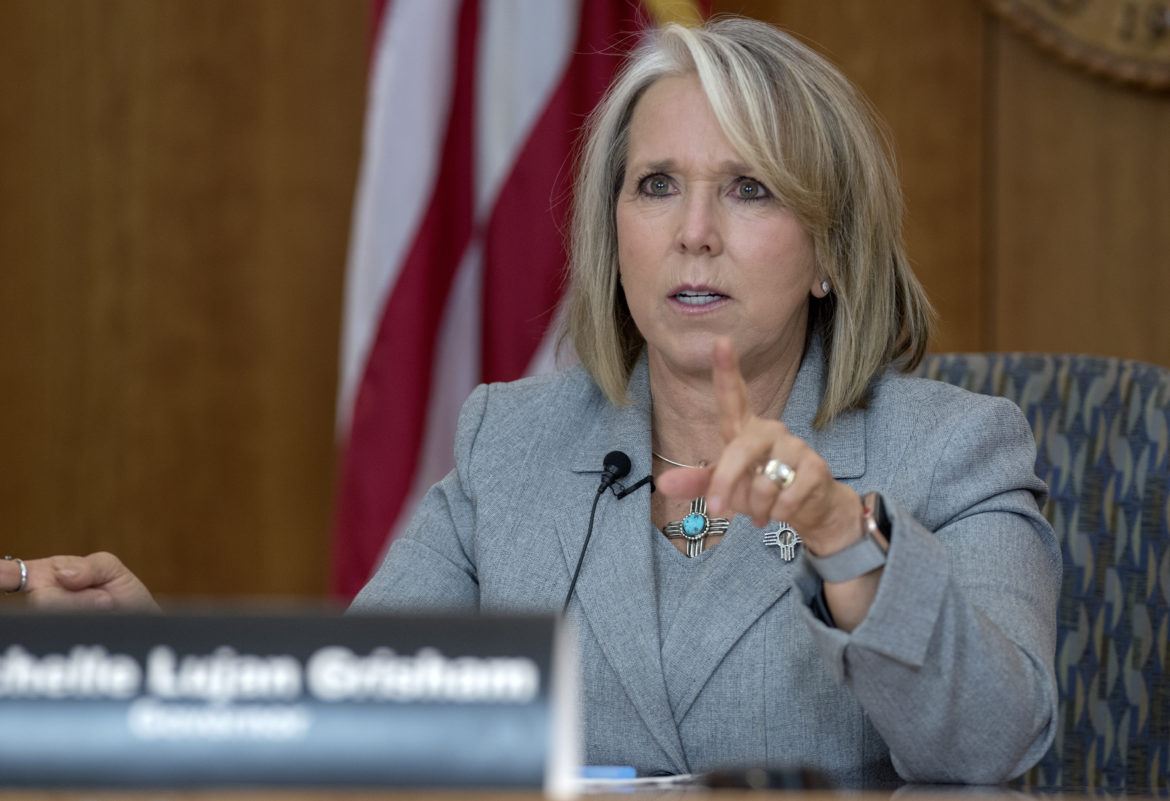 Gov. Michelle Lujan Grisham gives her weekly update on the COVID-19 health emergency in New Mexico and the state's effort to stop the virus. The news conference is being held at the Roundhouse in Santa Fe, Thursday August 6, 2020.

Gov. Michelle Lujan Grisham and state officials had good news for New Mexicans when it came to COVID-19 during her Thursday press conference.

The number of cases, after reaching a peak in mid-July, have dropped down in the past couple of weeks through much of the state. The positivity rate on tests has also dropped, even as the number of tests remains high in the state.

But Lujan Grisham noted that there is a long road ahead, and it’s not an invitation for New Mexicans to abandon COVID-safe practices.

She warned the state is not “out of the woods” yet, even as things trend in the right direction.

Because of this, and other efforts, Lujan Grisham and Aging and Long-term Services Secretary Katrina Hotrum-Lopez announced that limited nursing home visitation would be allowed.

“This is a very, very critical population. A very vulnerable population,” Hotrum-Lopez said. “So making sure that we are opening slowly and we don’t have an invitation for all facilities to make sure that we’re doing right is so important.”

To protect the vulnerable population—elderly people are a large number of those who have died from COVID-19—strict protocols will be in place for visitations. Only facilities that do not have an active COVID-19 case would be allowed to host visitors and they must be in a county with low numbers of recent cases and low test positivity rates. The visitors themselves must pass a screening before entering the premises.

And the visits would be outdoors, with social distancing required, plexiglass in place and appropriate personal protective equipment worn by the visitor and by the resident.

The goal, Hotrum-Lopez said, was to start visits next week.

Lujan Grisham noted that there would not be any hugging, holding of hands or any other touching between visitors and residents.

Still, the governor said it was only a beginning.

“We need to get to a more routine visitation environment,” she said.

But she also noted that it would be one of the highest-risk efforts the state has put into place since implementing restrictions.

One reason, Scrase said, was that “we reported quickly” while other states lagged in providing data at nursing homes and long-term care facilities to the U.S. Centers for Disease Control and Prevention.

“This is really good news, because we think we’re now getting to the point with the number of cases we’re seeing that things are getting under control,” he said. He noted the state’s restrictions on visitations as well as the rapid responses from the state when a single case was found at a facility.

But in recent weeks, the overall numbers improved. Scrase said “Case counts are coming down consistently,” averaging in the 300s last week, and declining to the low-200s this week. Thursday, the state reported 212 new cases of COVID-19.

Other data also pointed to improvements. The spread rate dropped to 0.72, echoing the drop in cases. This means that each person who has COVID-19 will, on average, spread it to 0.72 people. Anything below one on the spread rate means cases are dropping.

The seven-day-average of the test positivity rate also remains under the gating criteria of 5 percent. This means that the percentage of positive tests to the total number of tests remains manageable.

Nationwide, this number is 7.6 percent, per Johns Hopkins University—and even higher for most neighboring states. Arizona’s stands at 16.6 percent, actually an improvement over when it stood near 30 percent in July, while Texas’ stands at 15.3 percent, and has risen in recent days.

Colorado’s seven-day-average positivity rate is 6.6 percent while Utah’s is at 9.8 percent.

The lower number of cases has also aided New Mexico in another key part of slowing the spread—efficient contact tracing. The state aims to contact every person who tested positive for COVID-19 within 24 hours of their results, and to speak to those who came into contact with the COVID-19-positive individual within 36 hours of the results. The state is currently at 32 hours for the confirmed case and 49 hours for the contacts. But this represents a big improvement over when the cases in New Mexico hit their peak.

“To keep our cases down to where they need to be to where we can open more businesses and schools, we need to do contact tracing,” Scrase said.

One thing Lujan Grisham wanted to emphasize is that just because news is improving, that doesn’t mean residents can go back to a more-normal lifestyle.

“These are not invitations,” she said. “It’s still unsafe out there. COVID exists.

But, she noted, that she felt good about the efforts of local businesses and of New Mexicans.