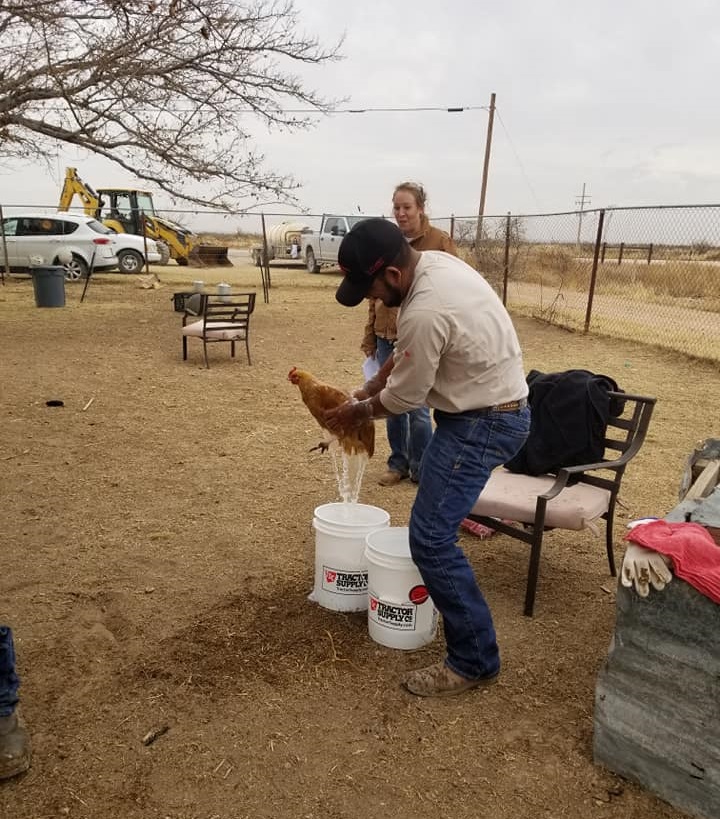 A WPX employee washes one of Penny Aucoin's chickens after a produced water pipe burst drenched her property with the wastewater. Aucoin was later forced to euthanize all her chickens.

Penny Aucoin’s chickens are all dead.

A produced water pipe located across the street from her Carlsbad-area home burst in mid-January, drenching her house and yard with the toxic water for an hour before it was shut off.

In the aftermath, Aucoin was forced to euthanize 18 chickens and one dog, and give up her remaining goat. A county official told her she couldn’t eat her chicken eggs, couldn’t eat their meat, and said she probably shouldn’t eat anything grown on her property, either.

The operator responsible for the spill, WPX, attributed the incident to equipment failure. The company removed 25 cubic yards of topsoil from the property, and paid for a third-party contractor to treat the remaining soil.

Aucoin’s life has changed dramatically since the incident. What’s left of her yard is basically useless. The family doesn’t spend any time outside their house anymore, for fear of lingering contaminants. Independent analysis of the remaining soil provided to NM Political Report indicated there were still unhealthy levels of contaminants such as benzene, chloride and “total petroleum hydrocarbons” present.

“They would move if they could,” Mariel Nanasi, who is representing the family as an attorney, told NM Political Report.

But there is no more help coming. As far as the Energy, Minerals and Natural Resources Department’s Oil Conservation Division (OCD) is concerned, the spill cleanup has been completed, and the case was officially closed August 4.

Nanasi, who also serves as executive director of the clean energy advocacy organization New Energy Economy, said that the state’s failure to impose any penalties on operators who spill produced water, crude oil, and other contaminants is a “dereliction of duty.”

“There’s no tickets, there’s no penalties, there’s no violations, there’s no revocation of permits, there is no regulation in any meaningful way,” she said. “There’s just an anything goes, wild west situation with oil and gas — and they know that. They do whatever they want, and they’re sloppy.”

The OCD does not generally fine oil and gas operators for unintentional spills, according to OCD director Adrienne Sandoval.

“It’s not a violation just to spill it,” Sandoval told NM Political Report. “What is a violation is if you do not follow our rules and requirements to report it to us and to properly remediate it. That’s where the violation comes in. It’s not an automatic violation if it’s an unintentional release onto the ground, but it’s how you manage it.”

Intentional releases are treated differently and can result in penalties.

“That’s in a whole different category,” Sandoval said. The OCD recently assessed fines for an alleged incident of illegal dumping of produced water earlier this year.

When an unintentional spill does occur, the operator must notify OCD and present a remediation plan.

“The operators are required to characterize the spill and submit a remediation plan to us. In the remediation plan, they basically are going to lay out the problem, it’s this big, it’s this deep, so we’re proposing to do measures X,Y and Z,” Sandoval said.

The OCD reviews the remediation plan and determines whether it is sufficient before approving it.

“Along the way, they may have to submit interim reports to us, or they submit a closure plan. In order for the spill to be closed out, they have to prove to us that the spill is truly remediated and that there aren’t any issues still left on the site,” she said.

Sandoval said the agency will work with operators that have had multiple spills to address the underlying issues at play.

“If we have an operator who’s had repeated releases, particularly at the same facility, we do direct them to take actions, to fix whatever that issue is. If it’s some problem that’s occurring over and over again, we can trend that data and make sure we work with the operator to try and get that fixed,” Sandoval said.

And Sandoval also said the agency has the authority to include spill history when it’s reviewing permit applications or renewals.

The OCD’s spill rule “gives us pretty broad flexibility to take into consideration any action against the operator in any type of permit renewal,” Sandoval said. But she added that she didn’t know of any operators losing their permit due to repeated unintentional spilling incidents.

As far as Nanasi is concerned, the OCD’s handling of spills is a regulatory failure. She pointed to WPX, which had another spill — this one attributed to human error — just one month after the equipment failure that caused the spill on Aucoin’s land.

“WPX was caught illegally dumping wastewater into the earth, and they are still allowed to operate. And nothing has been done about it,” Nanasi said. “Who is harmed by that? New Mexicans.”

‘How is this acceptable?’

The OCD’s handling of produced water spills in the oilfield drew criticism from several individuals who presented technical testimony during a recent hearing on a proposed produced water rule amendment.

Norm Gaume, a retired engineer and a member of the state’s Produced Water Research Consortium’s technical steering committee, pointed to a number of problems he saw in both the data the state collects about spills and how it handles unintentional releases.

“I think there is a huge problem in preventing produced water releases within the oil field,” Gaume said. “And I was very disappointed when I first read this rule to see that it takes no steps to fulfill the writ of the Oil Conservation Division, which is to regulate produced water in a manner that protects public health, environment and freshwater resources.”

Gaume pointed to data about spills between 2016 and 2019 that’s publicly available on the OCD website. Of the 1,588 major produced water spills listed in the database, most were preventable, Gaume said. He pointed to nearly 200 spills that were attributed to corrosion.

“Well, produced water is incredibly corrosive. In order to contain produced water, one has to use materials that won’t corrode,” he said.

The majority of those incidents, representing 900 spills, were attributed to equipment failure.

“I know equipment fails because it’s neglected, it’s not maintained. And I know that when equipment reaches near the end of its life, that it’s common practice to replace it before it spills,” he said. “The fact that there were a little under 900 major produced water spills due to equipment failure over that four year period indicates to me that those were preventable and there’s likely a fair amount of neglect occurring.”

Gaume made similar conclusions about spills attributed to human error and “normal operations.”

“Human error is certainly a preventable cause. More than a couple of spills were due to normal operations. How can that possibly be acceptable? Overflows of tanks or pits caused 130 spills — that certainly is preventable and negligent,” he said.

In a phone interview with NM Political Report that occurred after the hearing, Sandoval agreed that many spills are preventable.

“In general, a lot of spills, unfortunately, are preventable. But most operators operate in a prudent manner, and take efforts to minimize their spills,” she said. “Unfortunately, sometimes things happen anyway. And when they do, it’s the division’s job to see that they are properly addressed such that public health and the environment are protected. Our role here is to make sure that releases, regardless of the volume, or the intent, are cleaned up.”

Gaume, who formerly served as director of the Interstate Stream Commission, also criticized the state for how it collects and manages data related to produced water. One proposed change to the produced water rule would require operators to submit data on how much freshwater and recycled produced water operators use during hydraulic fracturing.

“We’ve talked about the need for data, and I think we do have a great need for much better data, particularly with regard to the contaminants in produced water, their concentrations, their toxicity, all the aspects of the quality of produced water,” he said.