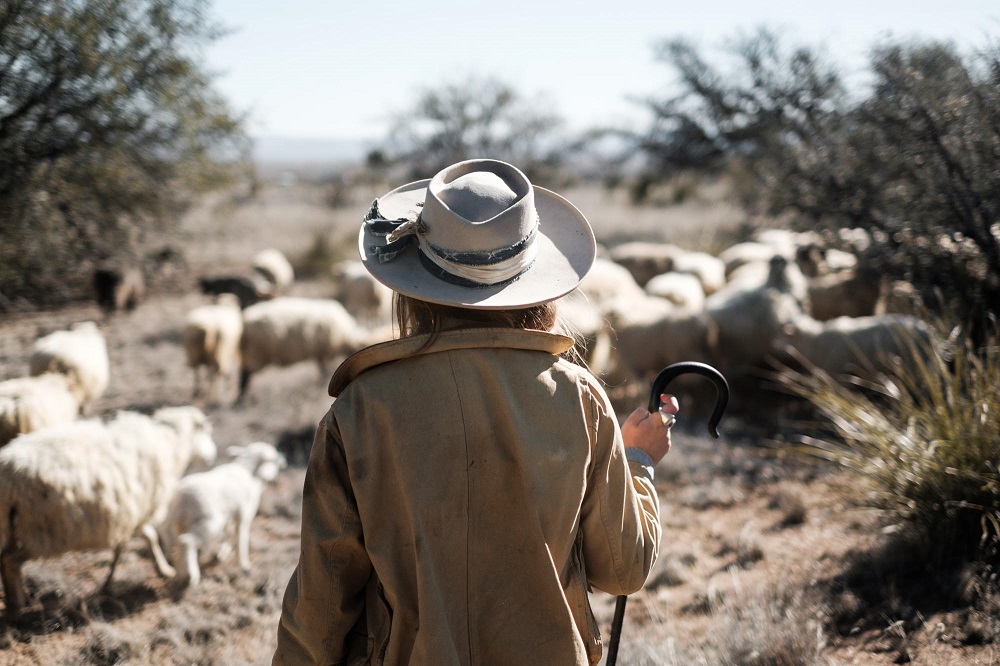 A shepherd looks over the flock of churro sheep at Rio Milagro Farm.

Rangeland management of the 20th century was dominated by killing anything and everything that threatened livestock. Predators, and especially wolves, were characterized as both nuisance and threat to ranchers and hunters alike for most of the last century.

As the nature writer Aldo Leopold once wrote about the first quarter of the 20th century, “In those days we had never heard of passing up the chance to kill a wolf.”

That mindset, encapsulated by extermination campaigns waged by the U.S. government up until the 1960s, brought species like the Mexican gray wolf to the brink of extinction.

Today, wolves, coyotes and other predators are still considered public enemy number one in many ranching communities. But a growing body of research indicates that killing predators doesn’t actually help prevent attacks, and may in fact lead to increased conflicts between humans and livestock.

“There’s this old saying, if you kill a coyote, two show up to its funeral,” said Michelle Lute, National Carnivore Conservation Manager at Project Coyote, adding that there is now an “increasing scientific understanding around why people say that.”

“We didn’t know that for a long time, because science only answers the questions that we ask of it,” Lute said. “We just made this assumption that we’re going to kill a bunch of coyotes and of course that’s going to help.”

Now, there are hints that the mindset among some ranchers around wolves and other predators is beginning to shift away from lethal management and towards something like coexistence, where preventative management practices are employed to keep livestock losses at a minimum, while keeping the rangeland ecosystem healthy.

Such techniques “prevent loss before they occur, which is better for everybody,” Lute said. “It’s more humane and it’s cost effective in the long run.”

“It really is the best first approach because it’s proactive,” she said.

Jennifer Douglass is a modern-day shepherd. She owns Rio Milagro Farm, a churro sheep ranch located near Silver City, that produces both wool and meat.

“We’ve had our flock of churros for 20 years,” Douglass said, adding that the herd ranges from 80-140, depending on the season. And in those 20 years, she has not lost a single sheep to predation.

“That doesn’t mean that we won’t, but we haven’t,” she said. Her secret? Dogs.

“We’ve had a catahoula for 20 years,” Douglass said. “Catahoulas are not known for sheep herding, but they really are fantastic. They’re more for cattle, because they’re pretty hardcore. When they’re trained correctly, they’re the only sheep dog that I know that protects and herds at the same time.”

Guard dogs are an example of what Lute calls “ancient tools” of ranching that can help prevent depredation.So, too, is shepherding — meaning staying with the herd while the animals graze out in the open.

“The presence of humans is one of the first and best barriers for preventing conflict in the first place,” Lute said. “We see a lot of success with range riders in the Mexican gray wolf recovery area.”

Other tools include using mobile fencing and fladry, which refers to tying strips of fabric along a fence that flap in the breeze and frighten away predators. Providing shelter for calving and lambing, and cleaning up carcesses and afterbirth, can also prevent predator attacks.

“[Predators] don’t typically look at livestock at first as prey, if they have available prey like deer or elk,” Lute said. “But when you start having attractive things like carcasses left out, then the potential for conflict goes up.”

These older, traditional practices are often surprisingly simple but aren’t used widely in modern ranching operations. There are some good reasons for that, Lute said, pointing to drought.

“One of the challenges now with climate change is that the forage that you have in a particular place has been decreasing with drought,” Lute said. “Where people are grazing across a large landscape, they’re spreading cattle out further and further. That really creates a challenge in covering a lot of terrain to protect livestock. It also gets in the way of using fences in a lot of cases, because ranchers want to spread cattle around so that they’re getting appropriate forage access.”

RELATED: As the climate warms, ranchers keep their eyes on the grass

Still, even some larger operations are including some of these tactics within their wider range management practices.

“Our ethos is that if we try to manage the whole ecosystem and be thoughtful about that, theoretically, predator issues on the whole, and across a period of years, will not be as bad as it can be in some areas,” Greenwood said.

Part of that strategy involves managing for grassland health and biodiversity, she said.

“[That] means better habitat for all the things that coyotes and mountain lions like to eat: deer, rabbits, gophers and so on. Having more plant cover, less bare ground, more diversity and so on,” she said. “I think that can do a lot in the long run, especially for coyote problems.”

Research on the efficacy of predator killing is relatively new but growing.

Studies indicate that unstable social dynamics within predator populations can lead to increases in conflict between predators and livestock.

“When we have lethal control, we’re coming in and killing coyotes or killing mountain lions, that creates chaos in the social structure of the coyote or mountain lion community,” Lute said. “It might even increase conflict when you’ve got these social structures that are upended and unstable.”

“When we get a coyote pack here, our dogs create a relationship with this coyote pack. They [the dogs] know where the boundaries are, and they know what to protect,” she said. “And, actually, the pack keeps the other coyotes away from our sheep.”

But, she said, coyotes in her area are often killed by other ranchers.

“It seems like every eight months we lose a coyote pack. So they kill the resident pack, a new pack comes in, and then the dogs have got to establish, again, their territory and relationship,” she said, which have, in the past, left her dogs injured.

For larger operations, like the 1,000 head of cattle she manages in New Mexico, some livestock losses are expected. But, Greenwood said, those losses can be contextualized within the larger land management practices.

“That’s something an operation has to consider: where is the intersection of economics and their own ethics and what percent loss can they tolerate if it’s in the interest of maybe a more intact ecosystem,” Greenwood said.

She noted that sometimes predators take out livestock that are sick and might have died, anyway.

There are hints that mindsets around predator control are beginning to shift at the federal level, too.

Ranchers in New Mexico and across the U.S. rely on the federal agency Wildlife Services, which sits within the U.S. Department of Agriculture Animal and Plant Health Inspection Service (APHIS), for predator control. Counties and local governments enter into contracts with the agency so that ranchers can call upon Wildlife Services to use lethal and non-lethal methods to remove problem predators.

The agency is known for being opaque about the services it provides and the techniques it uses. It did not respond to requests for comment made by NM Political Report for this story.

“Wildlife Services staff have been working with ranchers on the ground for a really long time,” Lute said. “They also seem to be very reluctant, as an agency, to change their ways, despite the fact that even some of their Wildlife Services researchers are finding that non-lethal [methods] are highly effective and should be used first.”

While they are meant to kill predators like wolves and coyotes, in practice, the bombs attract any scavenger or carnivore in the area. They kill foxes, big cats, carrion birds, and even pet dogs. Consequently, many environmentalists and wildlife advocates consider the bombs to be cruel and inhumane.

Lute said they’re also not especially effective at dealing with predators that are preying on livestock, either.

“They’re really not effective at all. They’re totally non-discriminant,” Lute said. “Like traps and snares and all these other indiscriminate tools — they don’t do anything to prevent conflict. It will just kill individuals, which does nothing to protect livestock and keep potential attacks away.”

Earlier this year, Grant County became the first county in New Mexico to prohibit Wildlife Services from using sodium cyanide bombs and other toxicants to remove predators. The county also amended its contract with the agency, prioritizing non-lethal methods of deterring predation on livestock over lethal methods.

It was the culmination of three years of work by conservation advocates and environmental groups. Lute, who helped launch the campaign years ago, said the development is a start in the right direction.

“We’re starting to see the needle shift just a little bit,” she said, crediting the work of groups like Project Coyote and WildEarth Guardians. “That’s a promising start. It’s one county in one place. It needs to be happening everywhere.”