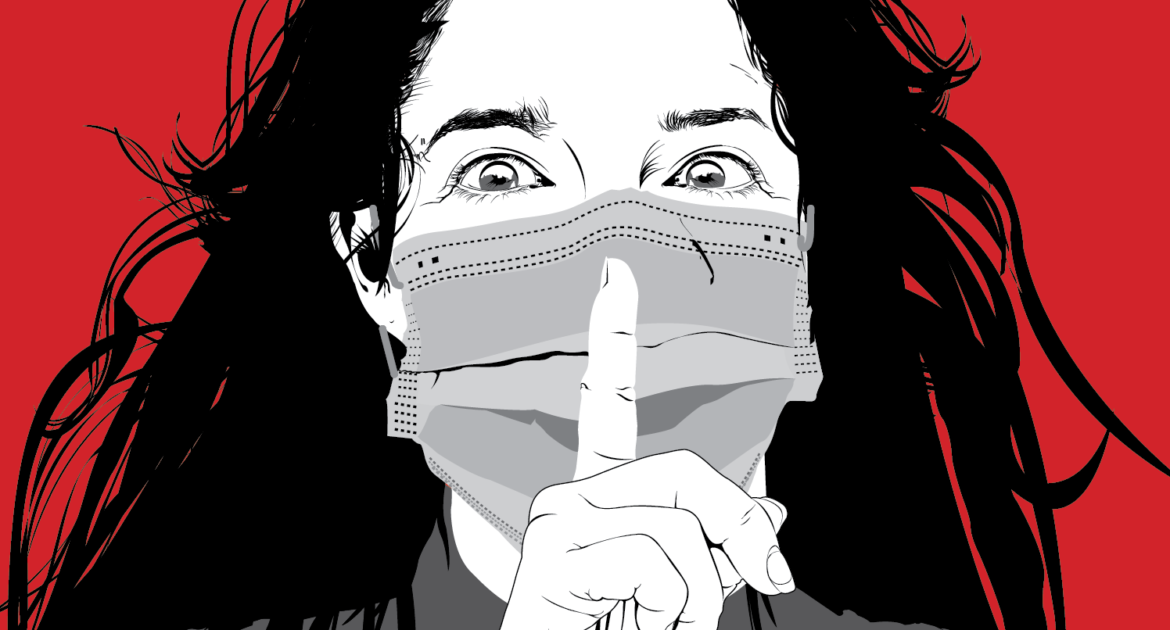 This story is produced by the Indigenous Investigative Collective, a project of the Native American Journalists Association in partnership with High Country News, Indian Country Today, National Native News and Searchlight New Mexico. It was produced in partnership with MuckRock with the support of JSK-Big Local News.

In May of 2020, the Navajo Nation reported one of the highest per-capita COVID-19 infection rates in the United States. Since that milestone, official data reveals that the Navajo Nation has been one of the hardest-hit populations during the pandemic. The Navajo Nation boasts the largest population of any Indigenous nation in the United States, and thousands of Navajos live outside the nation, in towns along the border, cities across the country, and in other parts of the world, making it difficult to tally the virus’ impacts on Navajo citizens.

This story is shared as part of a partnership with Searchlight New Mexico.

It’s made worse by a labyrinthian system of local, state, federal and tribal data-reporting systems that often do not communicate with each other or share information. In an effort to come up with a more reliable fatality count, reporters with the Indigenous Investigative Collective made multiple public-records requests for death records held by state medical examiners of Colorado, New Mexico, Arizona and Utah. Those requests focused on the counties on or adjacent to the Navajo Nation where many Navajo families live. The states rejected those requests, citing privacy concerns, preventing independent analysis of those records to determine death rates. Experts also cite pervasive misidentification of race and ethnicity of victims at critical data collection points, making the true toll of the pandemic on the Navajo Nation impossible to ever know.

The Indigenous Investigative Collective has found that those data problems extend nationwide. As of June 2, the Centers for Disease Control and Prevention estimates that 6,585 American Indians and Alaska Natives have died from COVID-19 — the highest rate of any ethnic group in the United States. That estimate likely falls far short of the actual death toll.

“Even though right now we’re showing as having some of the highest death rates, it’s a gross undercount,” said Abigail Echo-Hawk, Pawnee, director of the Urban Indian Health Institute based in Seattle, Washington, one of 12 nationally recognized tribal epidemiology centers in the country.

That undercount leaves researchers and epidemiologists completely in the dark when creating practices and policies to deal with future pandemics.

When the coronavirus hit the Navajo Nation, Utah Navajo Health System (UNHS) was at the forefront of providing testing. The private, not-for-profit corporation is tribally run and provides services to the Navajo Nation as well as rural Native and non-Native Utah communities. From the start of the pandemic, the UNHS data team reported its information to the state of Utah, local Indian Health Service (IHS) units and the Navajo Nation’s epidemiology center.

“We pretty much tracked anything that we were doing,” Verlyn Hawks, director of health information systems for Utah Navajo, said. “The scope of what we could handle is basically what we did.”

At first it was just test results, then deaths, and now vaccines. Hawks said he and his team reached out to neighboring health-care facilities like Northern Navajo Medical Center in Shiprock, New Mexico, to ask for COVID-19 data from their service area and would provide them with data. From there, he said, data was reported to the state of Utah and then passed to the CDC.

“But we really don’t have a good way to know where our numbers are going and what’s happening from there,” Hawks said, adding that the process for the Indian Health Service was equally opaque. “There’s no sharing between states.”

On the Navajo Nation, efforts to track cases, vaccinations and deaths are also complicated by the fact that community members move freely between health-care facilities, registering at different hospitals and clinics.

“Patients on the Navajo reservation tend to be kind of transient, meaning they go to

Take for example a patient at Utah Navajo who tests positive for COVID-19, becomes ill, and seeks treatment at that Utah Navajo health center. If that patient becomes critically ill, Utah Navajo would transfer the patient to a nearby hospital, and if that patient were to die from COVID-19 complications, the hospital they were transferred to may or may not report the death back to Utah Navajo, where the patient originally registered. The same is true for vaccines and COVID-19 results.

“Our systems can gather all kinds of data and run reports every way but sideways,” Jensen said. “But the transient part of that makes it more challenging, and obviously if somebody passes in an inpatient facility, we’re not notified unless we follow up with the family or the doctor calls.”

IHS, which collects data from Indigenous nations that volunteer to share, instead relies on the CDC’s National Vital Statistics System, which receives its information from states. “We’re not [tracking COVID-19 deaths] because we want to avoid any underreporting,” said IHS Acting Director Elizabeth Fowler, a Comanche citizen and a descendant of the Eastern Band of Cherokee Indians.

The CDC, however, is also likely undercounting. For the Urban Indian Health Institute’s Echo-Hawk, a reliable database is the APM Research Lab, which reported at least 5,477 Indigenous deaths as of March 2, based on figures from all 50 states and Washington, D.C. Around the same time, the CDC was reporting 5,462 deaths.

All deaths, regardless of where they occur, are reported to the state, but the states have refused to release those details. The Indigenous Investigative Collective requested dates, cause and location of death, race, ethnicity, age, gender and a specific request for COVID-related information, including whether or not the infection may have occurred at a work site. Those requests were rejected by records custodians in Arizona, New Mexico, Utah and Colorado, citing privacy and protected health information, obscuring information for COVID-19 deaths in dozens of tribal communities in those four states combined.

New Mexico, in particular, further explained the denial of public records, stating, “The information contained in the responsive records consists of protected health information and information reasonably believed to allow identification of patients.” New Mexico Department of Health Records Custodian Deniece Griego-Martinez said even with names and case numbers redacted, patients could still be identified. “Since this information is identifying on its own and in combination with other publicly available information, it is not possible to redact the responsive records.”

Gaps in states’ COVID-19 data often begin right after a person has died. The process for determining and recording the cause of death varies from state to state. In Minnesota, for example, cause of death is registered by medical certifiers such as physicians, medical examiners and coroners. If a person dies from COVID-19, the cause of death on the certificate may say respiratory or heart failure — the reasons for those failures are not included.

Minnesota funeral director Robert Gill, who is Sisseton Wahpeton Oyate, said when he sits down to fill out vital statistics forms with a deceased’s family members, most of the work is straightforward: legal name, address at the time of death, social security number, next of kin, parents, children, siblings and details of funeral arrangements. Where it can get tricky is when he needs to include the person’s race and ethnicity.

“They could say, ‘I’m Swedish, African, German, Native American, Hawaiian, Puerto Rican all mixed in one,’ so then I’d ask the family, ‘Well what would you like? What are you, what would you legally consider yourself?’” Gill said. There’s no limit on how many races or tribes can be written down, and often everything is included. He also doesn’t differentiate between individuals who are enrolled in a federally recognized tribe or are descendants or simply community members.

“I write down what they would consider their race. Whether it gets recorded as that, I don’t know,” he said. “I send that into the state and I don’t know what they do with it.”

In Gill’s facility, identifying American Indian or Alaska Native people is part of the job. But in other parts of the country where medical examiners or funeral homes have no knowledge of Indian Country, those individuals can be identified as Hispanic, Asian or any other incorrect ethnicity, because medical workers, funeral home directors and coroners simply look at the body and make a decision. While no data exists for death-certificate undercounts of Indigenous people, a 2016 report from the National Center for Health Statistics concluded that of everyone who self-identified as American Indian or Alaska Native on the U.S. Census, 48.6 percent were classified as another race on their death certificate.

“There are so many different ways that these death certificates are improperly categorized for race and ethnicity,” Echo-Hawk said. “But the number one issue ends up being nobody asks the family.”

The CDC website states that “cause-of-death information is not perfect, but it is very useful.” While the agency estimates that 20 to 30 percent of death certificates have issues with completeness, the agency adds: “This does not mean they are inaccurate.” The agency did not respond to requests for comment on this story.

The IHS has tried to correct the problem and continues to do so, with little success so far. In a 2020 COVID-19 response hearing, the chief medical officer for the IHS, Rear Admiral Michael Toedt, testified that the agency was working with the CDC to address the issue of racial misclassification through training. However, Toedt stressed that the main problem with collecting good, timely data for American Indian and Alaska Native deaths rested almost entirely on how the death certificate was filled out.

In short, death counts of Indigenous people, no matter how they died, are woefully inaccurate — and correcting that is likely impossible without a unified system for tracking health issues in Native communities, and regulations requiring death certificates to accurately reflect a person’s Indigenous citizenship, race and ethnicity. Experts who spoke with the Indigenous Investigative Collective could not give an exact number for the undercount.

A 2021 Urban Indian Health Institute report card that grades the quality of collecting and reporting COVID-19 data for Indigenous people gives most states a C grade or lower. The states were graded on the inclusion of Native people and statistics on state health dashboards, as well as accurate CDC data for Indigenous people. That information, Echo-Hawk said, helps leaders make decisions and scientists think through vaccine allocations, and helps measure success or failure in the health system.

The omission of data on Native communities, Echo-Hawk said, is “data genocide,” contributing to the elimination of Native people in the public eye and aiding the federal government in abandoning treaty laws and trust responsibilities. In other words, no data on Native people means no need to meet obligations or provide resources.

“We definitely are in a situation where we are not capturing all of the impacts, and we are not capturing all of the deaths for American Indians and Alaska Natives. So we know that the picture, the true picture, is actually worse than what the data tells us,” said Carolyn Angus-Hornbuckle, who is Mohawk and the chief operating officer and policy center director of the National Indian Health Board. “That information is needed because like every other government that’s facing this crisis, our tribal nations need to have real-time, accurate data so that they can protect their citizens.”

Meanwhile, infection rates and deaths in the Navajo Nation are improving, but Utah Navajo Health System CEO Michael Jensen said their work continues. “We’ve done our own contact tracing to find out where it started and who those people are interacting with. We’ve tried to share that publicly — for deceased rates, I think communities should know what’s going on,” he said.

“I hope everybody would want to provide the most accurate and true numbers possible.”