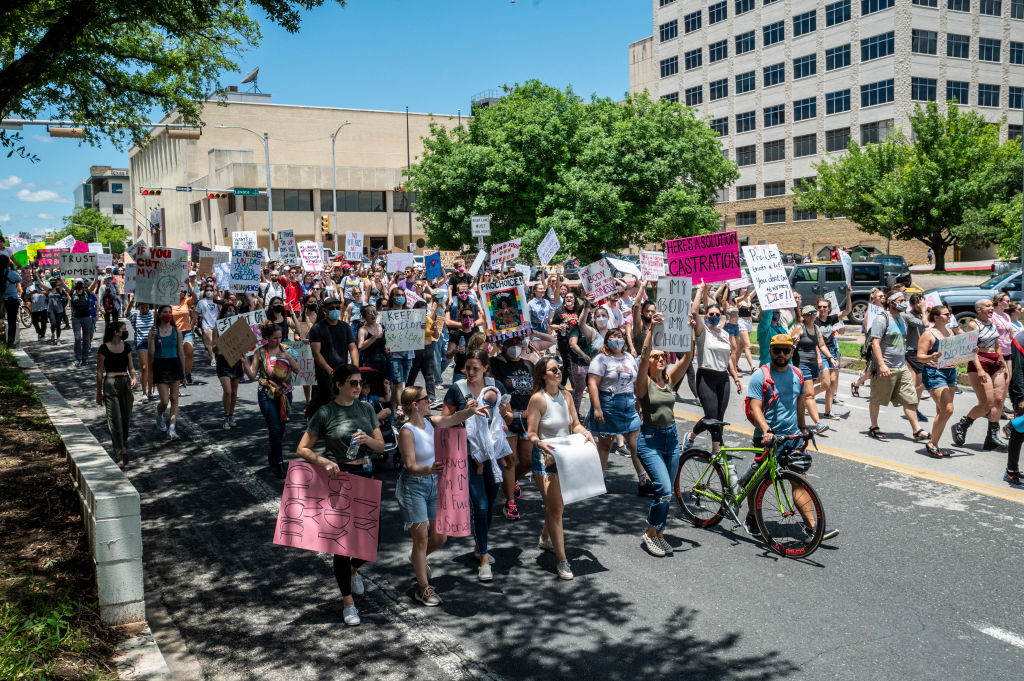 AUSTIN, TX - MAY 29: Protesters march toward the Governors mansion at a protest outside the Texas state capitol on May 29, 2021 in Austin, Texas. Thousands of protesters came out in response to a new bill outlawing abortions after a fetal heartbeat is detected signed on Wednesday by Texas Governor Greg Abbot.

“As Texans fill up abortion clinics in other states, low-income people get left behind” was first published by The Texas Tribune, a nonprofit, nonpartisan media organization that informs Texans — and engages with them — about public policy, politics, government and statewide issues.

At a clinic in Albuquerque, New Mexico, an abortion provider said that on Tuesday, the day before the law’s enactment, every patient who had made an appointment online was from its neighbor state to the east. By Thursday, all of New Mexico’s abortion clinics were reportedly booked up for weeks, and a Dallas center had dispatched dozens of employees to help the much less populated state’s overtaxed system.

But for every Texan who is able to leave town to elude the new law, there are more who can’t.

“That’s the people that have a working car, that can get time off, who have somebody who can take care of their kids,” said Vicki Cowart, president and CEO of Planned Parenthood of the Rocky Mountains, which covers New Mexico, Colorado and Las Vegas, Nevada. “There are going to be thousands of individuals who don’t have that wherewithal, and it’s really particularly going to impact women of color, young women, rural women.”

The Texas law prohibits abortions after doctors detect a “fetal heartbeat,” which can be as early as six weeks along, when many people still don’t know they are pregnant. Experts call the term misleading because embryos haven’t developed a heart by this stage, but do exhibit cardiac activity. The law does not exempt cases where someone was impregnated as a result of rape or incest.

But the state does not enforce the law. Instead, private citizens can sue those they suspect are violating it, ranging from abortion providers to abortion funds and even other civilians, like Uber drivers who drive women to abortion clinics. And under the law, anyone in the country is able to file lawsuits against Texans they suspect of aiding in a now-illegal abortions.

For Republican lawmakers and abortion opponents, the Texas law was a long-fought victory, one of the strictest abortion laws to go into effect since the landmark Roe v. Wade ruling in 1973. When signing the legislation in May, Gov. Greg Abbott said the measure “​ensures that the life of every unborn child who has a heartbeat will be saved from the ravages of abortion.”​

But abortion providers, as well as advocates for the rights of immigrants and Black women, say that the new restrictions won’t establish a de facto ban on abortion for all Texans. Instead, they argue, state lawmakers have created a system that will most heavily affect teenagers and Texans with disabilities as well as further disadvantage poor women of color.

Half of all women in the U.S. who got an abortion in 2014 lived in poverty, double the percentage in 1994, according to a 2016 study by the Guttmacher Institute, a reproductive health research group. Texas health data shows that Black patients accounted for about 30% of Texas abortions in 2020, though 12% of the state’s population is Black. In Texas and the nation, Black women are much more likely to die in pregnancy-related deaths than white or Hispanic women.

“For Black women, we know that our young girls are at risk of losing their futures because they’ll be forced to parent before they’re prepared,” said Michelle Anderson with the Afiya Center, an advocacy group for Black Texans’ reproductive rights. “It will further perpetuate the rate of generational poverty in Black communities … . It also perpetuates the rate of maternal mortality.”

For access to a legal abortion provider after about six weeks, Texas residents now have to be able to spend the time and money to travel out of state. That could take days: State laws in Louisiana and Oklahoma currently require, respectively, 24- and 72-hour waiting periods after an initial appointment before a patient can get an abortion. On the west, New Mexico has no major abortion restrictions, like waiting periods or required parental notification, but most of Texas’ population is closer to the more restrictive states.

Where the average distance to an abortion clinic in Texas had been about 12 miles, according to a report by the Guttmacher Institute, that has now grown to about 248 miles. Beyond driving time and cost of gas, abortions may now require the cost of lodging, child care and lost wages, the institute reported.

Although the new limits on abortion — which providers estimate will ban about 85% of abortions in the state — just went into effect Wednesday, Texas women and neighboring providers had a glimpse last year of what was to come. In 2020, an executive order from Gov. Greg Abbott effectively banned abortion for more than a month during the pandemic, labelling the procedure elective as hospital space became limited. During that time, Cowart said, clinics in Colorado and New Mexico saw a 12-fold increase in patients.

“The folks that went out of state [for abortions] and came back to have follow-up care tended to be higher-income, tended to be white folks,” said Bhavik Kumar, a doctor at Planned Parenthood Center for Choice in Houston, recalling patients he saw after Abbott’s executive order ended.

The patients who simply had to wait for weeks, until the order ended, to have their procedures in Texas “were the folks that were low-income, folks of color, especially Black women,” Kumar added.

Throughout 2020, the number of abortions performed on Texas residents out-of-state nearly doubled, from 654 the year before to 1,226, according to data from the Texas Health and Human Services Commission. The state did not split data by month for out-of-state abortions. Still, the number was relatively small compared with the nearly 54,000 performed in Texas.

About 3% of abortions for white and Black Texans were performed out of state, the health department reported. But while Hispanic women living in Texas had more abortions in 2020 than any other racial or ethnic group — nearly 20,000 — only two left the state for the procedure, the state reported. The health department could not clarify Thursday how other states reported on data about Hispanic people.

Immigrant rights advocates said Hispanic women have lower numbers of out-of-state abortions partly because many immigrants from Central and South America are unable to leave border cities, much less the state, due to federal immigration checkpoints. For others, any health care inquiry, any health care spending can be a burden.

“Outside of the existing barriers for the immigrant population to health care access … there’s already an existing fear to just call [a doctor] and find out [if they’re pregnant],” said Miriam Camero, vice president of social programs at RAICES, an immigrants’ rights group.

The flood of Texans reaching out to clinics in other states began well before the law took effect Wednesday. A Planned Parenthood spokesperson said Thursday that New Mexico clinics were already booked up three weeks out, after performing abortions for a significant number of Texans on Tuesday at the Albuquerque clinic. And one Dallas abortion provider, Southwestern Women’s Surgery Center, sent a dozen members of its staff to a sister clinic in New Mexico to help treat the increase in patients there.

Staffers left Dallas at 5 a.m. Wednesday so they could reach Albuquerque in time to “see as many patients as as possible, who are going to need abortion care that aren’t going to be able to access it here in Texas,” said Allison Gilbert, a doctor at the Dallas clinic.

The staffers plan to stay there for at least three to four weeks, Gilbert said.

Some organizations have started abortion funds to help women with the costs of traveling out of state. The law notes that providers and those assisting women in getting abortions can be sued for violating Texas’ ban; advocates and some providers fear that could include helping women leave the state. RAICES, as well as abortion fundraising groups like the Lilith Fund and Texas Equal Access Fund, are hoping to get women access to abortion who would otherwise not be able to afford it.

Even some private companies like Match Group in Dallas and Bumble in Austin, which are both headed by women, have set up similar funds.

But for many, even if they can get access to funds for a paid trip, the costs will still be insurmountable, said Anderson, with the Afiya Center.

Disclosure: Bumble, Planned Parenthood and Afiya Center have been financial supporters of The Texas Tribune, a nonprofit, nonpartisan news organization that is funded in part by donations from members, foundations and corporate sponsors. Financial supporters play no role in the Tribune’s journalism. Find a complete list of them here.

Join us Sept. 20-25 at the 2021 Texas Tribune Festival. Tickets are on sale now for this multi-day celebration of big, bold ideas about politics, public policy and the day’s news, curated by The Texas Tribune’s award-winning journalists. Learn more.

This article originally appeared in The Texas Tribune at https://www.texastribune.org/2021/09/02/texas-abortion-out-of-state-people-of-color/.