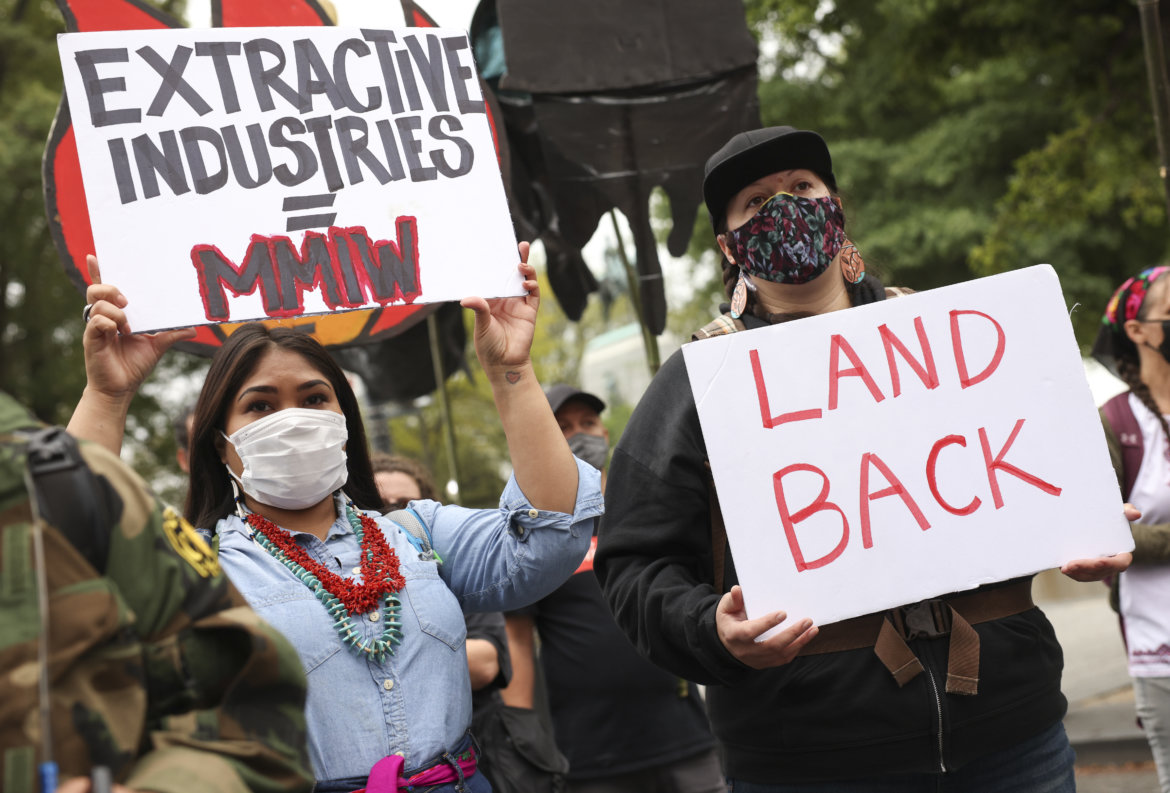 WASHINGTON, DC - OCTOBER 12: Climate protesters march to the White House on October 12, 2021 in Washington, DC. The group was urging the Biden administration to do more to curb climate change and ban fossil fuels.

Native American groups have been protesting fossil fuel production this week in Washington, D.C., in order to help shine a light on the connection between fossil fuel extraction and violence against Native women.

Members of the New Mexico Coalition to Stop Violence Against Native Women (CSVANW) traveled to participate in the protest that began on Indigenous People’s Day in front of the White House to demand that President Joe Biden declare a climate emergency and end fossil fuel production. Many Native leaders from around the country are participating in the week-long protest.

Angel Charley, Laguna Pueblo and executive director of CSVANW, told NM Political Report from the nation’s capital that “we don’t necessarily think of extractive industries as a violence against women issue.”

She said that, for Native women, violence against their bodies is not a matter of “if” but “when.” More than 80 percent – or four of out five Native women – will experience violence in her lifetime. More than half of the approximately 80 percent experience sexual violence, Charley said.

In addition, it is not an issue that Native women are able to transcend through educational attainment or economic stability, she said.

“Rates of violence and sexual violence increase when extractive industries are present,” she said.

She said that, more often than not, extractive industries enter into a region that borders tribal lands. She said that in New Mexico, the Navajo are particularly vulnerable because of fracking and oil drilling happening in the northwest part of the state. The Navajo Nation includes a vast swath of land that includes northwest New Mexico, southern Utah and northeast Arizona.

“Our man camps in New Mexico don’t look like others. There are whole hotels and motels rented out (by oil workers) in border towns,” she said.

A large part of the problem, Charley said, are jurisdictional constraints. A nonnative person cannot be prosecuted on Tribal land.

She said tribes in New Mexico aren’t set up to prosecute nonnatives and some tribes don’t adopt a western system of justice.

“Nor should they have to, but their women shouldn’t be left vulnerable,” she said.

She said last year the U.S. Congress passed two laws, Savanna’s Act and the Not Invisible Act. Savanna’s Act is intended to help facilitate and improve protocols between agencies to address missing or murdered Native American women. The Not Invisible Act of 2020 directs an increase in coordination among agencies to reduce violent crimes on Tribal land and to Native people.

The Not Invisible Act of 2020 was sponsored by former U.S. Rep. Deb Haaland, D-CD1. Haaland is now Biden’s Secretary of the Interior.

Charley said these laws help because “for so many people it’s been too easy to pass the buck for too long,” when it comes to murdered and missing Native women.

She also said there is a lack of adequate funding for missing and murdered Native women.

Despite the somberness of the issue, Charley said the mood in Washington DC, is “a lot of energy” and that it was “good to see so many Indigenous leaders at the front, really leading the action itself.”

CSVANW traveled to the nation’s capital with another group from New Mexico called Pueblo Action Alliance, she said.

Charley said CSVANW is “inspired” after two days of protesting.

“[We’re] ready to continue and bring the fight back to New Mexico. When it comes to gender justice issues, it’s easy to keep it quiet. People want to keep gender violence quiet. It thrives in silence,” she said.