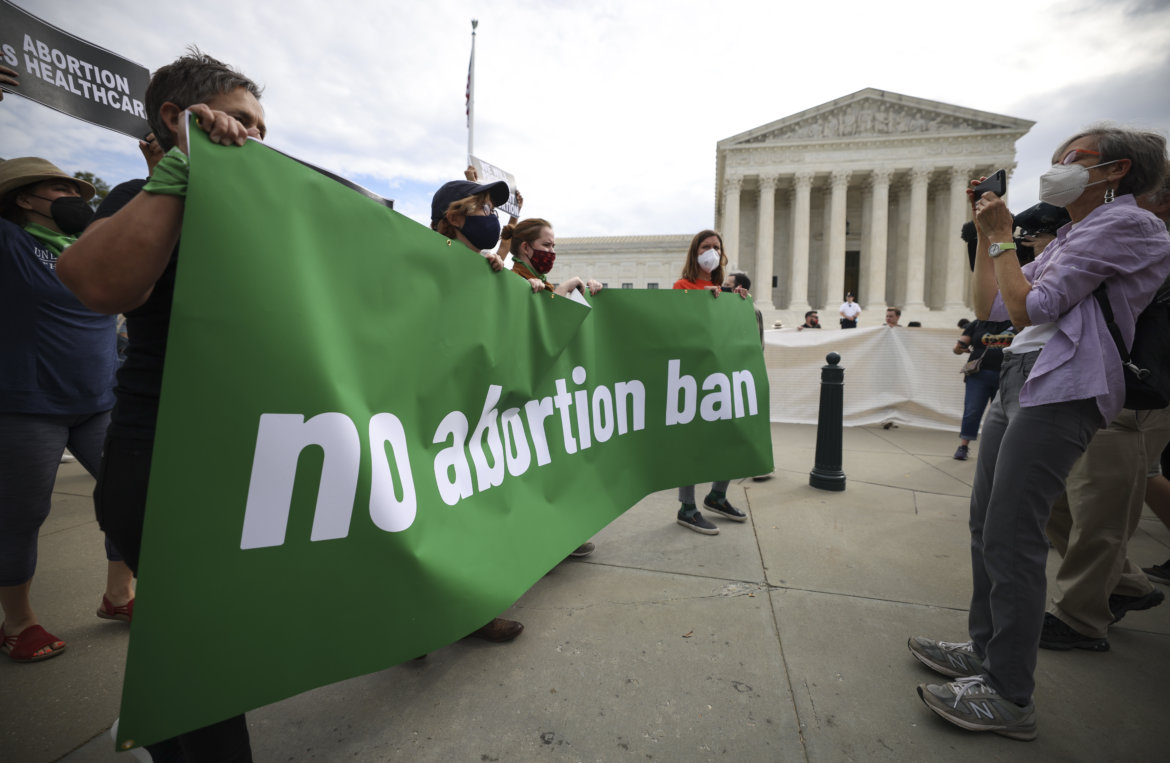 Abortion rights activists demonstrate outside the Supreme Court on October 04, 2021 in Washington, DC.

The U.S. Supreme Court announced on Friday it would hear oral arguments regarding a restrictive Texas anti-abortion law on Nov. 1. But, on the same date, Oklahoma is expected to enact three highly restriction abortion laws.

Reproductive rights groups have sued Oklahoma and, while a judge struck down two of the original five anti-abortion laws earlier in October, the courts are still considering the other three under appeal. More restrictive abortion laws in Oklahoma will not only impact Oklahoma abortion patients but also Texas patients now seeking care in Oklahoma, Mansaneras said.

“We suspect that if the laws go into effect, it will further constrain patients seeking care in Oklahoma and from Texas, with further migration of care coming into New Mexico,” Mansanares said.

Rachel Lorenzo, Laguna Pueblo and co-founder of Indigenous Women Rising, said the abortion fund provider already receives a lot of calls from Oklahoma patients and IWR expects more if the three Oklahoma anti-abortion laws are not stayed or struck down by the court on or before November 1. Oklahoma is home to 39 federally-recognized sovereign nations.

“We get a huge chunk of callers from Oklahoma. It will be more costly for us. How to get more people out of Oklahoma or direct them to resources. We are the first fund they call. Every state is different and every part of the country is different. I definitely see anti-abortion laws impacting how long it takes for someone to get care and pushing them past the gestational limit in their states,” Lorenzo, who uses they/them pronouns, said.

IWR already expanded into providing aid to undocumented people in September in response to the Texas anti-abortion law, in addition to Indigenous people.

“We feel an obligation to include undocumented people as part of our value system. The U.S. has done so much harm across the globe and contributed to the displacement of millions and millions of people. Their lives get disrupted because of war or resource extraction; where else will they go? They’re coming to the U.S. for a better life. The least we can do at IWR, we can step up and make sure they have access to abortion,” Lorenzo said.

Mansanares said the three laws in Oklahoma involve who can provide an abortion and what the patient may legally be required to have, such as an ultrasound. Mansanares said the law requiring doctors who provide abortion to be certified in obstetrics and gynecology won’t affect Planned Parenthood clinics in Oklahoma. But experts have said that law alone is expected to reduce the number of health professionals who can provide abortion to half.

The vast majority of abortions up to the tenth week are medical abortions, which require a health professional to give two pills, mifepristone and misoprostol, to the patient.

Lorenzo said IWR sometimes talks to callers about self-managed abortion. They said IWR talks about “what our ancestors used,” for abortion. They also pointed NM Political Report to websites that are well outside of Texas and Oklahoma jurisdictions where mifepristone and misoprostol can be ordered online.

In New Mexico, PPRM has been offering telehealth abortion care since 2019. That includes an online visit with a health professional who is licensed in New Mexico and is part of a larger study by Gynuity Health Projects. Although the Federal Drug Administration approved mifepristone for use in 2000, the federal agency has continued to categorize mifepristone as a hazardous drug that cannot be mailed. Gynuity Health began the telehealth study to provide more data to the FDA on the drug’s safety. Through that study, Planned Parenthood can mail mifepristone and misoprostol.

Mansaneras said there has been an increased interest in New Mexico to participate in the telehealth abortion study because of the longer wait times to visit a clinic in person. She said, in addition, that there are networks available for patients coming from other states, such as Texas, which do not have access to telehealth abortion. But through the network, a Texas patient can come to New Mexico and receive the pills in the mail. The pills can only be mailed to a New Mexico address.

Planned Parenthood of the Rocky Mountains will begin telehealth in Las Cruces which will include testing and treatment, Mansaneras said. She said PPRM is exploring the idea of opening a brick and mortar clinic in Las Cruces.

Currently there is one abortion clinic provider in Santa Teresa. Otherwise, people in southern New Mexico have to travel to Albuquerque with the six-week gestational ban in place in Texas.

Mansaneras said PPRM is also continuing to explore expanding the clinic it already has in Albuquerque.

But, despite these efforts to expand care, Mansaneras said reaching a tipping point, where abortion clincis are too overwhelmed, is “a very real fear.” She cited the COVID-19 pandemic supply chain issues, the “burnt out, overworked” health care professionals as other issues contributing to a health care system that is now facing these additional pressures caused by anti-abortion laws.

“What we know is that when women are forced to carry a pregnancy they do not want, the majority are already parents seeking to get out of economic struggles. That means a whole another generation is doomed and sentenced to poverty. But when they can access abortion care, they can pull themselves out of poverty, go to school, get a job, that is the nefarious nature of these bills,” Mansaneras said.

For Lorenzo, there is another aspect.

Lorenzo said that on tribal land, prices for ordinary, every day goods, such as food, or menstrual products, can be astronomical comparative to what goods cost on nontribal land. This places an additional burden on menstruating Indigenous people, as well as those seeking abortion care.

“They’re literally in life and death. Literally, they don’t know what their kids are going to eat because they have to pay for an abortion. It’s inaccessible to too many people,” Lorenzo said.