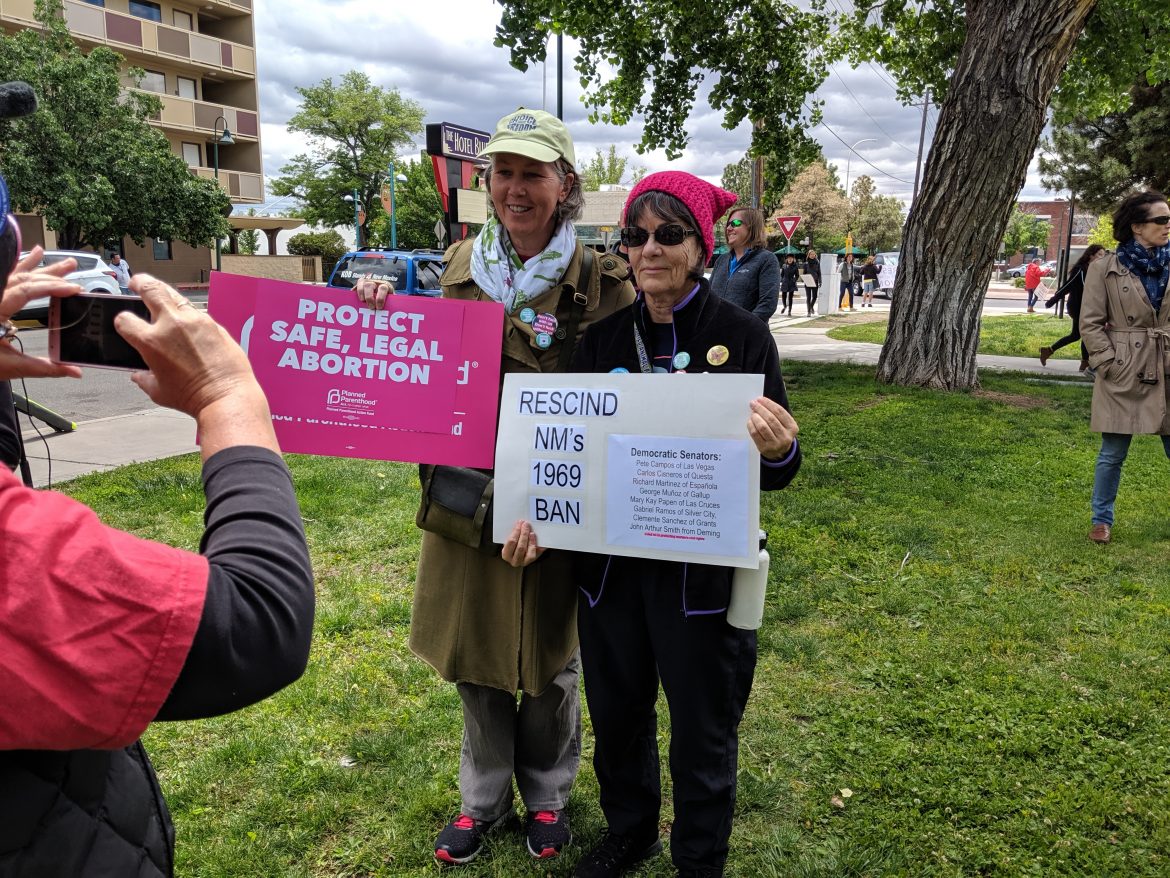 Protesters of abortion bans hold signs, including one that lists the Democratic state senators who voted against repealing a 1969 law outlawing abortion in New Mexico, but is currently unenforceable because of the Roe v. Wade decision.

Medicaid covers the cost of abortion in New Mexico if the pregnant person is a legal resident. But undocumented people who reside in the state, many of whom are often vulnerable, lack Medicaid coverage to pay for abortion care, said Italia Aranda, a volunteer with Mariposa Fund.

The fund helps undocumented pregnant people pay for an abortion. The fund came out of a need that a group of abortion providers in New Mexico recognized in 2016.

“In order for a patient to receive money from Mariposa Fund, they have to seek services in New Mexico. If they’re traveling from another part of the country, we can support them from wherever they’re from, Miami, Texas, Ohio, pretty much everywhere,” she said.

The group of four to six volunteers also receive calls from pregnant people who are in South or Central America. She said in some cases it’s a matter of helping the individuals connect to the right resources.

“If your care is affected by immigration status, we support you,” she said.

Aranda said lacking Medicaid coverage for abortion is “a really big obstacle,” for undocumented people who seek abortion services. Once someone becomes a U.S. citizen, they still must wait five years before they are eligible for Medicaid under the state’s current rules, Aranda said.

Indigenous Women Rising, which maintains an abortion fund to help Indigenous people seek abortion services, recently expanded to include undocumented individuals as well. Rachel Lorenzo, Laguna and co-founder of IWR, told NM Political Report that IWR chose to start including undocumented people in early September because the U.S. has caused the migration of millions of disadvantaged people of color across the globe through its federal policies abroad.

There are a few abortion funds in the state and each one offers different forms of aid to pregnant people seeking abortion. The abortion funds often work together so an individual can receive help to pay for an abortion through Mariposa Fund and then receive aid from IWR or New Mexico Religious Coalition for Reproductive Choice to help them with other needs such as transportation costs or childcare, Aranda said.

“Abortion care doesn’t just stop when [the individual] leaves the clinic. Abortion care is about taking care of that person emotionally and physically,” Aranda said.

Arenda said undocumented people needing abortion care face different kinds of obstacles. Traveling to an abortion clinic could mean, for some, the risk of deportation.

“I’ve had patients who are minors. Their parents are calling, ‘my kid’s documented but I’m not. My child will travel with someone else.’ The parents may not be able to travel through state lines. Many people come with family members they’re not super closely associated with and cross check points. Or they risk deportation. You have to hope and pray that if you don’t have documentation, police won’t stop you. If they do, know your rights 101. Access legal defense, call a lawyer and if they don’t want to tell a lawyer why they’re coming, tell them it’s a medical procedure. Talking about immigration services, it’s super complicated and super scary. They risk their lives trying to access care,” Arenda told NM Political Report.

Aranda said an undocumented person could need an abortion because the U.S. government has deported the patient’s partner and the patient already has several children to raise as a single parent.

“Being forced to continue a pregnancy is another level of uncertainty. How can they access prenatal care? Having a child without family or financial support leaves people in limbo,” she said.

Aranda said New Mexico could include undocumented people in its state Medicaid program. There are a few other states, such as California, that do, she said.

Aranda said the volunteers with Mariposa Fund have worked with staff at abortion clinics in the state about how to ask patients about documentation status in a way that is “respectful and acknowledges their humanity.” She said, typically, a patient doesn’t disclose their documentation status right away to the clinic.

She said this effort has enabled Mariposa Fund to help more patients. In 2016 the fund aided 10 patients.

“Now we see 50 a year. That means 50 people who were able to access abortion despite their status,” she said.

She said that since the Texas anti-abortion law, SB 8, which prohibits a pregnant person from receiving an abortion after six weeks gestation in Texas, Mariposa Fund has seen a significant increase in Texas-based patients.

“I would say we’ve helped way more than 10 or 15 patients. That what we saw in a year when we started we now see in a couple of weeks or a month or two. A large majority are coming from Texas as of right now,” she said.

Aranda said 33 percent of Mariposa Fund clients come from Texas. The majority who seek out the grassroots organization for help are primarily, at 61 percent, individuals who live in New Mexico. Arenda said 5 percent come from other parts of the country.

“People in New Mexico who should have access to health insurance are in the same situation as people coming from out of state,” she said.

Mariposa Fund also began to offer undocumented abortion-care patients the opportunity to receive Long-Acting Reversible Contraception (LARC), such as an intrauterine device (IUD). LARCs can be more costly than other forms of contraception but they are the most effective and do not require on-going effort on the part of the patient.

Aranda said that with the increase in patients from Texas “it’s definitely been a rough time in terms of trying to support patients and trying to access abortion care at different levels of need.”

“If they’re undocumented and have to travel across state lines, there’s the possibility of being deported. It takes a toll. A lot of us providers, hearing these difficult stories, at six weeks having to travel 13 hours to get the care they should be able to get at home. It’s more work to have to safely access services they don’t have access to,” she said.

Aranda said Texas’ SB 8 has hurt abortion patients in ways that can be harder to quantify.

“We see patients struggle. The repercussions go far beyond accessing care. We’re not providing appropriate medical information to folks. Doctors [in Texas] are afraid of being persecuted. It’s really dangerous for people who are undocumented. We’re seeing very detrimental affects on undocumented people. We should be moving together to support patients,” she said.