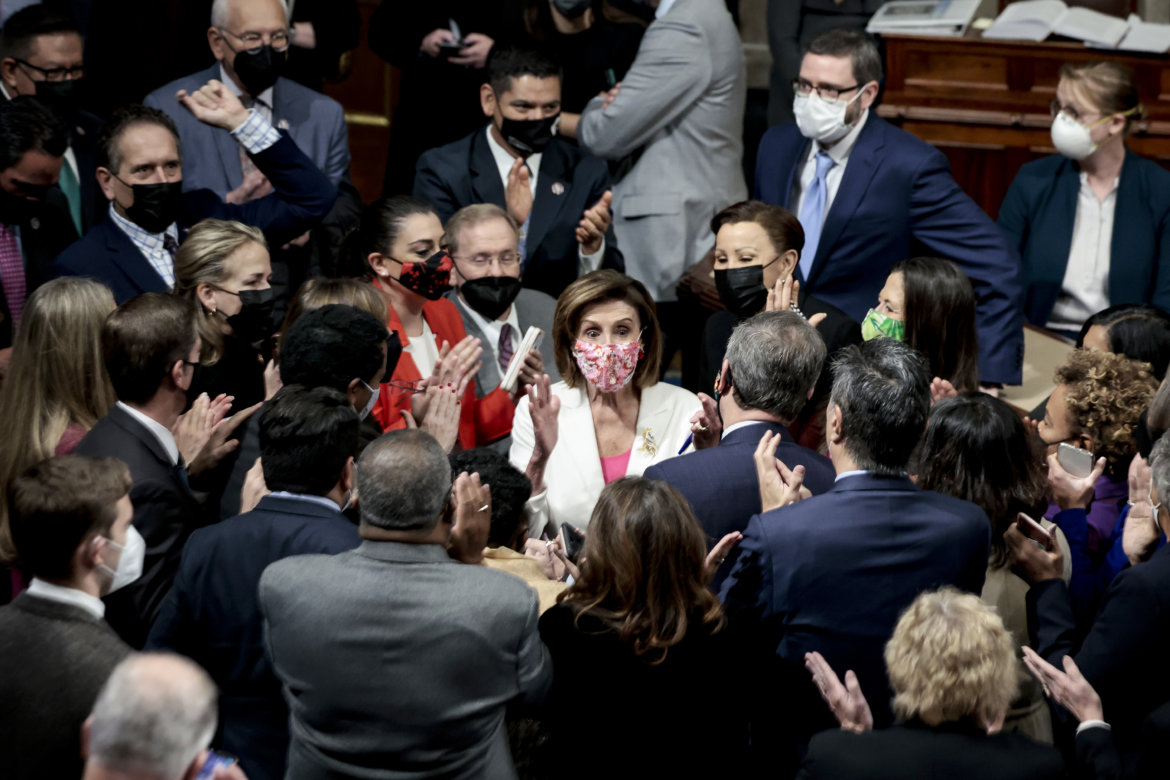 WASHINGTON, DC - NOVEMBER 19: Speaker of the House Nancy Pelosi (D-CA) cheers with House Democrats after the passage of the Build Back Better Act at the U.S. Capitol on November 19, 2021 in Washington, DC.

Legislation that includes dozens of provisions to address climate change is one step closer to the president’s desk following a near-party-line vote in the U.S. House of Representatives on Friday morning.

The Build Back Better Act would provide funding to support working families, increase access to home ownership and address the climate crisis through increasing renewable energy and addressing emissions from the oil and gas sector.

“I think it is not only the largest investment but the most comprehensive investment that we’ve ever seen in tackling climate change in our country’s history,” said U.S. Rep. Melanie Stansbury, a Democrat from New Mexico, in a press conference after the bill’s passage.

Stansbury said the bill includes dozens of provisions targeted at addressing climate change “across every sector of our society and every community within the United States and our affiliated territories and communities all over the world.”

Stansbury said all the sectors that emit greenhouse gases contribute to climate change, including the transportation, energy and electricity sectors.

“And this bill really takes a comprehensive approach to addressing that across every sector,” she said.

She said the legislation includes funding to upgrade the grid and develop clean energy as well as money for states, Tribes and local governments to work on plans to transition their energy sectors. Stansbury also highlighted funding to create the first nationalized infrastructure to “help bring the zero-emissions transportation sector into a reality here in the United States.”

The package also includes legislation that U.S. Rep. Teresa Leger Fernández, a New Mexico Democrat, sponsored to increase bonding requirements for oil and gas wells and to implement an idle well fee. These efforts are intended to reduce the number of orphaned and abandoned wells in the future.

“We cannot continue to litter our beautiful lands and pollute our precious air,” Leger Fernández said.

The bill now has to go through the U.S. Senate and New Mexico’s senators expressed commitment to pushing it over the finish line.

“The Build Back Better Act is a game changer for our country,” U.S. Sen. Martin Heinrich said in a press release. “It will make once-in-a-generation investments in the American people, lower costs, cut taxes, create climate careers, and make the wealthy and corporations finally pay their fair share.”

“As I have said for months: We will get this done, and today we are now one step closer to delivering for New Mexicans,” he said in a press release. “With the support of Americans across this country, this historic legislation will soon be passed by the Senate and signed into law, and it will make a difference in the lives of every community across America.”

U.S. Rep. Yvette Herrell, a Republican from New Mexico, voted against the package. In a press release issued Thursday prior to the vote, she said it will raise the budget deficit and “threatens to explode already skyrocketing inflation into the stratosphere, hurting the savings, retirement funds, and earnings of millions of American families.”

Herrell criticized several components of the bill, including what she said was granting amnesty to undocumented immigrants and what she described as “handouts, bailouts, and special interests to enact Phase One of the so-called Green New Deal.”

On Friday morning, Herrell tweeted that “Build Back Broke will go down in history as more disastrous than ‘Too Big to Fail’ bailouts, Obamacare, and the 2016 Ghostbusters movie combined.”