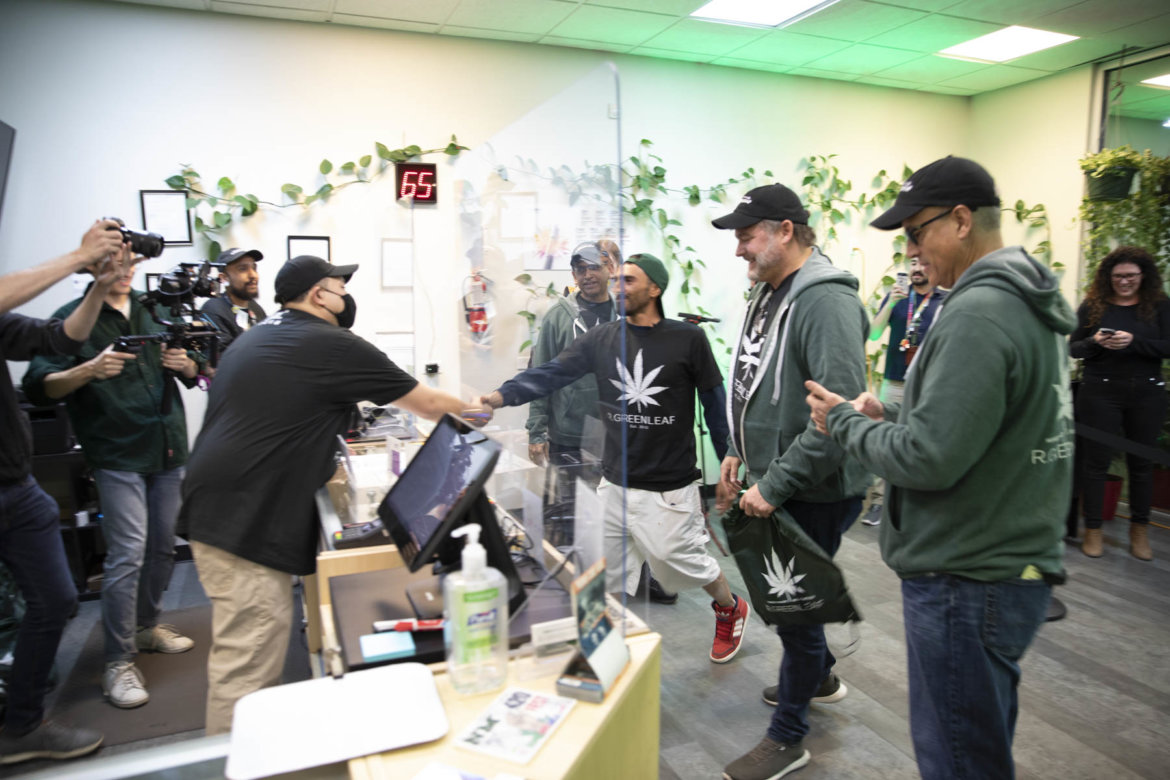 The first person to purchase legal recreational-use cannabis in New Mexico is greeted at the store amid fanfare.

Amid music, balloons, cheering and a final countdown on the clock, Jeremy Sandoval became the first person in New Mexico to buy legal recreational-use cannabis just a few minutes after 12 a.m. Friday in Las Cruces.

Sandoval, who lives in Las Cruces, said he arrived at the R. Greenleaf Organics store near the Mesilla Valley Mall at 6 p.m. He was the first person to show up.

“I’m just excited,” he said. “It’s a milestone. It’s something we’ve all been waiting for.”

When Sandoval walked into the store, he was greeted by a frenzy of local press and Justin Dye, chairman and chief executive officer for Schwazze, which owns R. Greenleaf. Sandoval then talked to the clerk behind the counter for a few minutes, shook hands amid a lot of flashing camera bulbs and made his purchase.

After he finalized his purchase, he told NM Political Report that the experience was “worth the wait.”

Steve Pear, New Mexico division president for marketing for Schwazze, said the company chose Las Cruces for the midnight opening because it is the only municipality where a cannabis store could begin to sell at 12 a.m. Friday. Las Cruces did not set a time period that cannabis stores can be open.

He said his employees were prepared to be there all night if the line continued. He said the store is prepared to sell three to four times what they normally sell in a week just over the first weekend of sales.

Pear said the company began to prepare for the opening a couple of months ago and that they have been building inventory for 90 to 120 days.

Pear said the company has prepared for the expected limited supply for medical cannabis by putting aside 20 percent to 25 percent of product for that clientele, though he added cannabis users have also been preparing as well.

“They’ve done a lot of buying this week,” he said.

Pear estimated that as many as 300 customers were waiting in a line that stretched through the parking lot and around to the back of the building.

Jason Friend, a resident of Hatch, said he drove to Las Cruces to be one of the first to purchase recreational cannabis but he said he “didn’t know there’d be this long of a line.” He was standing near the back of the line a little before midnight.

“This is the first in the state. It’s a pretty big deal for a smoker,” he said.

Jonathan Guzman, a Las Cruces resident, also got into the line a little before midnight and said he does not smoke cannabis.

“I don’t smoke weed. But I might try it. I don’t smoke it but a lot of people say it’s better than beer,” Guzman said.

Brittany Arrieta, also a Las Cruces resident, was waiting in the middle of the line and said she had been there for about an hour. She said she was not bothered by the fact that it was just 57 degrees outside.

“I’m really excited,” she said, adding that she smokes medical cannabis to help with back pain and anxiety.

“I’m excited to see how the city grows,” she said, adding that she thinks legal recreational cannabis will enhance economic growth in Las Cruces.

Recreational cannabis is still illegal in Texas, which is less than an hour away.

“It’s very past time with everybody legalizing it now,” Rivera said.

View all recreational use cannabis articles →