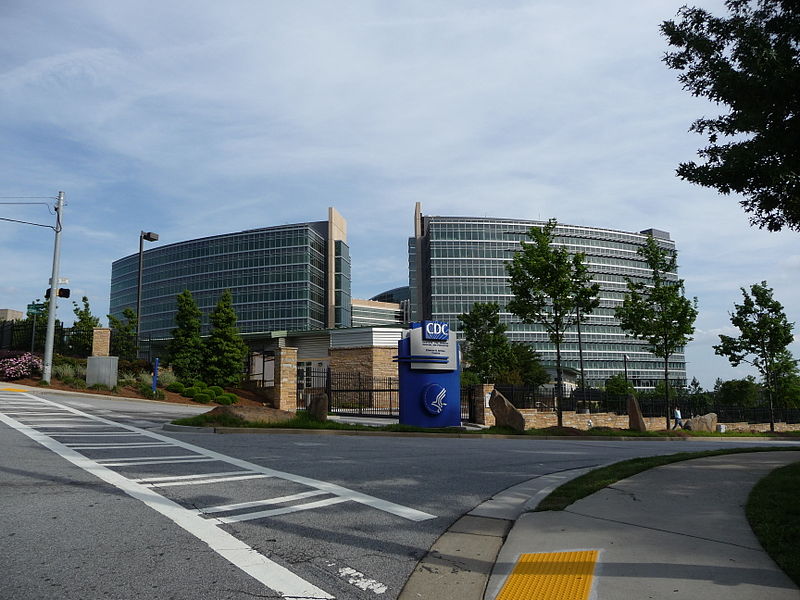 Entrance to the headquarters of the Centers for Disease Control and Prevention. (Wikicommons)

The role that the federal government plays in containing future epidemics will hinge on the outcome of an appeal of this week’s court ruling that overturned the mask mandate for travelers on airlines, trains, and the nation’s mass transit systems.

A federal court judge in Florida said the Centers for Disease Control and Prevention had overstepped its authority in requiring masks on public transportation, a mandate that legal experts considered well within the bounds of the agency’s charge to prevent the spread of covid-19 across the nation.

The CDC said late Wednesday that it had asked the Department of Justice to appeal the decision — a move the DOJ left up to the agency. That will put the issue before one of the nation’s most conservative-leaning appellate courts, the 11th U.S. Circuit Court of Appeals.

Public health experts worry the ruling, unless overturned, will hamper the agency’s ability to respond to future outbreaks.

“If CDC can’t impose an unintrusive requirement to wear a mask to prevent a virus from going state to state, then it literally has no power to do anything,” said public health law expert Lawrence Gostin, faculty director of the O’Neill Institute for National and Global Health Law at Georgetown University.

The outcome of the appeal will shape what the agency does the next time an outbreak occurs. And the ongoing debate highlights a civics lesson: The U.S. gives most responsibility for public health measures to states. The federal role has been more limited but could be further clarified by Congress.

“Congress has authority to pass a law,” said Tony Woodlief, executive vice president at the State Policy Network, a coalition of mainly conservative and libertarian groups. “If they think the CDC does not have enough power, give them more. If they think it has too much, they should curtail it.”

But the case also comes as Congress — and the country — remains sharply divided over just about everything having to do with covid, so passing any kind of legislation could prove impossible. That leaves the courts to interpret what is already on the books.

The latest case, filed in Florida by a group opposed to medical mandates, centers on a federal law called the Public Health Service Act of 1944. The law gives federal officials the authority to make and enforce regulations to prevent the spread of communicable diseases. Those could include “inspection, fumigation, disinfection, sanitation” and other measures that in its “judgment may be necessary.”

Judge Kathryn Kimball Mizelle, a Trump administration appointee to the U.S. District Court for the Middle District of Florida, ruled Monday that the CDC had exceeded its authority under that law. A large section of her decision discusses whether masks meet the definition of a “sanitation” measure.

Federal judges are often called to consider whether a federal administrative action meets statutory requirements. Mizelle’s ruling, while giving a nod to the importance of controlling the covid epidemic, said that wearing a mask “cleans nothing” and at most only “traps virus droplets,” concluding that it “neither ‘sanitizes’ the person wearing the mask nor ‘sanitizes’ the conveyance.”

It isn’t the first time during the pandemic that the CDC has had its authority questioned. The agency suffered a blow last year when the Supreme Court said it overstepped its bounds by imposing an eviction ban during the pandemic.

Jonathon Hauenschild, with the conservative American Legislative Exchange Council policy group, sees connections between the eviction and mask mandate cases. “The CDC used its authority or at least argued that its authority should extend to much more broad public health emergency responses than was actually granted,” he said. The recent ruling, Hauenschild argued, simply offers further definition of the powers the CDC and local jurisdictions have — even during an emergency.

“What this case does is it kind of establishes a baseline that says, ‘We’re going to keep the public health authorities to their statutory grant of authority,” he said. “That’s an important distinction because state legislatures or even Congress have weighed the policy implications. They’ve realized there’s a balance here.”

Other legal experts say this case is a bit different because the CDC’s authority over interstate travel is more clear-cut than any power it might have over rental units. “The transportation mask mandate was a textbook example of CDC’s mandate and its legitimate powers,” Gostin said.

Meanwhile, the requirement to wear masks on planes, trains, and subways is on hold — and major airlines wasted no time in telling domestic passengers they can take them off.

States, not the federal government’s CDC, have the broadest authority over public health efforts to control disease. Their public health agencies, or elected officials, have a range of authorities, including the ability to require masks in schools or businesses. Governors can issue stay-at-home orders during public health emergencies. And health departments routinely track outbreaks of communicable diseases and inspect restaurants for pathogens or vermin.

But states don’t have authority over interstate commercial flights.

“Public health is primarily governed at the local level, but the minute a disease crosses a state line or crosses our national borders, then the federal government has a role,” said Dr. Georges Benjamin, executive director of the American Public Health Association.

The pandemic has caused even state authority to be questioned. Backlashes to local mask mandates and other requirements have prompted more than half of states to roll back public health officials’ powers.

“One day there will be a really scary virus that will come to the shores of the U.S. and we will look to the CDC to protect us and what we’ll find is an agency that is frightened to act, gun-shy, and always looking over its shoulder,” Gostin said.

He and other public health experts said it might also be time for Congress to review and clarify the agency’s authority.

“Traditionally, CDC’s got very little power,” said Glen Nowak, co-director of the Center for Health and Risk Communication at the University of Georgia. He spent more than a decade working in communications at the CDC, including during the 2009 H1N1 flu pandemic.

“Most of what CDC does really is about, ‘Here’s our recommendation — we strongly urge you to comply,’” he said. “And then it’s up to typically state and local health departments or states in general to figure out how you’re going to achieve high compliance.”

But such recommendations rely on trust in agencies, something that has cratered during the pandemic. And, said Nowak, public health measures at all levels — federal, state, and local — have landed in court, in part because of misperceptions about how willing the American public would be to comply. “A lot of it was based on assumptions about compliance — that there would be high compliance by the public, that they would share the sense of urgency, and would place a high priority on stopping the spread of a virus,” Nowak said.

The American Public Health Association’s Benjamin said there’s little time to waste. He said the reason public health officials need established lines of authority is because public health emergencies — whether that’s the emergence of a new variant of covid-19 or some future pandemic — require quick action.

“We will not have time to fool around with the courts making a decision,” he said.

This story can be republished for free (details).