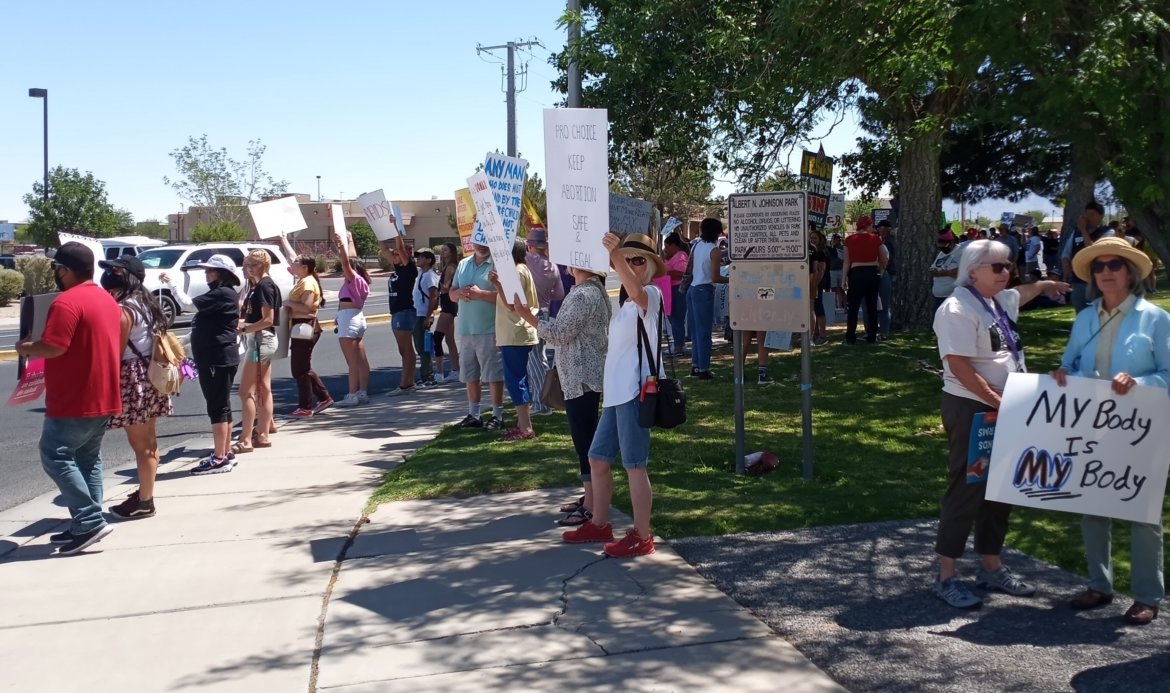 More than 200 individuals protested the potential “roll back” of abortion rights on Saturday in Las Cruces.

The U.S. Supreme Court’s draft decision, leaked in early May, on Dobbs v. Jackson Women’s Health Organization indicated the court will likely overturn the 1973 decision that expanded reproductive rights in the U.S. nearly 50 years ago. Within 24 hours about 100 people gathered outside of the Las Cruces City Hall to protest. The protest this past weekend brought out more people. Thousands protested in cities all across the U.S., including Albuquerque.

Amid honking horns at the corner of Main Street and Picacho Street, protesters held signs. One couple held an anti-abortion sign and talked through a megaphone but the protest was peaceful.

One Las Crucean protestor, Jamie Bronstein, told NM Political Report that “we are at a real crisis point when it comes to reproductive rights and personhood.”

“If you don’t have the ability to decide when and if to have a child, you’re not autonomous,” she said.

Natalie Gutierrez said she came out to the reproductive rights protest in Las Cruces to “protect my rights as a woman.”

Ayanna Leal, 18, said she attended the protest because “this world is turning into [the TV show The Handmaid’s Tale]. The Handmaid’s Tale, based on the novel of the same name by Margaret Atwood, is about a group of women who have no freedom or rights in a Christian fundamentalist theocratic regime.

“And that’s the most disturbing thing I have ever said out loud. Fuck the partriarchy,” Leal said.

Gauge Burnett, 24, is a New Mexico State University student and a transgender man. Burnett said “so many other rights will be curtailed.” He said this state has “solid protections,” which makes protesting important because it is “safe to be outraged” in New Mexico.