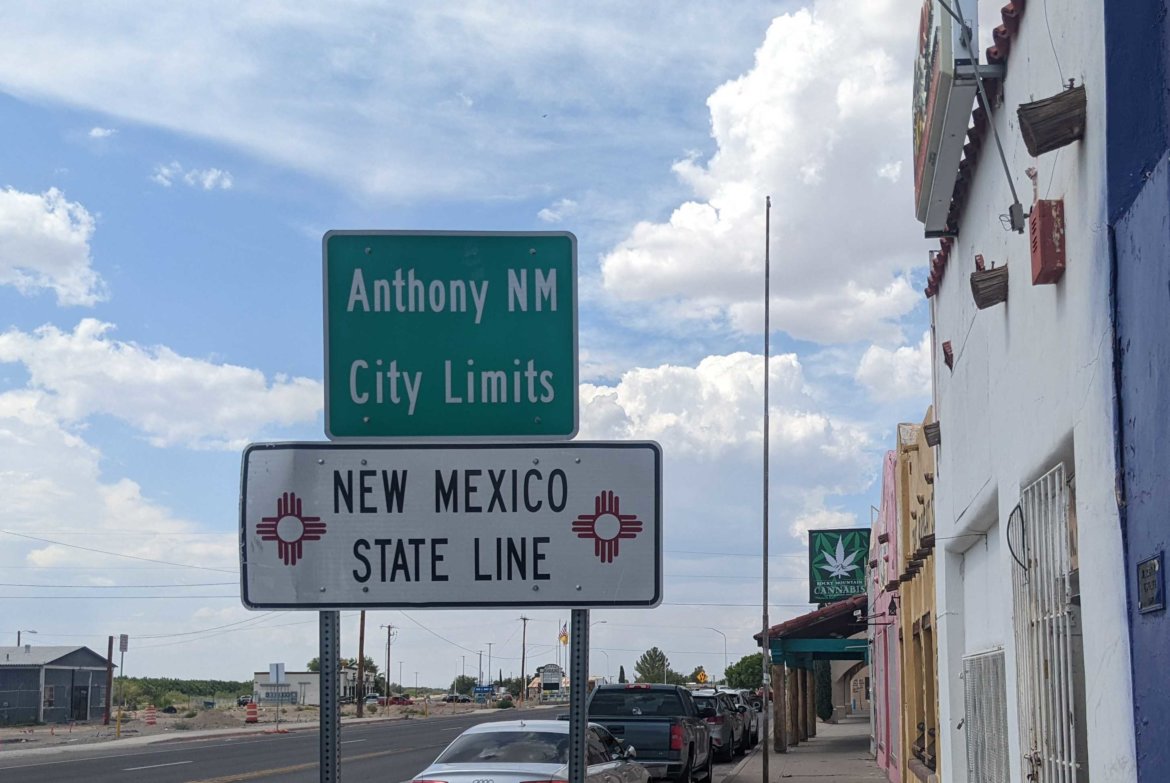 The city is so close to El Paso, Texas that it is oftentimes hard to tell where the two cities’ boundaries are without looking at a map. In fact, just north of the Sunland Park Racetrack and Casino, is the Stateline restaurant, which has an El Paso address, but a portion of the restaurant actually lies in New Mexico. Across the Rio Grande from the racetrack are just a few examples of how El Paso blends in with Sunland Park.

In one neighborhood there are a series of streets that start in New Mexico, but dead-end in Texas, making it nearly impossible to get to several houses in Texas without first traveling through Sunland Park.

The seemingly invisible border between the two cities is one reason some in Sunland Park are excited about an expected influx of cannabis retail stores in Sunland Park after adult-use cannabis became legal this year. There are currently only a few operational cannabis dispensaries in Sunland Park, but according to some accounts, there are nearly 30 more companies looking to open for business within walking distance from both Mexico and Texas.

While it’s abundantly clear that recreational-use cannabis is still illegal in Texas, there is a gray area when it comes to the legal status of cannabis in Mexico. The country’s lawmakers have repeatedly fallen short of codifying the plant’s legal status, but the Supreme Court of Mexico voted 8-3 to legalize adult-use cannabis. For many in Sunland Park and the similarly situated town of Anthony, New Mexico, the hope is that Texas and Mexico residents will visit New Mexico and bolster revenues by frequenting cannabis retail stores.

Earlier this week NM Political Report met with former Sunland Park city councilor Christian Lira, who now runs a business consulting firm that partially specializes in cannabis. Within a short drive with Lira, he identified more than half a dozen buildings where cannabis businesses plan to open grow operations and storefronts.

Lira said more cannabis businesses mean more jobs, for both the businesses themselves as well as jobs remodeling and constructing new spaces.

“It’s not only cannabis, I mean, Sunland Park is just exploding,” Lira said.

He said the city was once a place for migrant families to make a new home in the U.S.

“Over 40 years ago, there was no fence,” Lira said. “People could actually just migrate from one side to the other.”

More recently though, Sunland Park has received negative attention. In 2015, a mayoral candidate pleaded guilty to extortion charges after he secretly filmed his opponent getting a lapdance from a woman and threatened to release the footage unless his opponent dropped out. Lira himself faced domestic abuse charges but was later found not guilty. In 2014, the Associated Press reported that Lira dismissed references to the charges from his political opponents as “dirty politics.”

But if all goes according to plan, Sunland Park could make a new name for itself as an oasis of cannabis. Nearly every turn Lira made while driving around a commercially zoned area of the city was punctuated with him pointing out another future cannabis dispensary.

“This is going to be a dispensary,” Lira said, pointing at an empty building.

“This is going to be a dispensary and a grow,” he said of another vacant building. “That’s a dispensary right there across the street, those people are from Denver.”

In one area of the city, Josh McCurdy, a cannabis growing consultant, was overseeing the build-out of an 8,000-square-foot facility flanked by a stone countertop manufacturer and an empty lot. McCurdy said he will manage the facility on a contract basis and plans to harvest once a week and “pull anywhere between 20 to 60 pounds a week.”

“I’m trying to get the highest gram per square foot in the state of New Mexico,” McCurdy said.

“I think how we’re trying to look at it is an opportunity for additional revenues and a niche that doesn’t exist in the borderland region right now,” Perea said.

For years leading up to the enactment of New Mexico’s Cannabis Regulation Act, proponents of legalization touted increased revenue for things like behavioral health services, education and sometimes even law enforcement as reasons to legalize cannabis. The Legislature has not yet earmarked revenues from the state’s cannabis excise tax but is expected to do so next year.

Perea said he’s hopeful not only that cannabis tax revenues will help pay for needed services in the city, but that cannabis tourism in Sunland Park will create the need for more restaurants and hotels for out-of-state visitors. He acknowledged that some in the cannabis industry might see the city’s cannabis ordinances as overly restrictive, but said he disagrees with that sentiment.

“I don’t think there’s a lot of restrictions imposed by the city,” Perea said. “For the most part, you can be in any of the commercial zones across the city. So, that’s across our 15-mile stretch in the entertainment area. I mean, pretty much every commercial space is okay.”

Perea also pointed to a provision in the city’s ordinance that allows cannabis businesses to operate out of temporary modular buildings while a permanent structure is built.

It’s unclear where the oversaturation point is for cannabis in Sunland Park, but already, with only a few cannabis dispensaries, the city has reportedly accounted for more than $1 million in cannabis sales each month since adult-use sales began, according to numbers from the New Mexico Regulation and Licensing Department. Those numbers also show that more than 80 percent of cannabis sales are non-medical. Even though Sunland Park has consistently been among the New Mexico cities with the most cannabis sales, one of its neighbors to the north is currently outperforming Sunland Park when it comes to the percentage of recreational-use sales.

Less than 20 miles north of Sunland Park, in Anthony, New Mexico, it would be easy to unknowingly walk into Anthony, Texas if it weren’t for street signs noting the border between the New Mexico city and the Texas town.

Driving north through Anthony, Texas is a sign marking both the New Mexico border and the Anthony, New Mexico city limits. But about 200 feet beyond that sign on the New Mexico side, is a large sign with a cannabis leaf on it. That sign is for Rocky Mountain Cannabis, a Colorado company that opened its Anthony, New Mexico store in mid-April. The store’s manager Robert Lozano who was raised in Anthony, New Mexico, said the store’s staff tries to warn customers not to drive, or even walk in the wrong direction after purchasing cannabis. If a customer were to park on the Texas side of the border, purchase cannabis in New Mexico and simply walk back to their car, they would not only be violating Texas law for possessing cannabis but also federal law for crossing state boundaries with cannabis.

“We make sure all of our customers know that this is a New Mexico facility,” Lozano said. “You should consume in New Mexico, and we always tell everybody to head north to just see what Anthony, New Mexico has the offer. We don’t recommend going back into Texas because the people have seen that when you turn into Texas they will get pulled over.”

According to the most recent U.S. Census data, the population of Anthony, New Mexico is about 8,000 residents. That same data shows that about 37 percent of residents live in poverty and the median household income is about $37,000. Lozano said he hopes that cannabis sales will help bolster the small town’s economy and that he sees widespread potential, not just for cannabis and ancillary businesses.

“The restaurants are getting crazy amounts of business,” Lozano said. “So, it’s good for everybody.”

About four miles north of Rocky Mountain Cannabis and the Texas border is another cannabis retail store, tucked away in a modest strip mall.

Given James Flores’ love of baseball, it makes sense that he named his store Top of the Eighth, a play on words that references both the eighth inning of a baseball game and an ⅛ of an ounce, often referred to as an “eighth.”

Flores grew up in both Anthony and La Union, a small community about 10 miles south of his store. Flores, who said he and his wife were “high school sweethearts,” exhibits a strong drive to improve his community and said he thinks revenue from cannabis can do that.

“I would love to see our city prosper,” Flores said. “Better streets and more police officers on the street, I think would help immensely.”

Flores said as long as he can remember, Anthony, New Mexico has lacked even the most basic resources.

Flores said living on the Texas border, “you learn to love both states” and estimates that about 60 percent of his customers are from Texas.

“The community is so tight-knit here, you know them somehow. You know, ‘My cousin sent me here, my cousin said he went to school with you,’ or different stories like that,” Flores said.

Flores loves baseball so much that he considered sponsoring a youth league baseball team, but that it would likely violate state law since it is illegal to market cannabis in a way that is enticing to children. Even when talking, Flores often inadvertently makes baseball references, like when he said he hopes his store and other cannabis retail stores “really knocking it out the park” will help Anthony prosper, or when he pointed to his background in educational compliance as the reason he “knocked it out the park” during a recent inspection from the Cannabis Control Division.

Flores’ optimism for the financial potential of cannabis even extends to the early pitfalls of his business. Flores said he originally planned on opening his store near the Texas border, in the same space Rocky Mountain Cannabis is. After a stint in the ICU for issues with his spinal cord, Flores said, the deal fell through, which he called “a blessing in disguise.” While Top of the Eighth is not visible from the border, Flores said he now has more space to host community events like car shows and concerts, both of which have already happened in the store’s parking lot.

And while he may not be able to give money directly to the community, he said he’s fine with filtering that money as tax revenue through the city, because he wants his kids and others their age to have more options than prior generations.

“The shitty part is, about here in Anthony, you’re either a gang member or you’re addicted to meth,” Flores said. “Those are the only two outlets here.”