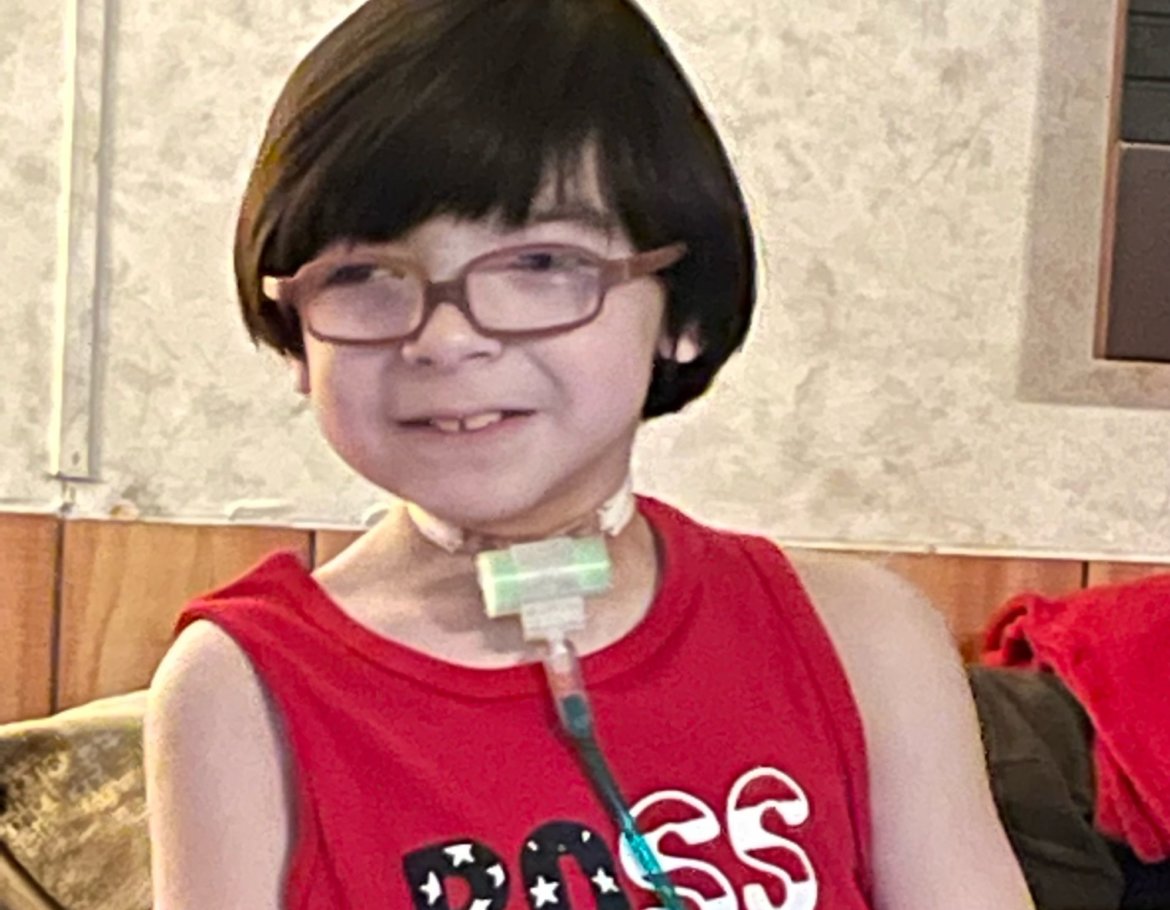 Tiffany Crisostomo's son, who is medically fragile and requires formula for nutrition.

Two parents talked to NM Political Report about their ongoing struggles to find specific formula to provide nutrition to their children in the midst of the shortage. Kelly Dutro, a parent living in Albuquerque, said finding the specific formula her daughter can digest has been “really painful,” over the last few months.

Dutro had one can left of the hypoallergenic formula her 8-month-old needs when she learned last week that that can was part of the company recall in February.

Dutro’s daughter’s allergies means that the Dutro family is dependent on only one brand of formula. It is the formula that manufacturer Abbott recalled in February.

An added layer of distress for the Dutro family is her own health – she learned she has cancer while pregnant. She breastfed for the first few months but, under doctor’s orders, she had to return to cancer treatments, which meant switching her baby to formula.

“Having to stop breastfeeding was horrible. I cried when I took that pill again. I knew as soon as I put it in my mouth I couldn’t feed my baby. I can’t find the formula she needs; I can’t breastfeed her. I’m trying to find formula because I have to. I have to do that,” Dutro said.

Another parent from Albuquerque, Tiffany Crisostomo, has struggled to find formula for her differently abled son, who is 10. Crisostomo said that her son inherited a genetic disorder and must be fed through a feeding tube. He is medically fragile and not able to eat solid foods. He can only digest a very particular brand of formula and it is also one of the recalled products. She called the experience “terrifying.”

“We were left scrambling with no backups [in February]. It was awful. It still is because it [the recalled formula] is the only thing he tolerates,” she said.

Crisostomo said she wishes more people were aware that the crisis doesn’t just affect infants. She said her family feels left out of the conversation.

“I know that babies are important. It’s their only source of nutrition. But just because the name is ‘infant formula,’ it throws people off. It’s hard when you’ve sacrificed everything to make sure he’s okay. People are overlooking it; not seeing the big picture,” Crisostomo said.

Monica Esparza, executive director of the nonprofit Breastfeeding New Mexico Task Force, said she is seeing an increase in families looking for lactation care services due to the formula shortage. She said the frequent lack of workplace accommodations for breast and chest feeding is a complaint she’s been hearing a lot from families in the midst of the crisis.

“They deserve to have the right to pump in the workplace. We see a lot of calls around that,” Esparza said.

But for families such as the Dutros and Crisostomos, lactation is not possible. And while some pregnant people have donated extra breast milk, neither the Dutro family nor the Crisostomo family can rely on such measures.

Dutro said her 8-month-old is allergic to so many foods, from dairy to corn to soy, that it would be nearly impossible to screen a breast milk donation for all the things her daughter reacts to.

“I might as well try formula I can find on the shelves, because I know exactly what’s in it because it’s on the label,” she said.

Crisostomo said, similarly, that donated breast milk is not an alternative.

“He [her son] has so many [health] problems, introducing anything new to him, it’s a shock to his system,” she said. “He doesn’t tolerate anything new.”

Systemic lack of support for breast and chest feeding

The shortage began in February when Abbott closed its plant due to an infant death believed to be related to contaminated formula. Since then, the plant faced a second hurdle due to flooding in late June. But Esparza said the issues around formula shortage could have been prevented “had systems been in place.”

Esparza said 84 percent of New Mexico families initiate breast or chest feeding. But within six months, only 30 percent are still breastfeeding, she said.

“The pressure to get back to work for needed income and with no paid leave. Birthing families don’t have the option. Breastfeeding isn’t free. It comes with time and challenges and invested time when systems are not in place – are not there to support that,” she said.

New Mexico’s Paid Sick Leave Act recently went into effect earlier this month, which allows workers the ability to earn up to 64 hours of paid sick leave per year.

But Esparza called that a “baby step.”

“It’s important but not enough to really establish breastfeeding. Families need more than a couple of days. To really establish milk supply takes about six weeks and to get comfortable with it takes even longer,” she said.

Esparza said other countries provide a year or two years of paid family leave at the birth of a child.

“Families need to provide what is best for the infant, what we know is the safest, healthiest option,” she said.

Esparza said the larger systemic problem is an equity issue because communities of color are more likely to face barriers to forms of support, such as paid family leave that provides time from work to get comfortable breastfeeding. Another barrier for communities of color is finding a lactation specialist who can help the parent.

“Data shows outcomes are better when families speak the same language [the lactation specialist] speaks and looks like them. People of color are less likely to access that person and, if they do, it is less likely the person will resemble them and understand their culture and cultural intricacies that go hand-in-hand with breastfeeding,” she said.

Esparza said New Mexico was “very proactive” when the shortage began and started a Facebook group which enables parents to alert other parents of certain kinds of formula they’ve found on the shelves.

“What I’m seeing is families who need specialty formulas are the ones impacted the most,” she said.

Dutro and Crisostomo fall within that category.

Dutro said she wasn’t scared until she learned of the plant’s second shutdown in June due to floods.

“Now we have about a month’s supply,” she said.

“We have to decide between our baby being constipated and our baby eating. What are you going to do?” Dutro said.

She said giving her baby the powder formula is also hard because her daughter resists it.

“She turns her head away. She closes her lips and cries. I try again, she closes her lips, refuses to drink it, cries and screams,” Dutro said. “She’s a picky baby. If she gets hungry, she’ll drink it. But why do we have to be at that point?”

Dutro said she is considering switching her daughter to goat milk, even though goat milk is not pasteurized and, because of that, not recommended.

“I have a friend with goats. We might have that as one of our trials to see if that will work. It’s so hard because everything says, ‘don’t do this,’” she said.

Dutro said she feels the government has failed families.

“I mean, this is the U.S. The wealthiest country in the world. I never thought a family in the U.S. that was financially comfortable would have food insecurities,” she said.

Both Dutro and Crisostomo said they have seen price gouging since the shortage began in February. This has impacted Crisostomo because, she said, her family is low income.

“He’s already underweight because he’s medically fragile. When he doesn’t tolerate something, he loses the weight he just gained,” she said.

But, it’s his only source of nutrition.

“He doesn’t get anything by mouth. It’s extremely nerve wracking. It’s so expensive I can’t just go and blow $400 for four day’s worth of food,” she said.

The Crisostomo family also must pay for their child’s medical equipment rental, in addition to the usual expenses of rent and utilities. She said her family lives paycheck to paycheck. She said she had paid down a credit card but had to run it back to its limit because of the extreme cost of formula in recent months. She also depleted the small savings she had been setting aside to pay for travel for an upcoming out-of-state surgery for her son.

“We did everything they told us to do. We talked to our pediatrician, our dietician. It came down to everybody saying ‘talk to your pediatrician.’ They just say, ‘there’s nothing we can do either. We can’t help you.’ We’re low income. Money is tight as it is,” she said.

Crisostomo said another aspect for her is that her son understands the problem.

“He’s fully competent. He’s very, very smart. He gets extremely anxious if he hears me and my mom talk about it. What do you tell a child asking you questions? When he feels something is off, his immediate thought is, ‘I am going to die,’” she said.

Crisostomo said that when the shortage began in February, her family first learned of it on a Friday. They had just received a one-month supply of the brand they require and found that “every single can was on the recall list.”

She said she spent the weekend trying to make phone calls for help.

President Biden announced in the spring that the federal government would help by shipping in formula from Europe. But Crisostomo said the formula from overseas has not been helpful to her family because it is a brand her son cannot tolerate.

“I don’t really know what to do anymore,” she said.